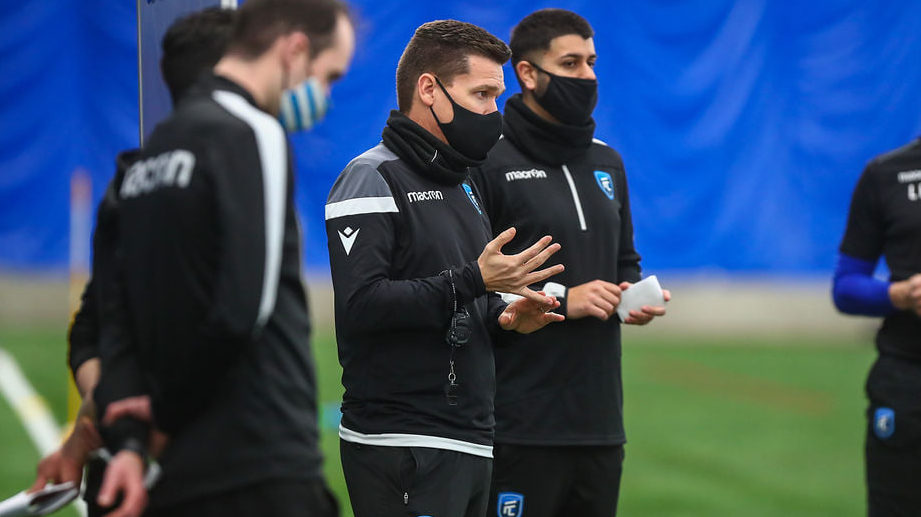 The wait is finally over for Alan Koch – well, it’s one of several waits for the new FC Edmonton coach, who has been able to get his players on the pitch for the first time as gaffer ahead of the 2021 CPL season.

FC Edmonton has 21 players in its pre-season training camp which was formally announced Monday, saying it has been “adhering to strict return to training protocols” in place from CPL officials and Alberta Health, the province’s health authority.

The club took on a phased training approach similar to what the CPL clubs did in return-to-training routines in 2020. Starting in smaller groups, the Eddies have slowly ramped up to full training with “very, very stringent daily protocols” according to Koch who has finally been tasked with a team on the pitch since occupying the vacant head coaching position last November.

“We’re making sure we’re monitoring everybody and keeping everyone safe and healthy as we progress,” Koch told CanPL.ca. “It’s definitely not the perfect environment and I doubt it’s any coach’s dream to take over a club in a pandemic… But we’re trying to build something and we’re working in a very unique situation. The different variables are moving all the time and it’s certainly not easy but it is what it is.

“The key is trying to maximize every day.”

The Eddies kicked off training at the Edmonton Soccer Dome and are expected to move to Clarke Stadium, the club’s home stadium, in the coming weeks.

A total of 21 players are currently in FCE training camp, including ten returnees from the club’s 2020 campaign which saw a Jeff Paulus-led side finish last at the Island Games with an 0-1-6 record. The group also features a series of high-profile additions, including former CF Montreal midfielder Shamit Shome and winger Fraser Aird.

Edmonton’s cohort is two shy of the maximum number of squad players CPL clubs can carry. Koch said they are keen to fill those remaining spots to get to a 23-player roster for the start of a season.

“I anticipate when we start playing games we’re going to play a lot in a short amount of time,” Koch said, harkening back to the condensed Island Games. “So we’re going to need a full roster probably this year more than ever.

“Will they be local players or will they be from outside? Well, we’ll assess players case-by-case because with travel challenges and getting people into our cohorts it’s definitely not that easy.”

That 21 number is painfully one player shy of what’s needed for an 11-on-11 scrimmage. While smaller-sided games will suffice in the short term, Koch is eager to get proper games and, ultimately, flesh out his style of play.

“Thankfully I’ve got a couple of younger assistants to take that 22nd spot – if we need to use some of them we’ll use some of them,” Koch said with a laugh, referring to Brendan Shaw. Jay Bhindi, and Lars Hirschfeld – though the latter has 48 caps for Canada as a goalkeeper, a role filled by Connor James and Darlington Murasiranwa.

“We are trying to implement a little bit of a style of play… we’ll be playing intrasquad games trying to get as much as we can and create as many situations in training as we can but they’re all artificial because, at the end of the day, we need games.”

Two other CPL clubs have returned to training: HFX Wanderers FC and Atlético Ottawa. Halifax began last week, while Ottawa is currently based in Spain with the club’s parent organization, Atlético de Madrid.

FC Edmonton is excited to announce that they have begun preseason training! Training is currently taking place at the Edmonton Soccer Dome, and will be moving shortly to Clarke Stadium, the home field.

A total of 21 players are currently in training camp. pic.twitter.com/lhv9bzFPmG