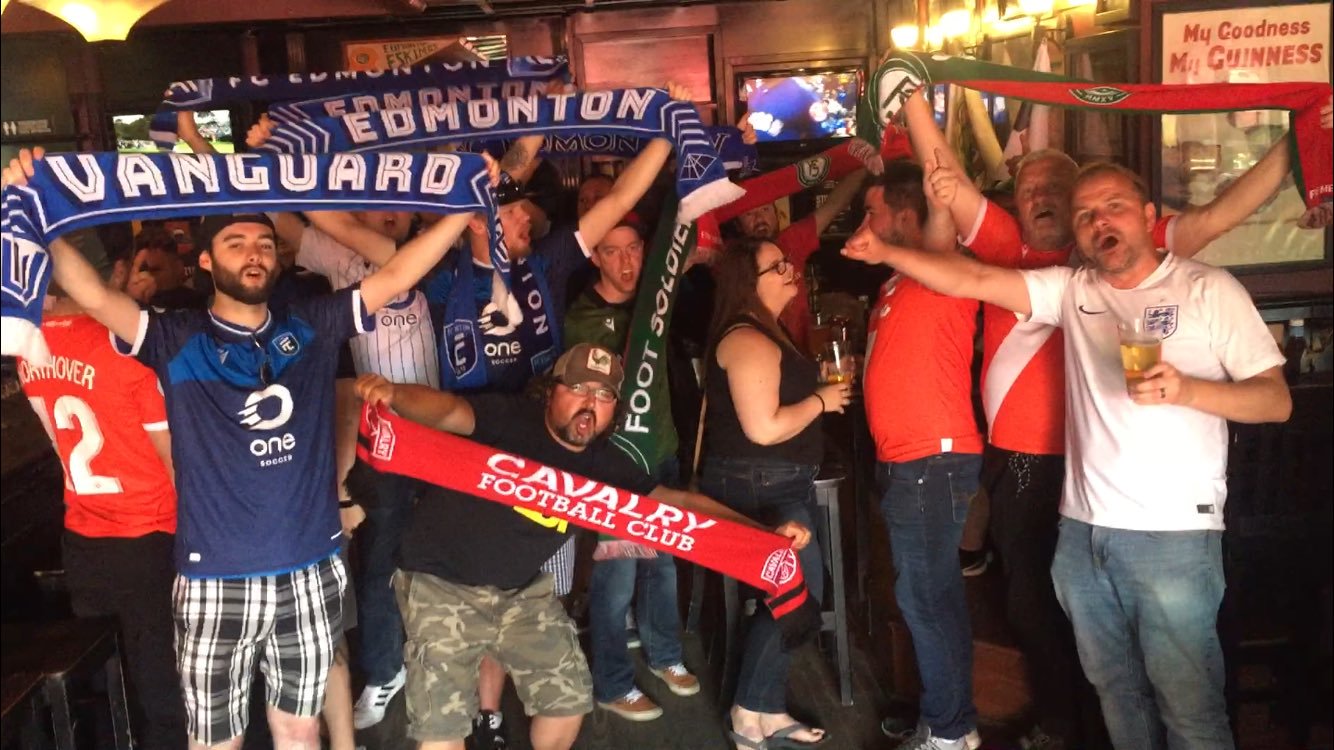 Al Classico and the Wildrose Cup can be traced back to a sketchy night at an Edmonton bar, and better understood with a second pub encounter in Calgary.

Supporters from Cavalry FC and FC Edmonton will award the first all-Alberta trophy to Cavalry this Saturday on the final day of the CPL season. The Cavs secured the inaugural Wildrose Cup on Sept. 11 with a 1-0 win over the Eddies at Clarke Stadium, which meant their 3-0-1 season record against FCE was insurmountable.

But before there was a trophy to compete for, a league to play in or even teams to compete, there was Sean Clarke and Dallas Walker. Members of the Calgary-based Foot Soldiers and Edmonton’s River Valley Vanguard supporter groups, the pair is set to award the Wildrose Cup for the first time this weekend – which brings us to the first bar war story.

All was well until some friendly chanting – which may have included a few choice words directed the Vancouver Whitecaps – sent both supporters groups out the door.

Kicked out. But kicked out together.

Two supporters groups put on their rear ends in the street, found a level of camaraderie that runs through Al Classico to this day.

“Dallas and I were reminiscing on it that the next year and thought, ’why don’t we pitch this as a regular thing’,” Clarke recalled.

‘Long before the CPL’

So, there was Dallas and Sean months later, looking to bring the Foothills and Eddies together again for another home-and-home series, just as they did in those under-the-radar friendlies the previous summer.

The two discussed that fun night in Edmonton, with Clarke harkening: “Hey, the first time we hung out we got kicked out of the same bar, so that’s quite a way to get things started.

“We wanted to build the game wherever we could,” Clarke said, referring to the Edmonton supporters in the same breath. “We thought maybe we could get something going to make people a little more invested … give us something a little more as supporters.

“We pitched it to the two groups, they loved it, then we went to then-FC Edmonton Academy Director Jeff (Paulus) and then-Foothills coach Tommy (Wheeldon Jr.) and they loved it.”

Unfortunately, their plan stuttered. Paulus was unable to commit his academy to a 2017 home-and-home, and when FC Edmonton took a year off of professional play, it looked even less likely.

But it got the ball rolling at just the right time.

Canadian Premier League clubs, including Cavalry FC and FC Edmonton, started arriving in 2018. With Paulus and Wheeldon Jr. set to command these new pro sides into the league in 2019, the supporters groups saw an opportunity to satisfy for a proper all-Alberta pro soccer prelude: a two-legged all-Alberta prospect matchup.

“It just started with two guys having beers in a bar and we were lucky to have two managers that were on side,” Clarke said.

A taste of what was then-jokingly and now, well, quite seriously called Al Classico came in Edmonton and Calgary.

“We had an unofficial idea of a home-and-away, make it low profile,” Walker admitted. “It really took off at the prospects game. We had 3,000 people at Clarke Stadium.

“It was becoming a bigger deal … we were surprised.”

‘We brought this cup in because bragging rights are not enough’

With that taste of Albertan professional soccer, and Cavalry FC and FC Edmonton firmly in place, both supporter groups came together last Fall.

Walker and Clarke, from either end of Highway 2, aptly brought the Foot Soldiers and River Valley Vanguard to Red Deer – dead in the middle between Alberta’s two major cities.

The pair had one thing in mind: a trophy. A piece of silverware that would bring Albertan top-level soccer together as a community, much like the Cascadia Cup had done in North America’s Pacific northwest.

The two groups decided to give the winner of the season series in the new Canadian Premier League a piece of hardware. Enter Al Classico’s shining symbol: the Wildrose Cup, named after the province’s official flower.

“Maybe it will be a more meaningful game, it will get more attention for years to come,” Walker theorized. “We brought this cup in because bragging rights are not enough.”

Money for the new trophy came easy for the two groups.

“We had a meeting in January where we held a little mini jug at the bar and said we need to raise $400 for the Wildrose Cup,” Clarke said.

The Foot Soldiers had the money in three minutes, even though five months still stood between them and the first proper Al Classico.

It’s only fitting we end with another bar story, staged on the eve before the Wildrose Cup and Al Classico were to come to life on May 18 in Calgary.

The scene is Kildares Pub, a stone’s throw away from Spruce Meadows, now known as a Cavalry supporters bar.

River Valley Vanguard had been invited by the pub’s owner after a visit there in 2018. They accepted the invitation on that dreary May afternoon, and unexpectedly walked into a sea of Cavalry red.

“Dallas might say they took over our bar,” Clarke offered.

Walker jokingly defends the infiltration: “The owner said we could come back here when the season kicks off and make it our bar … And right after that, they started advertising free bus transportation for Cavalry fans.

“It was all in good spirits, there was some fun banter here and there.”

Did they feel outnumbered?

“There were a lot more than five of us walking in there, so,” Walker said

‘We’re in this together’

Fitting that a small misunderstanding is the only bad blood between these two groups.

At times, you’d think they are cheering for the same club.

Take the scene from an Al Classico match in August, for example. Separated by a comically low fence, the two groups engage in what Cavalry FC coach Tommy Wheeldon Jr. referred to as “outrageous” activity from the two bitter rivals.

Tense moment from Friday’s #AlClassico when sets of opposing fans squared up against one another through the security fencing. A scene right out of 1980s England. Thankfully cooler heads prevailed. 😉@footsoldierssg @RVVanguard #Canpl #cavsfc @tommywheeldonjr @jeff_paulus https://t.co/PGChusdUsA

It’s even more fitting that Walker and Clarke – in contrasting red and blue like above – will present the Wildrose Cup to Cavalry FC on the final matchday of the CPL season on Saturday (4:00 p.m. ET/2:00 p.m. MT, available on OneSoccer & CBC).

“It’s friendly right now, I know that might not be the case forever,” said Clarke, just as he launched into a tongue-in-cheek diss of the Eddies in Year 1.

“It will go down in history that FC Edmonton didn’t stand a chance that first year. Cavalry were the better team and I hope that stays that way.”

The Eddies will be looking for their first win against their Alberta rivals Saturday.

Win or lose, Walker sees the Wildrose Cup’s awarding as a success, a blaze trailed for other Canadian supporters groups to find ways to co-operate.

“We’re going to use the Wildrose Cup as a symbol that the work both groups put in and the relationship we share,” Walker said.

“Even though we are supporting other groups, we can work together and help each other out.”

“We’re all in it together, we are going to help each other out and make it more entertaining and create the best possible rivalries.”