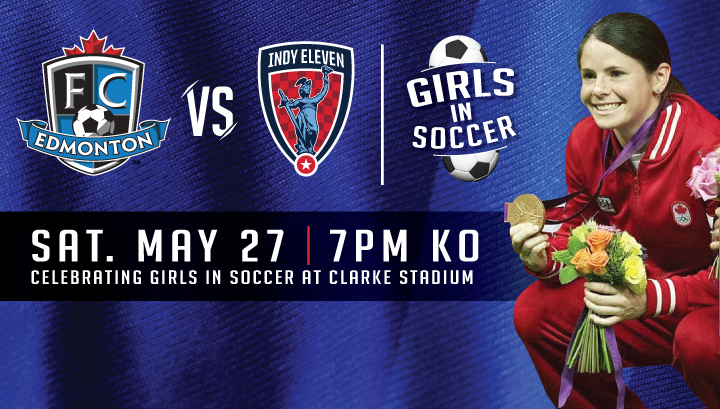 Canadian Women’s National Team midfielder and two-time Olympic bronze medallist Diana Matheson is joining FC Edmonton this weekend, May 26-27, as part of ‘Girls in Soccer’ Night at Clarke Stadium on Saturday, May 27 when the Eddies host the Indy Eleven at 7:00 PM MT.

Matheson, who plays her club soccer with Seattle Reign FC in the National Women’s Soccer League (NWSL), has 169 caps for Canada at the international level and scored the game-winning goal in the bronze medal match at the London 2012 Summer Olympics against France to clinch Canada its first team medal in a traditional sport since 1936.

“Grassroots advocacy is a key element to FC Edmonton’s community engagement strategy this year” said Jay Ball, FC Edmonton General Manager. “Bringing a Canadian soccer icon like Matheson to Edmonton, helps grow the game by inspiring more girls to register for minor soccer, which is what our community needs at all levels of play.”

In addition to making an appearance at Saturday’s match, Matheson will take part in a number of different events designed to inspire girls in soccer over the course of two days in Edmonton, where 40% of Alberta’s registered girls’ soccer players reside. In 2016, 40% of registered players in Alberta were female.

“Having Diana Matheson at the Girls in Soccer event will give many young players the chance to meet a hero,” said Richard Adams, Alberta Soccer Executive Director, “And meeting such an inspiring player will help motivate more girls to aspire to soccer stardom.”

Fans can come and meet Diana at the match this Saturday, May 27 at 7:00 PM MT at Clarke Stadium! Tickets for the match are available at tickets.fcedmonton.com.