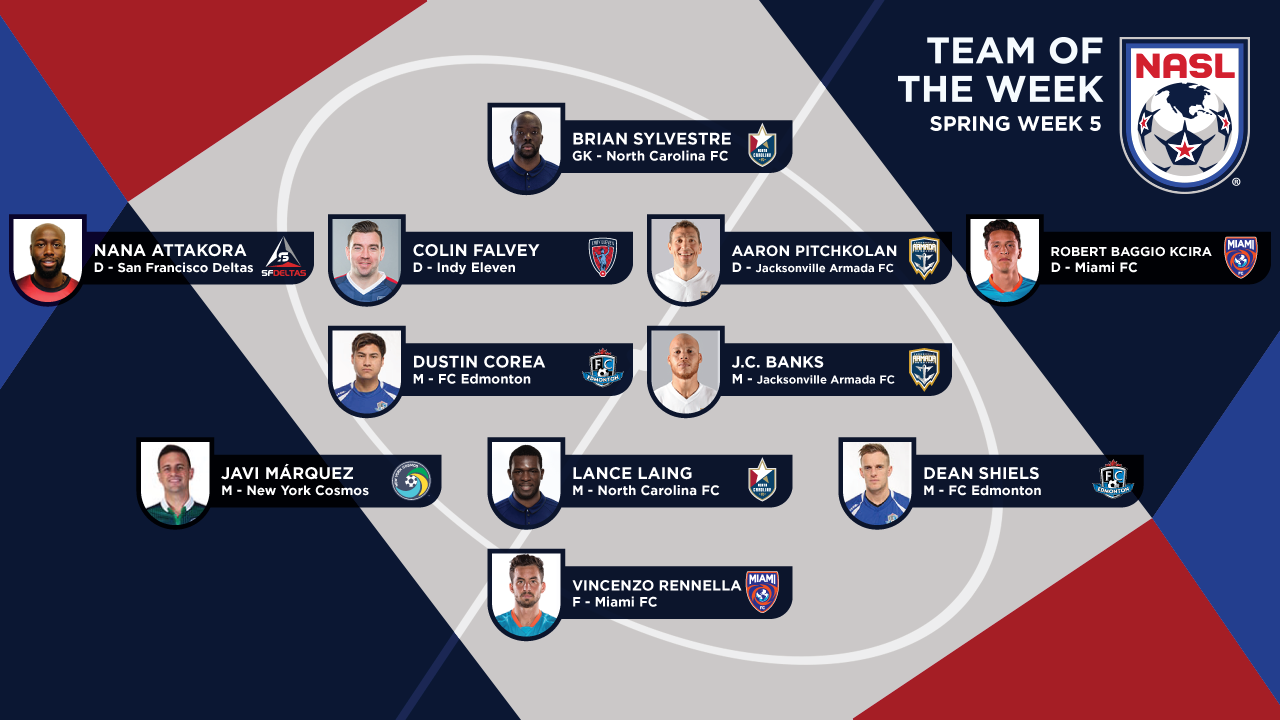 Corea scored his first goal of the season in fantastic style this past Saturday at Clarke Stadium, receiving a pass from Canadian international Ben Fisk from 25 yards out before turning and firing a beautiful left-footed shot to the top corner past a flatfooted Trevor Spangenberg for the 1-0 lead. No less than 10 minutes later, Shiels took a free-kick from just inside Puerto Rico’s half that went past everyone in the box and into the bottom right corner of the net to seal FC Edmonton’s first three points of the season. The Northern Ireland product had two chances, completed 42 of his 49 passes, and won five of his seven duels in the victory.

Read below to see the full NASL Team of the Week for Week 5:

DEF: Nana Attakora (San Francisco Deltas) – The Canadian international helped the Deltas earn a point in the 0-0 draw against Indy Eleven. Attakora made seven clearances and won both of his tackles and two duels in the contest. He also made two interceptions.

DEF: Colin Falvey (Indy Eleven) – Indy’s captain stood up to the task of battling forward Tom Heinemann and made four clearances. He also won all three of his duels in helping keep a shutout for Indy.

DEF: Aaron Pitchkolan (Jacksonville Armada FC) – The veteran’s strong play continued in the 1-1 draw with the New York Cosmos. He made 13 clearances and won six of his seven duels. He also made two interceptions in the match.

DEF: Robert Baggio Kcira (Miami FC) – The young defender scored the game-tying goal in the 95 th minute to earn Miami a point. He also won eight of his 10 duels and all three of his tackle attempts.

MID: J.C. Banks (Jacksonville Armada FC) – He scored the game-tying goal for Jacksonville, which kept the club unbeaten and in first in the Spring Season Standings.

MID: Javi Márquez (New York Cosmos) – The veteran midfielder found the back of the net in the draw with Jacksonville and also created one chance.

MID: Lance Laing (North Carolina FC) – The Jamaican international fired home a Tiyi Shipalane cross at the back post, which helped North Carolina earn a point on the road.

MID: Dean Shiels (FC Edmonton) – He scored FC Edmonton’s second goal, which ended up as the game winner and had a strong all-around match. He created two chances, completed 42 of his 49 passes, and won five of his seven duels.

FWD: Vincenzo Rennella (Miami FC) – He was active all game long, testing North Carolina shot-stopper Brian Sylvestre with three shots on target and creating two chances. One of those chances was the assist on the tying goal when Robert Baggio Kcira found the back of the net.