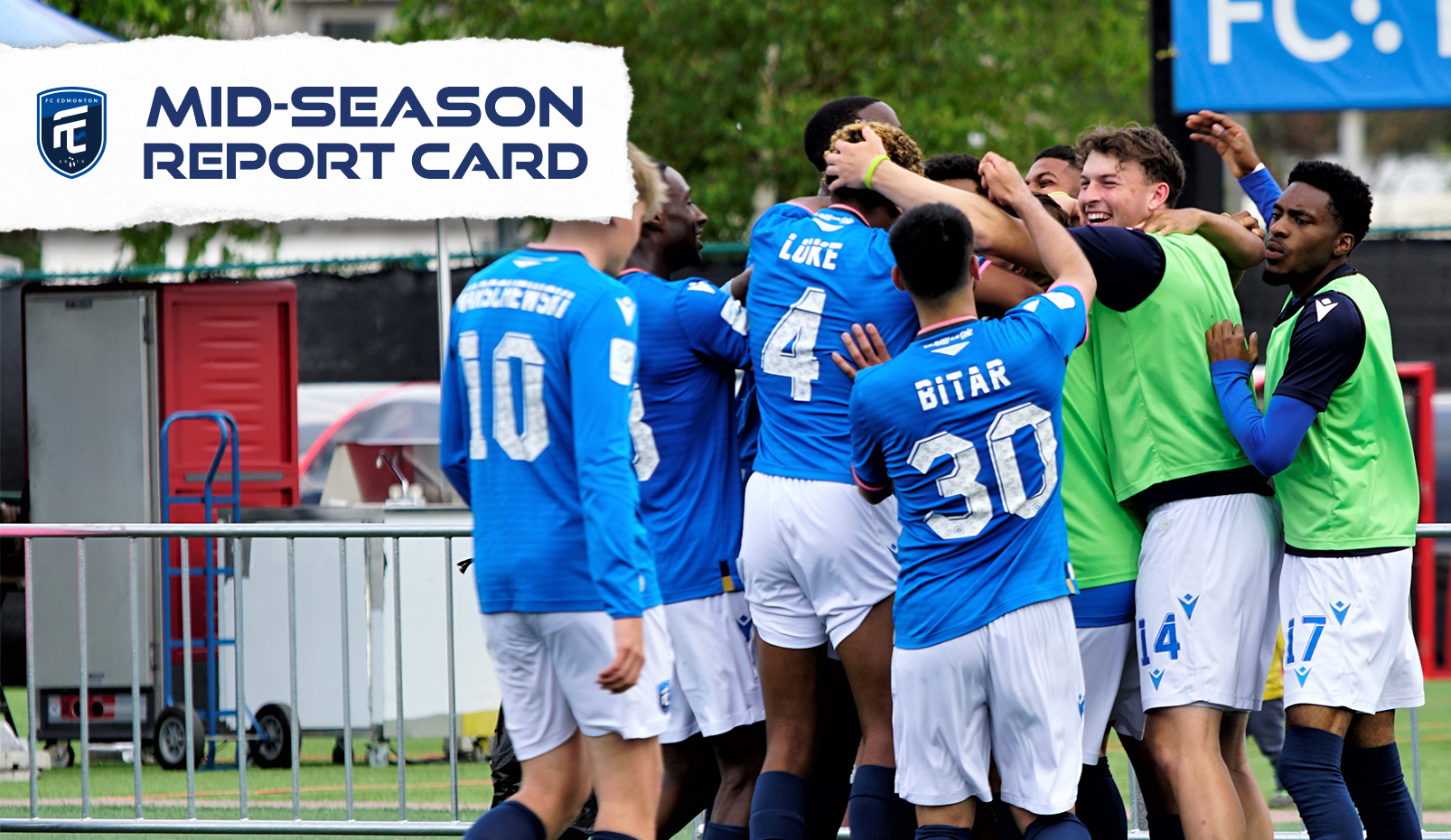 As the Canadian Premier League’s 2022 season reaches the midway point for most teams, the faculty at CanPL.ca have seen fit to evaluate each club’s first half of the campaign. All five panelists have assigned a letter grade to every side for their body of work so far, with some advice and areas for improvement for the remaining half of the year as well.

Two report cards will be released per day over the course of this week. Up next: FC Edmonton.

To see report cards for other clubs, click here.

Alexandre Gangué-Ruzic: It hasn’t been an easy season for Edmonton, who have seen a lot of movement at the club, leading to a nightmare start that saw them go winless in their first 11 games. But despite that, Alan Koch’s side has slowly been building each game, really setting a foundation — one that has paid off recently, having won two of their last four games. Through the solid contributions of Andreas Vaikla, Nyal Higgins, Bicou Bissainthe, Shamit Shome, Gabriel Bitar, Wesley Timoteo, Mamadi Camara and Tobias Warschewski, a tidy core of players has been built, one that can trouble teams on most nights at both ends. In a year of learning, that’s key, softening Edmonton’s report card.

Benedict Rhodes: This year was always going to be a tough one for Alan Koch’s side, and that’s exactly how it’s panned out. Despite the difficult circumstances around the team’s ownership, Koch has built a hard-working group of players that have something to prove, and have already picked up a pair of big wins. There weren’t any expectations coming into the season, and their “FC Opportunity” story is an inspiring one.

Charlie O’Connor-Clarke: “Turbulent” doesn’t even begin to describe what the 2021-22 off-season was like for Alan Koch and the Eddies, having been forced to spend most of preseason evaluating trialists rather than preparing tactics with a fully-established squad. As one might expect of a team with so many first-time professionals, results have been hard to come by this year, but an impressive tenacity in this side has produced some memorably positive moments — from Tobi Warschewski’s ridiculous bicycle-kick equalizer in the first game of the season, to recent victories over Atlético Ottawa and York United. There’s been growth and reason for hope in Edmonton, though it’s undoubtedly been a difficult season so far.

Kristian Jack: Following a winter of change, expectations were low for this team in 2022, but the team that has been put together have responded well to make themselves competitive and fun to watch for their supporters. Two 3-0 losses, to standouts Cavalry and Forge, are the only games where they have struggled, and throughout their trials and tribulations of a club a spirit has been born and flourished that serves them well when it comes to working hard and being difficult to beat. In their last six matches they have played six different teams and have an even goal difference (9 scored, 9 conceded) and opened the scoring in four of those six games, led by the brilliant Gabriel Bitar who has been a shining light in what could have been a dark and depressing season.

Mitchell Tierney: To be fair to FC Edmonton, the rubric for them probably looks a little different from any other team in the league. They have shown significant progress in recent weeks and have now scored in nine straight matches. With that being said, it also took them eleven matches to pick up their first win this year and have conceded more goals than any other team in the league.

Alexandre Gangué-Ruzic: Now, the goal is simple for Edmonton: win as many games as possible, and push to not finish last. They’re right on York’s heels, so why not continue that push, one that really got credence when they beat them 3-0 on July 1st. It’s not going to be easy, as they will play a lot of their games on the road, where they’re yet to win, but if they keep playing as they have been as of late, they’ll change that. Don’t be fooled by the expected goals or actual goals charts, which remain brutal to them after their start. They’ve become a solid unit, one that could disrupt some teams’ pushes up the standings, all while playing some pretty fun soccer.

Benedict Rhodes: Expect more of the same from FC Edmonton. They’ll continue to be a team that enters every match as the underdogs, and tries harder than their opponents to get a result. They keep improving as they grow into the season, so a few more wins aren’t out of the question either, especially at home in front of their growing crowds.

Charlie O’Connor-Clarke: As others have mentioned, expect the Eddies to continue to be one of the hardest-working sides in the league. The back half of the season is perhaps even more difficult than the front, with nine of their last 13 games away from home, but the most important thing for this side will be to continue demonstrating the competitive spirit it has done over the first few months. Every player on this team is playing to prove they belong in the professional game and deserve another CPL contract, which can produce a hungry group of men desperate to perform well. Edmonton’s recent acquisition of Mamadou Kane on loan from York United could also be a boost to both parties, with Kane needing consistent minutes and the Eddies needing additional attacking depth.

Kristian Jack: An inevitable slide will come with eight of their next nine games on the road. The key for them will be to continue to understand their identity, where a back three has really worked for them at times, and not lose momentum or confidence as results turn. We often look at teams collectively to see what they can do but in this unique profile of a club we are all better served to see which players can now develop into regular Canadian Premier League players going forward, regardless of what team they will be on. There is a lot on the line for this group in the second half of 2022 and although outcomes remain important the scores of their games will not always define what they are as individuals at this level.

Mitchell Tierney: Things have certainly been looking up for the Eddies in recent weeks. All signs point to the fact that they are going to be a much more difficult opponent during the second half of the season than they were in the first. Some standout performers of late are worth keeping an eye on as well, as Gabriel Bitar, Wes Timoteo, Andreas Vaikla and Mamadi Camara in particular have been among the league’s best so far this year.