EDMONTON — FC Edmonton may be underdogs this year, but they’re proving to have quite a bite.
The Eddies battled the defending Canadian Premier League champions, Pacific FC to a 0-0 draw, Wednesday night at Clarke Stadium.
It was a strong bounce back effort for FC Edmonton, who controlled the play for strong portions of the match, and despite not scoring a goal, looked dangerous offensively.

“We just went toe-to-toe with the champions who are undefeated, and could have won the game,” said FC Edmonton head coach Alan Koch.
“I think for who we are and where we’ve come from, that’s a massive achievement.
“We’re not going to go out and go crazy and celebrate tonight, but that is a little bit of a morale victory for us; to put in a performance like that and get a clean sheet.”

Pacific FC is loaded with talent and experience, but that didn’t stop the Eddies to push back and show that they can hang with the defending CPL champs. Defensively, they made it tough on Pacific FC to get any big opportunities from inside the box, and they attacked with speed, which gave the Eddies plenty of solid scoring chances, they just couldn’t finish.

One of their best scoring opportunities came in the first half off the foot of Mamadi Camara, who raced up the right side of the pitch, made a nice move inside and got his shot off, but goalkeeper Callum Irving got his fingertips on the ball to just steer it wide of the post.
The Eddies are a young group, and are still trying to find their way offensively, but the chemistry is starting to build amongst the team.

“These things are going to take time, it takes time to build chemistry and to know what people are like on the field,” said Camara, who was making his first career start at midfield for the Eddies.
“I think the game that we play is just going to keep getting better and better.
“We came in with a game plan and we executed. The first half was a little bit difficult, they had a lot of possession and were threatening us, but I feel like the second half was more 50-50 and it could’ve gone either way.

“We’ll take the point, but we’re still fighting and trying to get that first win.”

The Eddies continued to press for a goal as the first half closed. Defender Luke Singh walked through to the top of the box, but his powerful shot just missed the top corner.
Pacific had their share of opportunities, led by forward Marco Bustos.
The dynamic striker’s best chance came in the 43rd minute as Bustos broke in behind the Eddies defenders, and got a shot off, but Eddies goalkeeper Andreas Vaikla came out to challenge and made the big stop.

“Our goal was to get a clean sheet and we achieved that, against a team that was well-oiled and have played together for some time,” said Koch.
“They have some of the best and highest paid players on their team. So, we’re not exactly competing on a level field.
“So, for us to come in and weather the storm and for us and Andreas to get a clean sheet, I think it’s a big, big positive for us.”

The chances continued for the Eddies in the second half. Midfielder Wesley Timoteo jumped on a turnover by the Pacific defender, but he couldn’t get around Irving to tuck the ball into the wide-open net.
In the 67th minute, midfielder Gabriel Bitar weaved his way through a couple defenders and let an absolute rocket go, but Irving leaped into the air to tip the ball over the crossbar.

“Our group is new and we’re hopefully going to get better and better as the season goes along,” said Koch.
“The teams that we’re playing against know how to play together. We don’t, we’re still trying to figure out how exactly to come together and what we can do.”

NEXT UP: The busy week continues for the Eddies. They travel to Halifax on Thursday afternoon, to take on the Halifax Wanderers FC on Saturday at Noon MT. 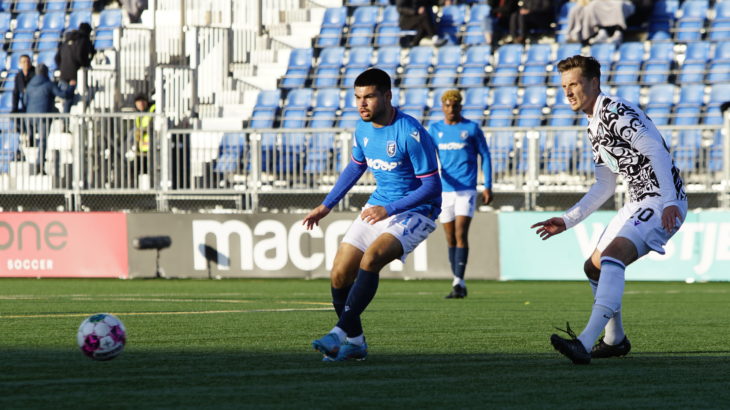