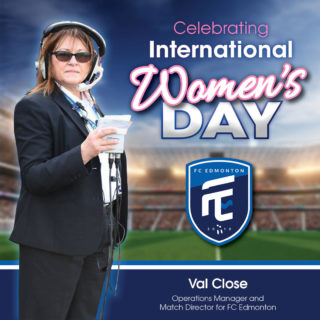 Val Close has been with FC Edmonton since 2009, serving as the Operations Manager & Match Director. Her knowledge and passion for the game and the industry is unparalleled. Val is responsible for presenting the game based on league and team guidelines – including supervision of all stadium set up and take down, parking standards, accreditation distribution, preparation of match day timing sheets, working with youth volunteers (flag bearers, ball retrievers, player escorts), emergency medical personnel, broadcast personnel, PA announcer, anthem singers, and serving as the chief liaison for the match officials and the visiting team. She also submits post-match reports, oversees service and vendor contracts, and SO MUCH MORE!

Val’s impressive career also includes volunteering on various boards including with the Alberta Soccer Association, serving as the Executive Director of St. Albert Soccer Association, the Protocol Chair for the U19 Women’s World Cup 2020, serving as chair of Soccer for the World Masters Game in 2005, the General Manager position for the U20 Men’s World Cup in 2007, and she was appointed to be Alberta’s representative to the Canadian Soccer Associations Development of Women in Soccer in 2012, She even formed a committee in Alberta – looking at barriers that keep women from deeper involvement in soccer that still thrives today and is a vital part of Alberta Soccer’s development of Women in soccer! Additionally, in 2014 Val accepted a short-term contract with the FIFA U20 Women’s World Cup, and also worked with the FIFA Women’s World Cup in 2015.

What does Val say is the highlight of her career, so far? In 2019 she was hired by an independent promoter to go to Los Angeles and manage a match between Argentina and Chile!

“The world of professional football (soccer) has traditionally been thought of as a man’s world. But the opportunities that are opening up in the sport to women are encouraging. But it has not always been easy.”

“Women are often easily dismissed and ignored, and it takes a certain amount of tact and – for lack of a better word – assertiveness to make yourself heard… assertiveness that a man would never have to exert to get his point across. But it is worth it! I have at times ‘quit’ soccer and gone to work at other careers, but the lure and excitement of the game keeps drawing me back!”

“It is amazing what you can accomplish if you do not care who gets the credit.”
– Harry S Truman

We are so lucky to have Val, and today we celebrate her on International Women’s Day.