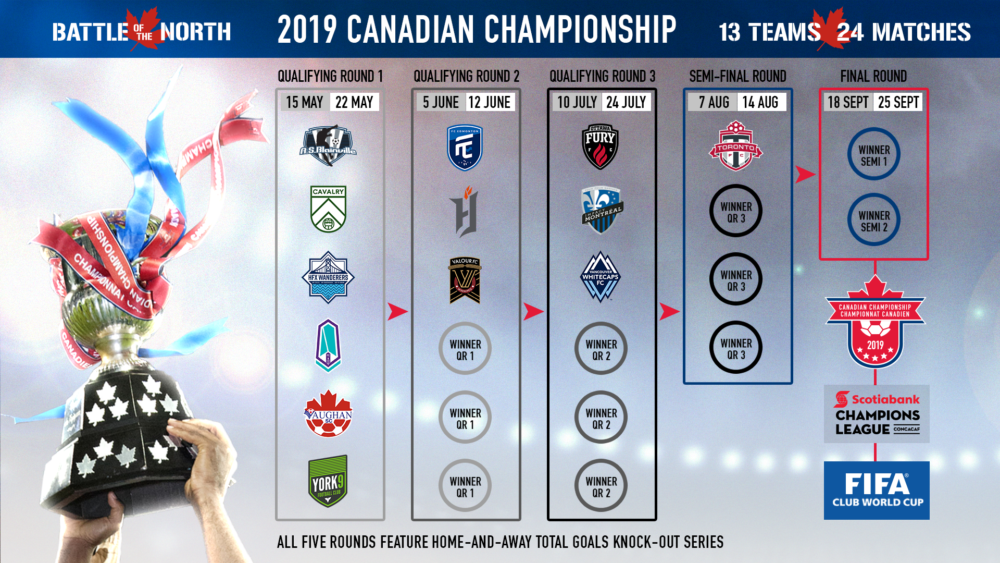 EDMONTON, AB – Canada Soccer announced Thursday the format for the 2019 Canadian Championship, as the tournament expands to 13 teams and 24 matches. The schedule features Canadian teams from across five leagues culminating with the Final Round on September 18th and 25th.

“The Canadian Championship has evolved into a true domestic cup competition with multiple levels of entrants all battling to secure a coveted Scotiabank Concacaf Champions League spot,” said Canada Soccer President Steven Reed. “We are proud to welcome seven teams as first-time entrants from League1 Ontario and the Canadian Premier League that join six returning teams in our 2019 Battle of the North.”

All 13 teams have been assigned a round in which they will enter the competition, with the 2019 Canadian Championship round-by-round match ups to be announced at a later date.

The First Qualifying Round will be played on May 15th and 22nd, featuring six teams drawn to determine the matchups. PLSQ winners AS Blainville and League1 Ontario winners Vaughan Azzurri will not be drawn against each other. The four Canadian Premier League teams that entered into Canada Soccer membership in 2018, Pacific FC, Cavalry FC, York9 FC and HFX Wanderers FC will join them in the First Qualifying Round. Only AS Blainville are returning to the competition while the other five teams are all making their Canadian Championship debut.

FC Edmonton will join the fray in the Second Qualifying Round, alongside Valour FC and Forge FC, which will take place on June 5th and 12th. Each club will be matched up against one of the winners of the First Qualifying Round.

Of course, FC Edmonton is no stranger to the Canadian Championship, having taken part in the tournament from 2011 through 2017, including Qualifying Round wins over Ottawa Fury FC in 2014 and 2015.

“For me, the Voyageurs Cup will always be special and we have certainly enjoyed some memorable moments and infamous decisions,” said FC Edmonton Head Coach and Director of Soccer Operations Jeff Paulus. “This competition, like the game itself, belongs to the supporters and it is a competition that FC Edmonton will take very seriously and commit itself to.”

“I truly believe we owe it to the Voyageurs themselves, and the fans who support our game in this country to honour the competition and do everything we can to try to win it.”

The Semi-Final Round (August 7th and 14th) will feature three Third Qualifying Round winners plus Toronto FC, who receive a bye to this round as the defending Canadian Championship winners. The two Semi-final winners will then advance to the Final Round which will be contested in a home-and-away series on September 18th and 25th.

FC Edmonton is a proud member of the Canadian Premier League, kicking off in April of 2019. Your season ticket package includes the first home match of the 2019 Canadian Championship! For season ticket information, head to our website – https://fcedmonton.canpl.ca/tickets/