EDMONTON — Rivalries are always more intense, and FC Edmonton learned a hard lesson against their bitter rivals, Cavalry FC.
The Eddies were on their heels for the majority of the first half, and Cavalry FC earned a convincing 3-0 victory in the first installment of the Al Classico, Friday night at Clarke Stadium.

Joe Mason and Ali Musse scored for Cavalry in the win, and they were awarded an own goal late in the second half to round out the scoring. It marked the first loss at home for FC Edmonton, as they drop to 0-3-3 on the year as they continue to search for their first win of the season.

“Cavalry deserved to win the game; throughout the course of 90 minutes, they were the better team,” said FC Edmonton head coach Alan Koch.
“I think they came out with more intensity than we did and in a (local) derby, as young as we are, you have to come out with that intensity, you have to be ready to play from that first minute to that last minute.
“I was pleased with our response in the second half, we challenge the guys a little bit at halftime, but that obviously doesn’t impact the result tonight.”

Cavalry FC took control of the first half and used their experience to put pressure on the young Eddies squad.
They took a 1-0 lead in the 30th minute, when Mason slipped in behind coverage and ripped a shot off the crossbar and in.
Just four minutes later, Musse’s free kick picked the corner as Eddies goalkeeper Andreas Vaikla had no chance on either goal.
Vaikla, who has started in all six matches for FC Edmonton this season, was solid once again as Cavalry had 13 shots, seven of which were on target.

“To be honest, it might have been a little bit naivety. Our guys are young, and a lot of them don’t know what it’s like to play in a game like this. Cavalry has experience all over the place,” said Koch.

The Eddies looked much better in the second half, as they started to get more offensive opportunities on Cavalry FC goalkeeper Marco Carducci, but despite the pressure, they couldn’t generate a shot on net.
In the 57th minute, Kairo Coore had a great chance in the penalty area as he turned away from his defender, but his shot went wide.
Nyal Higgins had a good opportunity in the 65th minute as he got himself in a good position off a corner kick, but his header just went high over the net.

“In the second half, we picked it up and tried to get back into the game,” said Higgins.
“A lot of guys had some good opportunities and we were defending well. When you’re down in the second half, you always have to play with pride and keep pushing forward and try and give it a better effort for everybody.”

The Eddies have had to face several challenges in the early stages of this season, and they’ve learned some tough lessons along the way, and the loss against Cavalry FC is another one they can learn from.

“We’re a young team, and mistakes are going to happen, but we have to remain positive and learn from this,” said Vaikla.
“We need to lock in and be ready right from the start.”

SHOME RETURNED: Captain Shamit Shome returned to the Eddies lineup and came off the bench in the loss against Cavalry. Shome missed the last three games due to injury.
CAMARA OUT EARLY: Midfielder Mamadi Camara was injured in the 13th minute and was forced to leave the game in the 17th minute. He was replaced by midfielder Simon Triantafillou.
NEXT UP: FC Edmonton travels to Calgary to face Cavalry FC once again in the first round of the Canadian Championship. 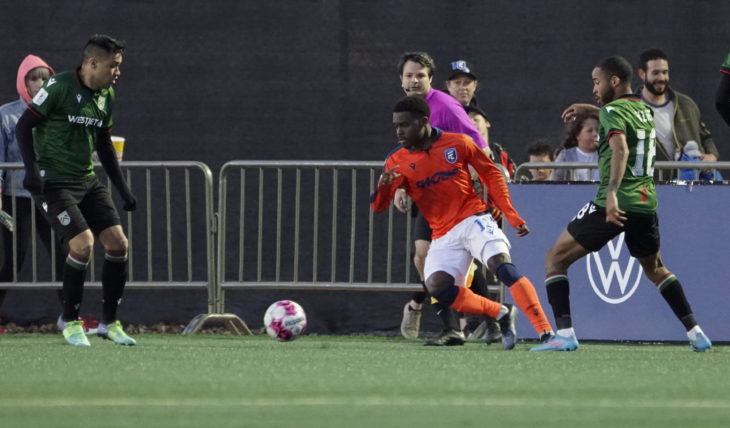