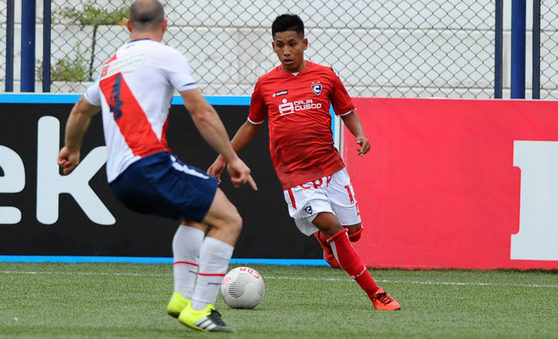 Peruvian winger Raúl Tito will be back with FC Edmonton in 2021… so to speak.

The 23-year-old, who was stranded in Peru and unable to join the club for the 2020 Canadian Premier League season due to COVID-19-related travel restrictions, re-signed with the Eddies for the 2021 campaign on Friday.

Tito spent much of 2020 on loan to Peruvian second division side Santos Nasca, where he scored once in eight appearances. The Peruvian promises to bring attacking flair up either wing for FCE, and can use his pace to beat opposing defenders.

“Thankfully, he has been able to play matches back in Peru this season, and we look forward to welcoming him to Edmonton,” FCE coach Alan Koch said in a media release. “His dynamic ability and attacking creativeness will give us an additional tool in 2021.”

Tito garnered attention from the Eddies after a two-goal, two-assist season in Peru’s second division for Cienciano in 2019, helping the Cusco-based club to earn promotion to Peru’s Liga 1. Tito’s professional debut came in 2014 with Sport Boys, where he played as an academy player since 2010.

Tito played in Liga 1 prior to 2019 with various clubs, including an original stint at Cienciano in 2015, plus time with Universitario, Cusco FC, and Sport Rosario.

The young winger has played two games in the Copa Sudamericana — South America’s second-most prestigious club competition, behind the Copa Libertadores — and he’s represented Peru internationally at the under-20 level.