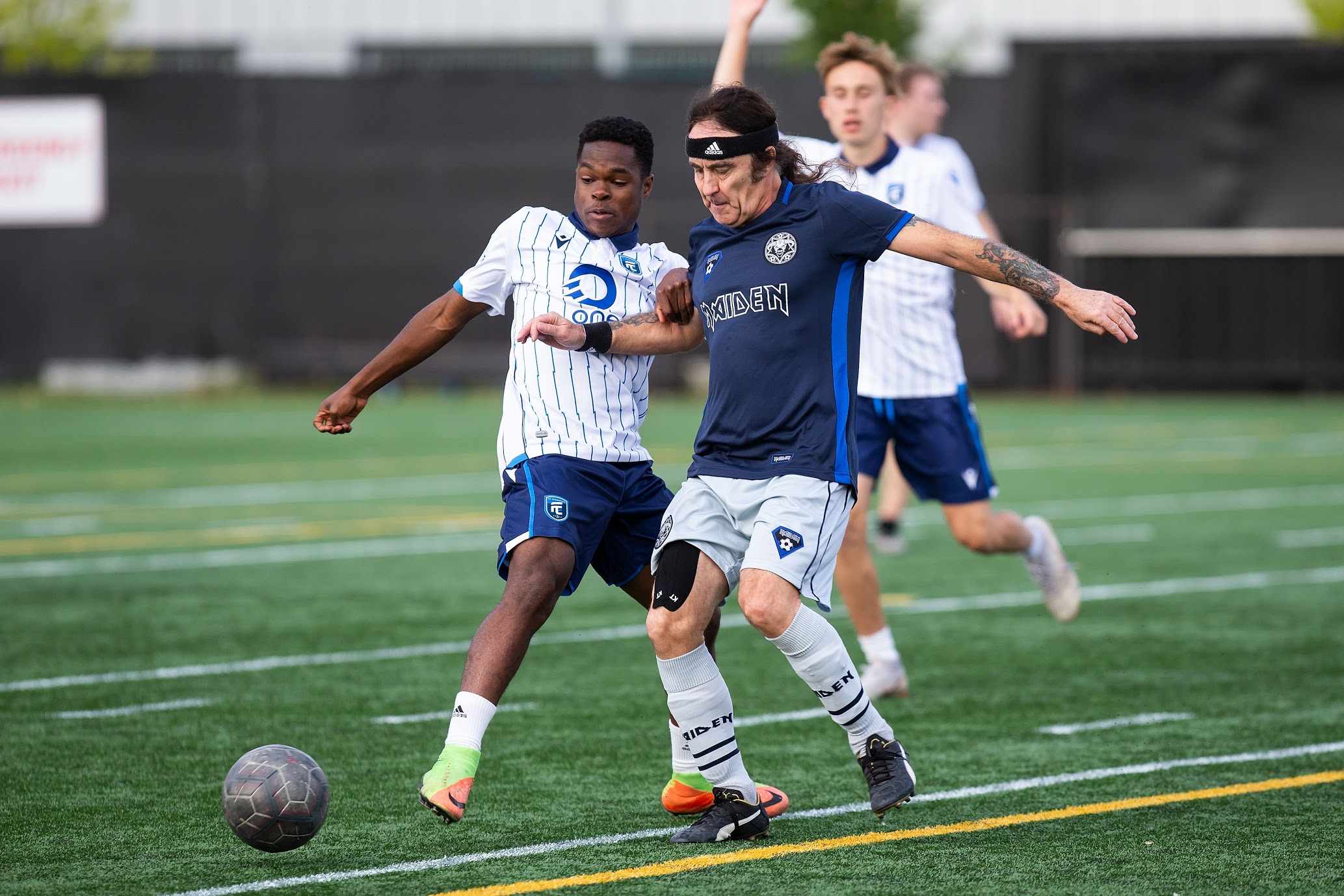 “These guys you’re playing against, they’re 65 years old. They’ve done years of booze and partying. You can’t lose to them,” Paulus told his players.

He wasn’t talking to his FCE team, rather a group of media and supporters who donned Eddies’ kits Thursday night to play… Iron Maiden?

Yup, maybe the most famous name in metal music. The band plays at Rogers Place on Friday night. And the band and its road crew are well known to spend their off days on tour playing football. So, with a Thursday off in Edmonton, the band’s management contacted FC Edmonton to set up a match.

If there ever was one band that was destined to be associated with FC Edmonton, it had to be Iron Maiden. After all, throughout the Iron Maiden’s four decades of touring the world, “Eddie,” the band’s monstrous mascot, has been a constant. Eddie has graced t-shirts and album covers. His patch has been sewn onto denim jackets and scrawled in high-school yearbooks.

With FC Edmonton, here you have a team that has been lovingly nicknamed the Eddies since 2010. Their fans have used Eddie’s gruesome visage and lyrics from Maiden’s classic, “Run To The Hills” on their banners.

Eddie versus the Eddies.

“Oh well, we get to kick the s–t out of Eddie, then,” Iron Maiden bassist Steve Harris laughed before the game. “It’s normally the other way around. But it will be good fun.”

Harris is no doubt the team’s leader, economic in his movements like an English Andrea Pirlo, but with a solid left foot that tested FCE ‘keeper Lars Hirschfeld in the first half. Yup, the long-time national team goalkeeper and FCE goalkeeping coach was between the sticks for the home side in the first half.

Maiden scored three goals through the first 45 minutes, but we’ll blame the porous back line.

The club also invited four long-time supporters to Clarke Stadium, but didn’t exactly tell them the truth. Club general manager Jay Ball instructed them that they had to come down in their gear so they could be part of a promotional video. They were put into a separate dressing room and then led onto the pitch, blindfolded. They were speechless when the blindfolds came off.

And, how did he feel when the blindfold came off?

“I couldn’t even speak. I was completely in shock,” Gluecks admitted.

In the end, Iron Maiden, with the addition of a few FCE Academy players, won 7-3. It was a result that had Paulus shaking his head after the final whistle.

“Maybe the most embarrassing result on this field this year,” he said, trying to hold back a smile.

Well, at least the home team, to quote one of Iron Maiden’s songs, “died with their boots on.”