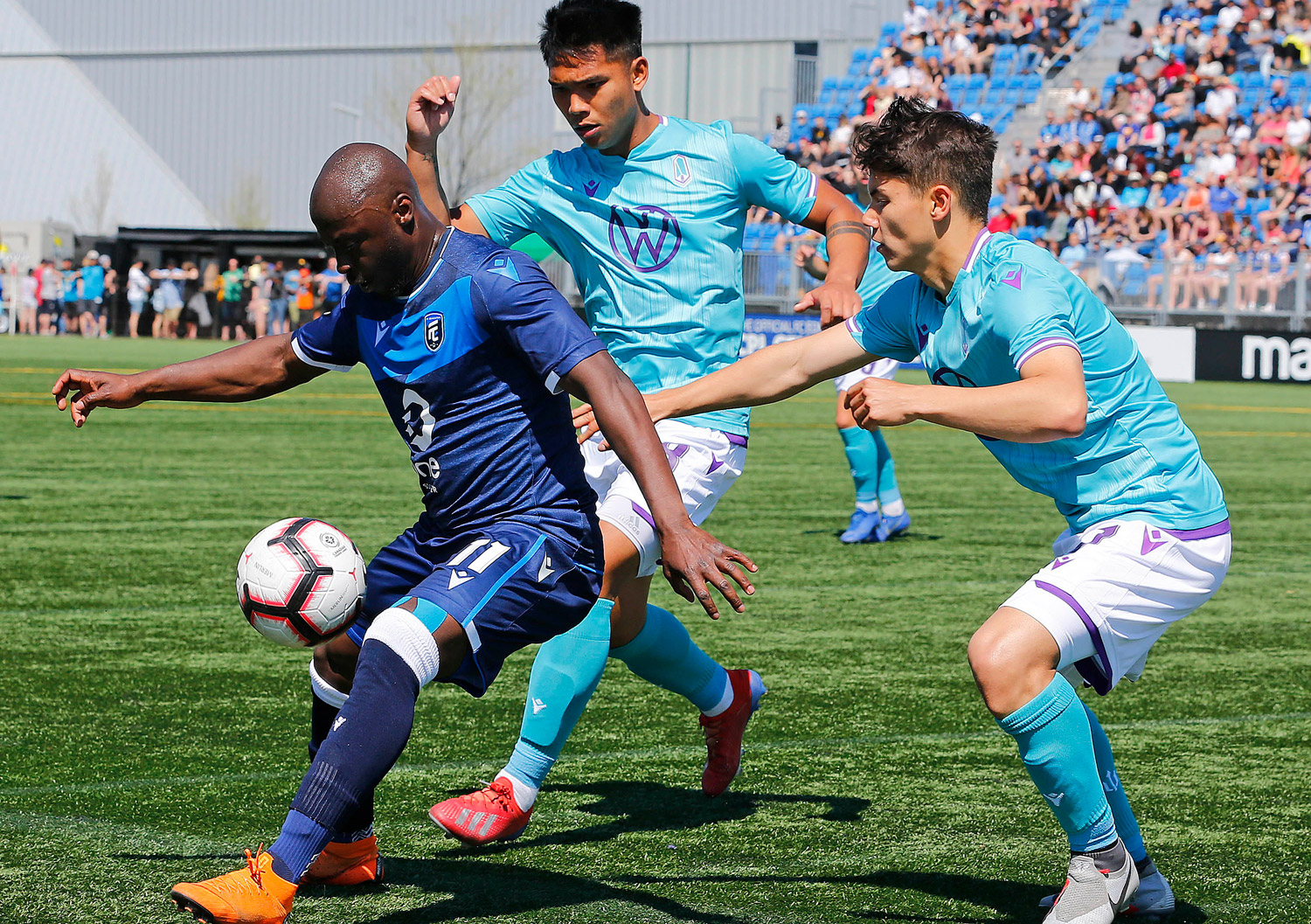 FC Edmonton have been good at home this season and the Eddies will be hoping to end a four-game home stretch with a win versus Pacific FC on Saturday, 4 pm at Clarke Stadium. Get your tickets HERE

The last three matches have seen Edmonton collect five points from a possible nine. The first two matches ended in a draw against Valour FC and Forge FC after both matches were delayed due to poor weather conditions.

“I am disappointed because I feel like we dropped four points to Valour and Forge on this pitch,” Head Coach Jeff Paulus said. “Both of those I thought we should have won, but that’s football. There have been games were we shouldn’t have won and we won.”

Edmonton registered a convincing 2-0 win against HFX Wanderers in their last outing at Clarke Stadium. The team dominated possession for large parts of the game and were helped over the line by goals from Easton Ongaro and Tomi Ameobi.

Now, focus shifts to Saturday when Pacific FC come to Clarke Stadium. The two teams have met twice this season, with the first game ending in a goalless draw and Clarke Stadium, and the second game ending 3-1 in favour of the Eddies at Westhills Stadium.

In the victory versus Pacific, Edmonton’s speed and strength proves too much for the Pacific backline who had a tough time against Oumar Diouck and Tomi Ameobi.

“When we went there, we were riding a good moment and we had started finding our groove again,” Paulus added. “We limited their chances, they had a wonderful long strike. But I thought it was a really professional away game. We were hard to break down, we countered well and we took our chances. We matched their energy because they are a young fit team, and we will have to do the same thing this Saturday.”

Paulus expects a different Pacific FC from the last time the two teams met in Victoria. Pacific were hit with a lot of injuries and many players had to play in unfamiliar positions, which benefitted Edmonton.

“It’ll be a different game for sure, they have healthy bodies back now,” Paulus added. “They have their big defender back; he will organize them at the back. They had a lot of players injured and playing out of position so you have to take that into account. Their organization is starting to settle in, they’re more organized now and that’s what happens when you have players playing in their natural position, and they’re only getting better under Michael Silberbauer. I think on their day they can beat anybody.”

Edmonton have been good at home, only losing twice at home in nine home matches in all competitions. In the last five home matches, the team has only conceded one goal and has scored six. Typically, Clarke has always been a hard place to come and play and this season has proved to be no different for opponents.

“The climate around the stadium makes it a bit tough because we haven’t really had a decent day this season,” Paulus stated. “You have win and cold rain here, which makes it tricky. You have to have pride to play at home, in front of your own fans, it gives you that extra energy you need.”

With a spot up for grabs in the final, competition at the top is really close. Edmonton, York and Forge are all in the mix to contend for the final spot. Meaning, collecting points at home is a must for any team trying for a spot in the final.

The Eddies biggest competition for the final spot in the championship will be against York9 and Forge. Edmonton plays York two more times at home, and Forge once more at home as well.

“This is vital, if we drop points at home then it is not good enough You fall further behind,” Paulus added. “Look at a team like Halifax, they’ve done very well at home and they’ve kept themselves alive in the race because of it. For Forge, if we can get the win against them here and set that statement where we went 3-1-1 against them then I think we are on our way. IF we take the 9 points from there, we have a chance to win this fall season.”

“We are good now, with York we are done playing there and they have to come here now. And they’re pushing for a spot as much as us. We have to beat them at home, the east coast teams don’t enjoy travelling out here. We have to take advantage of that.”

A win versus Pacific FC sets up a big clash in Calgary for Edmonton. Given that both Edmonton and Calgary wins this weekend, Edmonton will be two points behind the Spring Season winners.

“Cavalry are two points ahead with a game in hand,” Paulus noted. “We have the two draws now, a win earlier, and if we get another win here then things will be good. And you also start to build that confidence when you keep winning. Cavalry play on a Wednesday in the cup, then again on Friday against us. And a win [versus Pacific] will allow us to go there with our heads high, shoulders puffed out and that would be great.”