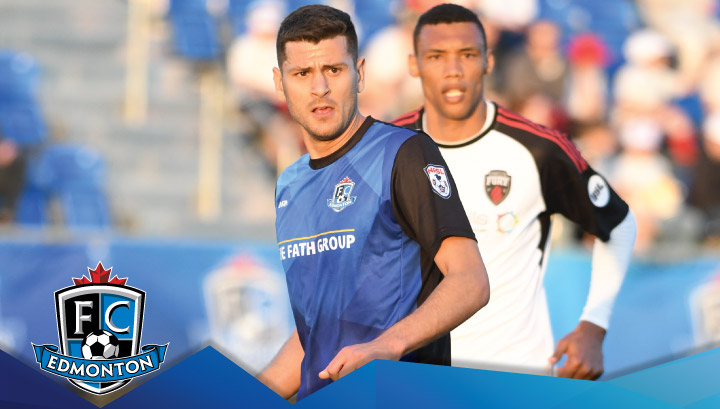 With six appearances off the bench so far to begin his FC Edmonton career, midfielder Sabri Khattab looks to build on his appearances in hopes of securing a regular spot in the Eddies’ starting eleven.

The 27-year-old midfielder made his FC Edmonton debut in the opening match of the North American Soccer League (NASL) against Jacksonville Armada FC, when he came on as a substitute in the second half. The Norwegian came off the bench in five more matches this season and is eager to start his first game as an Eddie, but knows it’s important to continue working on his game every day in order to seize the chance when it comes his way.

“I feel like I’ve gotten more minutes lately, so more time for me to do my thing on the pitch,” Khattab said.  “At first, I wasn’t getting a lot of minutes, so it was hard to change the game. But as the season progresses, I see my minutes increasing.

“For now, I just need to keep doing the things I’m good at and know I will get my chance eventually. When I do I have to make the most of it.”

Khattab moved to his hometown club of Kvik Halden FK in 2016 after four seasons with Bryne FK of the Norwegian second division, and is one of six players who signed with FC Edmonton this past offseason. The midfielder feels his experience as a professional will benefit the team, as he has gone through spells like this before when his team wasn’t finding the win column as much as they’d like.

“When I played in the second division in Norway, the level of play was fairly similar,” Khattab noted. “The only difference is there are only eight teams here, so every team is competitive and every match is really important because it’s almost a six-point game since the standings are so close. We need to score goals to win games, that’s the most important thing, not just for midfielders, but everyone else too. We all have to contribute. Right now, for us it’s a combination of us being unlucky and also not performing good enough.”

Khattab has settled into Edmonton after moving over the Winter, which can be a tough city to transition as most people aren’t used to the climate. But the midfielder notes similarities to Canada and Norway’s climate, and was recently joined by his wife and two kids who recently moved to Edmonton.

“It’s really nice to have my family with me now,” Khattab said. “It’s different when they’re here, in a good way. When you come home from training you can leave football behind and spend time with them. But I’m getting use to Edmonton now, the climate is fairly similar so it’s helped me a lot. In Norway its long, cold winters and nice summers much like Edmonton.”

FC Edmonton head coach Colin Miller believes Khattab has the ability to make a difference in the squad. Miller noted that Khattab picks up good positions in the final third and has the ability to find the back of the net — something he is looking for from his midfielders. However, Miller knows that players who come from abroad need time to settle into a new city and new squad before they find their feet on the pitch.

“Any player needs time to settle at a new club, whether it’s Barcelona or FC Edmonton,” Miller said. “Our training sessions are physically demanding and the competition is strong, so I think he needed time to settle in. It’s very critical our midfielders contribute with goals and he certainly can be one of those guys for us.

“He has the ability to hit the ball better than anyone on this team and he’s got a lovely touch around the goal. He’s usually very consistent around the goal, which is a gift. We have to continue to work on getting him the ball in those areas because he’s scored some great goals over his career.”