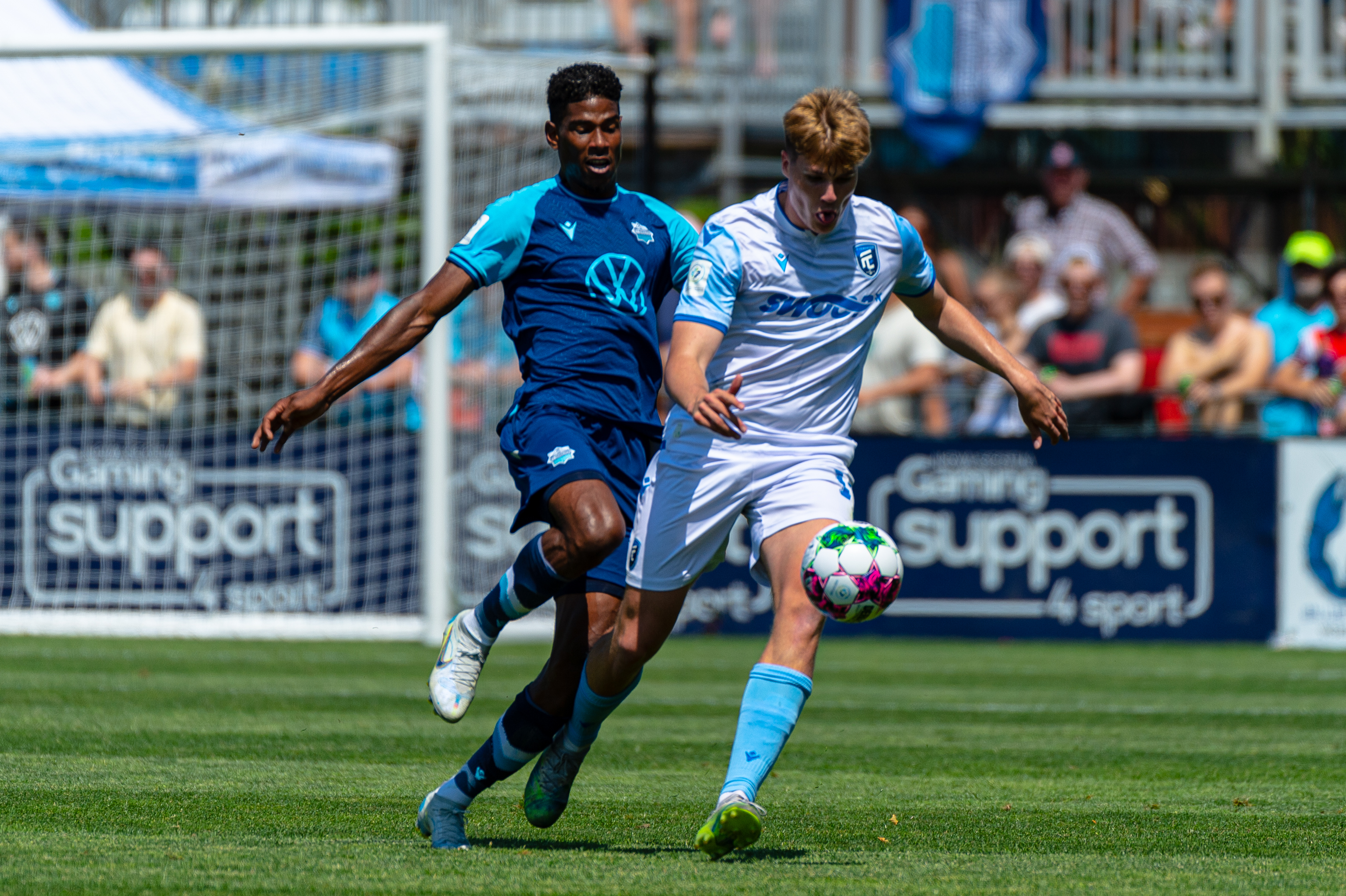 A penalty goal each was all HFX Wanderers and FC Edmonton could produce at Wanderers Grounds on Saturday afternoon, as both sides picked up a point with a 1-1 draw.

Tobias Warscheski gave the visitors the lead 19 minutes into the match, right in front of the loudest section of another impressive crowd in Halifax, firing home a penalty won by Wanderers loanee Wesley Timoteo. At that same end of the pitch in the second half, Nyal Higgins took down Halifax debutant Lifumpa Mwandwe, sending Sam Salter to the penalty spot, where he scored his sixth goal of the season.

Both teams were coming off losses, and will both feel as though they earned that point, but opportunities for one to get all three were there for the taking.

In a Canadian Premier League matchday squad for the very first time was new Wanderers attacker Lifumpa Mwandwe. The 21-year-old English forward recently joined the club from Cymru Premier club Newtown, where he spent the last few seasons before making the trip across the pond.

Mwandwe began the match on the bench, but with Halifax chasing a goal at home, head coach Stephen Hart brought his new attacker off the bench with about 25 minutes left in the match to replace Alex Marshall.

He immediately brought something to the team, a willingness to make runs in behind and a fearlessness that his new team were missing for the first 67 minutes of the match. On a couple of occasions he showed some flashes of brilliance, including a play to dribble through a pair of Eddies players before firing a shot and Andreas Vaikla, unable to beat the sturdy goalkeeper.

There were signs of him being a very direct player, something that was visible on the play that led to HFX’s penalty. Mwandwe made a well-timed run through the Eddies backline, taking a touch in the box before Nyal Higgins came across and pushed him over. Sam Salter took advantage from 12 yards out, scoring the equalizing goal.

While his cameo was brief, he impressed his head coach, and judging by the cheers he was getting when he touched the ball, the fans at Wanderers Grounds.

“In the first half we couldn’t deal with their willingness to run and to press everything, we weren’t dealing with that well,” said Hart after the match. “I thought we moved the ball way too slow. In the second half we made some changes and I thought young Ryan (Robinson) came on started to press higher up, and when Fumpa came on we now had a threat behind.

“What’s a little bit surprising is that Fumpa got fouled five times. He was threatening behind and still at times we were playing too slow, we should have just been playing them to him until they figured it out, but I guess that’s something we will have to learn. Him and Ryan changed the game.”

Results certainly haven’t come easy for Alan Koch’s FC Edmonton side in 2022, but little by little they have shown signs of improvement.

That was again the case on Saturday, as for nearly an hour they were in the lead following Tobias Warschewski’s first half penalty. After a 5-1 defeat in Hamilton midweek to Forge FC, and most of another match in hot conditions in Halifax, The Eddies were fatigued and started to succumb to the pressure that Halifax was able to muster up after a few second half substitutions.

Koch’s team were strong for most of the match, defensively as solid as always, but a mistake from Nyal Higgins to take down Lifumpa Mwandwe and give Sam Salter the chance to tie things up from the penalty spot proved to be a costly one.

The FC Edmonton side from the start of the season, made up of most of the same players but lacking some maturity and composure, would have “capitulated” according to Koch after Saturday’s match, so their ability to hang onto a point is a step in the right direction.

That’s exactly what they did last time these sides met at Wanderers Grounds, as the Eddies took the lead early but collapsed after conceding the equalizer and ended up losing 3-1.

Halifax’s goal coming on a personal error — the foul leading to the penalty — is unfortunate, but is something that can be worked on. Moments like that make it hard to put in a perfect performance, and can lead to dropped points, but in many matches this season they have been a very difficult team to break down when everyone is on their game.

“We get our chances and we take them,” said captain Shamit Shome after the match. “We’re creating several chances, it’s not just one chance. The big step for us is to get more clean sheets and stop the opposition from scoring. We have an identity that we try to follow and that identity is to not allow goals.”

Edmonton has goals in eleven straight matches now, but in eight of those matches they’ve only scored once. If their forwards can find that killer instinct to start putting games to bed when they take the lead, as they had a lot of time to do in Halifax on Saturday, good things will come.

The thing that will improve them even further is limiting those defensive mistakes.

“The ironic thing is that we end up going against our identity, where we’re scoring goals but we can’t stop them going into our net. If we can fix that, and prevent the other team from having as many chances as they do, we’ll find ways to score. The goal for us is to get those clean sheets.

“The key is, if you don’t concede, you don’t lose. That gives you an opportunity to score a goal and win, so that’s what we have to deal with the most if we want to grow from this moment.”

Wanderers defender Mateo Restrepo played his final professional match on Saturday before hanging up his boots to study at the prestigious Icahn School of Medicine at Mount Sinai in New York and pursue a medical career.

Saturday’s match was the 37th and final appearance that Restrepo has made for the club, and in recognition of his last match in front of the Wanderers faithful,

Andre Rampersad also gave Restrepo the captain’s armband to lead out the team, which Restrepo described afterwards as a “beautiful” gesture and one he’ll never forget.

The 25-year-old played all 90 minutes before saying farewell to the fans in Halifax at the final whistle, and being surrounded by people from both teams for handshakes and well-wishes.

“A gentleman, unbelievable leadership, and a top tier professional,” was how Stephen Hart described Restrepo. “I could never ask more of anybody. It’s a loss for us, because regardless of if he’s starting, not playing, whatever, he’s a big part of the dressing room and big part of the team.

“We want to wish him well, because he’s moving on to bigger things. What he’s learned in football and what he applies will serve him well in the future.”

Restrepo looked back on his time in the CPL fondly during his postgame press conference, and took some time to reflect on what was an emotional day for him.

“I woke up today and it was a bit of a weird feeling,” he said. “It was an emotional day but when I got into the locker room I knew I still had a job to do, I knew I still had to be there for my team. Unfortunately we couldn’t get the win, but we came out with a tie and a point at home.

“I’m just flooded with emotions, and I’m really going to miss the club, the fans, the boys, the coaching staff, everybody.”

FC Edmonton’s star attacker opened the scoring in the first half, and put in a strong shift for 72 minutes. When he left the pitch, his absence was felt.

FC Edmonton head back to Alberta, but will be on the road in Calgary for the latest installment in the AL Classico on Saturday, July 30 (4 pm MT). HFX Wanderers remain at home, and will host York United two days later, on Monday, August 1 (3 pm AT/ 2 pm ET).