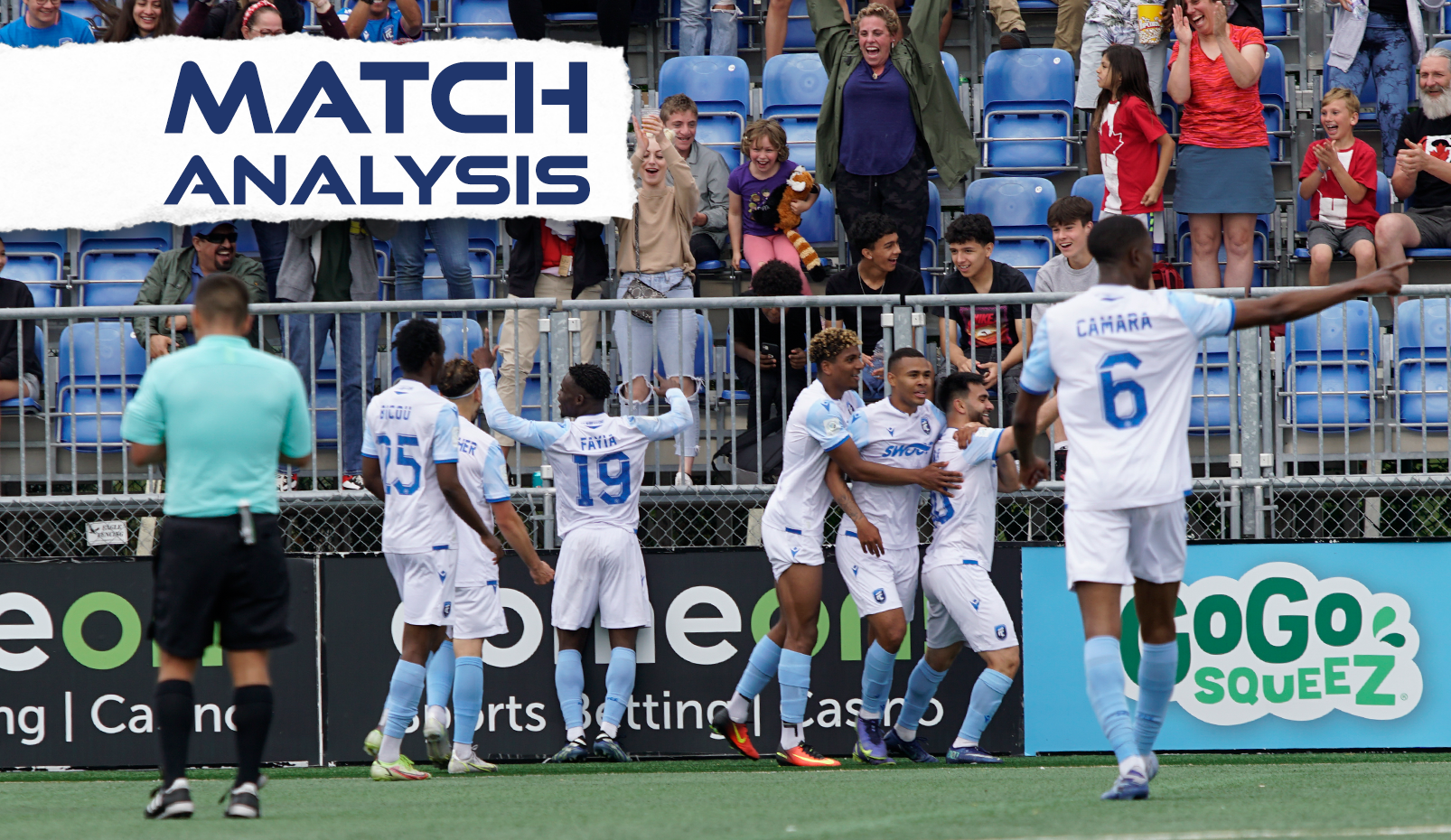 In the Canadian Premier League’s 300th match, FC Edmonton picked up their first-ever victory over York United in a dominant 3-0 fashion. The home side scored early through a Bicou Bissanthe header and then added second-half goals from Mamadi Camara and Gabriel Bitar.

The win tied an FC Edmonton club record for biggest margin of victory in their CPL era, with their only other win by three or more goals coming last September against Valour. For York, meanwhile, it is their eighth straight loss, and the seventh time in that run they have been unable to score a goal.

The Eddies sure love to celebrate Canada Day. Today was the third time they have played on the nation’s birthday and all three times they have come away with victories. In fact, they are yet to even allow a goal against on July 1.

This year, the holiday brought out their best performance of the season to date as they thoroughly outplayed York United from start to finish in this match.

“Very, very happy for the group, on a special day,” said FC Edmonton head coach Alan Koch after the match. “It is Canada Day, I’m an immigrant to this country like many other people so it is a very special day and to celebrate with three points, also in the 300th game for a new league, is very, very special for our entire group.”

They did so through a complete performance, one in which they limited York to just a single shot on target over the course of 90 minutes, while generating six shots, and an impressive four big chances, themselves.

“I think the guys went out and did exactly what we ask them to do,” said Koch. “We ask our players to be selfless, the way we play you have to be willing to do exactly what the team asks you to do, and the players did that, then they get rewarded for that. Then they get the ball, and I think we are starting to show that we have some quality players who can take care of the ball and break teams down.”

After going winless in their first eleven matches of the season, attitudes have quickly shifted in Edmonton as they have now won two of their last three matches. It is the dividends of a group continuing to work hard and trust in the foundation they are building.

“We have been through some very tough moments,” said Masta Kacher after the match, who was celebrating his 150th professional match, “but I think the staff works incredibly hard as much as the players so I think we deserve this win. We have been working very hard, the group is progressing very, very well so it is something that we earned today.”

Today was the sixth time this season that FC Edmonton has scored first in a match. Only one other time have they been able to hold that lead, and today was the first time they not only did that, but built on it as well.

Edmonton had a chance to extend its lead shortly after Bicou Bissanthe’s opener after being awarded a penalty when Osaze De Rosario handled in the box. Wes Timoteo’s attempt from the spot, however, was saved, and all of the sudden it looked like York had an avenue back into the match.

Instead of panicking, as they had in the past, however, Edmonton got into the dressing room at half-time and made it clear they were not going to let that moment define the match.

“We had a very, very positive moment at half-time,” said Koch. “Wes came in and apologized to the group and the group instantaneously, every player to a T, was like ‘hey don’t worry about it, let’s get on with it, we’ve got business to take care of in the second half’. So it shows the camaraderie amongst the group.”

Edmonton came out into the second half, and within 15 minutes had two more goals. They didn’t stop pressing after that either, consistently pushing forward against a demoralized York side forced to open up in order to chase any sort of consolation from the game.

This is the eighth straight match in which FC Edmonton has scored as well, yet another sign that the group is making improvements.

“They’ve shown a lot of progression,” said Koch of his side. “We have shown that we are organized defensively, but I think today we showed that we can actually possess the ball and go create some opportunities. I think we could have scored a few more goals.”

He is certainly right in that, as Edmonton managed 19 shot attempts during the match, six of which were on target. They also had 31 touches inside the York box. The chart below shows all of Edmonton’s offensive actions in the match, including crosses (red and green squares), key passes (yellow squares), and shots (green and red circles).

For a club that has been plagued by injuries and absences like no other this year in the Canadian Premier League, the fact that York United only had to make one change to their starting eleven from last week’s match against Valour was positive.

That change, however, was a big one, as starting goalkeeper Niko Giantsopoulos missed the match through injury. The 28-year-old had limped through large parts of last weekend’s match against Valour after a collision with William Akio. There were some suggestions that if the club’s only other option off the bench against Valour wasn’t a 15-year-old called up that morning Giantsopoulos would have been removed from the match.

Catalano was named the starter, making an unexpected CPL debut. To be fair to him, he wasn’t exactly out of his depth at this level, having played five matches for Toronto FC II in the USL Championship back in 2o18. He has also been training with York United this season while playing for Vaughan Azzurri in League1 Ontario.

The 22-year-old did reasonably well, considering Wednesday was the first he found out he was going to have to make his CPL debut. He made three saves, including a brilliant one of Timoteo’s first-half penalty.

“I thought we didn’t protect him, we didn’t help him, hung him out to try a little bit,” said York United head coach Martin Nash after the match. He did everything he could for us, saved a penalty, and did ever so well, because he came in and did everything we asked, worked hard, made the saves he should make, and saved a penalty. He did really well and didn’t deserve to [allow] three.”

While York had issues getting on the same page in all areas of the field, it was clear in moments that the backline was not quite used to playing with Catalano. The clearest example of this came on the third FC Edmonton goal, where Jordan Wilson turns in the box looking to pass to Catalano, who is in no such position to receive the ball. Wilson should have just cleared the ball here, but confusion reigned at the back on the night for York who allowed three goals for the second straight match.

😮 @FCEdmontonNow score again! @BitarGabriel20 makes it 3-0 and The Eddies are seemingly well on their way to another victory #CanPL | 📺 @onesoccerpic.twitter.com/XINKFvDz77

He may have missed a first-half penalty, but was consistently the architect in attack for Edmonton. In fact, it was his excellent delivery on a corner that caused the chaos from which Edmonton won that penalty in the first place. He picked up an assist on the opening goal, another corner that found the head of Bissainthe, and took the ball off Jordan Wilson before setting up Gabriel Bitar for the club’s third goal as well. He also created five chances and won possession three times in the final third (and a stunning 11 in total).

Edmonton hosts Pacific at Clarke Stadium on Saturday, July 9 (2:00 p.m. MT/ 4:00 p.m. ET) looking to go one better than the 0-0 draw they played to the last time Pacific came to town. York is finally back at home against Forge next Friday, July 8 (7:30 p.m. ET), kicking off a stretch of three home games in their next four. It promises to be a tough stretch as their next four matches come against the league’s current top four sides.