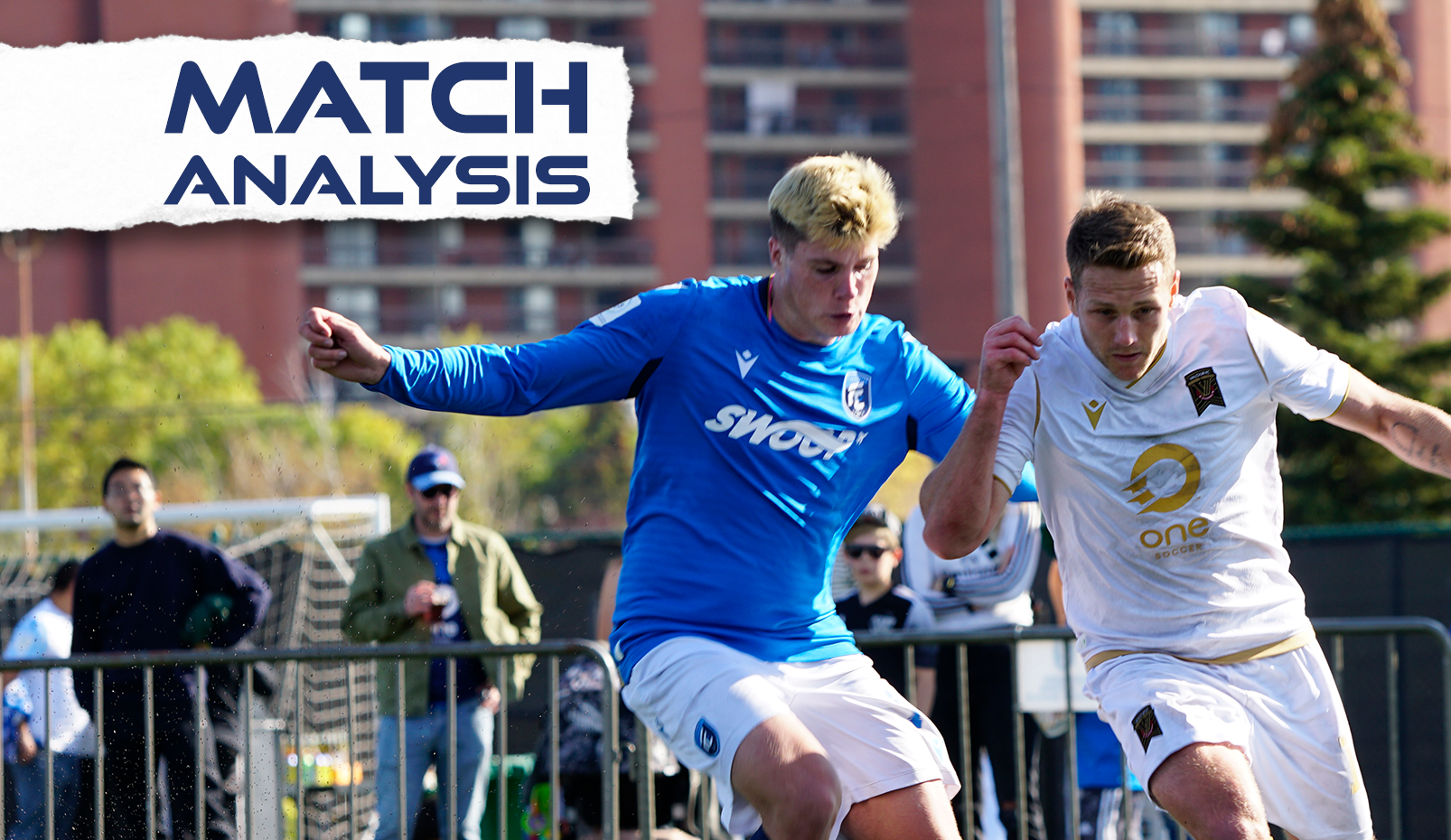 FC Edmonton picked up a memorable victory on the final day of the 2022 Canadian Premier League campaign on Saturday afternoon, beating Valour FC 3-1 in front of their fans at Clarke Stadium.

The visitors took the lead through a Walter Ponce close-range shot 18 minutes in, but that lead wouldn’t last very long. In the 31st minute Tobias Warschewski smashed home a penalty that he won himself, and The Eddies were back in business. Five minutes after Warschewski scored from his set piece, Wesley Timoteo gave The Eddies the lead with another, a magnificent free kick that found the top right corner of Jonathan Sirois’ goal.

With time running out in the second half, and FC Edmonton holding onto to their narrow lead, Gaby Bitar — making his return from injury — scored a free kick of his own, doubling the lead and securing the three points. Alan Koch called it the “perfect end” to his side’s season, and that it was, as FC Edmonton picked up an impressive 3-1 victory to end the year on a high.

Entering their final match of the season, FC Edmonton had only picked up three victories on the season — all of them at home. Head coach Alan Koch spoke in his pre-game press conference about wanting to put on a show in front of the loyal fans and staff that have backed them throughout a difficult year, and that’s exactly what they did.

By now FC Edmonton’s off-field issues are well documented. Owned by the league and a squad full of primarily younger, inexperienced players, there were no expectations for the team coming into the 2022 campaign.

They nicknamed themselves FC Opportunity as a result — a landing spot for players that Koch is often quick to remind likely would not have been professional footballers this year if not for their situation. Those players became a brotherhood that despite difficult circumstances out of their control, never stopped working hard and never took their opportunities for granted.

Two of the best examples of players who have run with their opportunity to get regular, meaningful minutes this season are midfielder Gabriel Bitar and winger Wesley Timoteo. Both have played well enough to earn themselves a professional contract for next season — whether it’s in Edmonton or elsewhere (Edmonton hold the rights to Bitar) — and both were good for Edmonton in this match.

Timoteo scored the winning goal, a free kick from distance that beat Jonathan Sirois — undoubtedly a Goal Of The Year candidate.

An absolute rocket from @WLancaTimoteo 🚀🚀🚀@FCEdmontonNow take the lead in the season finale, and we have another #CanPL banger on our hands 👏👏

Bitar, who came off the bench in the second half in his return from an injury that has kept him out for several weeks, gave his team a bit of a cushion with a free kick of his own a few minutes from the final whistle. For Bitar, who was arguably Edmonton’s best player before he got hurt, the goal was a meaningful one, as demonstrated by his celebration with his teammates and Eddies fans after it hit the back of the net.

Another free kick BANGER from the Eddies 🔥🔥

This time it is Bitar who extends their lead at home!

“It was awesome to get Gaby back, unfortunately the season is finished now,” Koch said after the match. “He had a tough injury but you could see his quality when he came on for those 30 minutes today.”

Picking up the win was “an awesome way to finish a challenging year”, according to the Edmonton boss, who was getting a bit emotional in his postgame press conference.

“I think that was the best possible thing we could have done for our colleagues who work very hard to keep this club going, for our supporters, and for the city of Edmonton. It is very, very special.

“I’ve just been out on the pitch, the players are still on the pitch, nobody wants to leave. The supporters are on the field, the guys are signing autographs for the kids. This is a very special moment and we’ll savour this moment for a long time.”

The 2022 Canadian Premier League season didn’t end the way Phillip Dos Santos and his team wanted it to. After missing the playoffs by a single point a season ago, they were looking to go one step further and make it to the postseason for the first time.

With just a single point in their final five matches of the season and failing to hang onto the playoff position that they held at the beginning of September, they’re on the outside looking in again.

They seemed frustrated on Saturday, epitomised by Daryl Fordyce’s red card for kicking the ball at Gaby Bitar while he was laying on the ground, and then striking Terique Mohammed in the aftermath. It was one of several unnecessary challenges made throughout the match by the Winnipeggers, as their season slipped away.

Despite the disappointing end to the campaign, it wasn’t all bad for the club. They were only officially eliminated from playoff contention on the second-last day of the season, proof that they were there or thereabouts all season long — something that Dos Santos has prioritized since the start.

They end the season with the most points they’ve recorded in a single season, 37, and tie their record for most wins in a season with ten.

With the 2022 season now complete, Valour are still yet to cross that line — one of two teams (with FC Edmonton) yet to make the playoffs through four years — but Dos Santos’ squad will be back hungrier than ever after coming so close but so far.

FC Opportunity has been FC Edmonton’s nickname since preseason, and its message remained true until the final minutes of their final match of the 2022 CPL season.

A large portion of their roster this year were new professionals and players looking for another opportunity to prove they belong — with head coach Alan Koch even describing it as “the last chance saloon” early in the year. Almost every player in the squad were new this season, but one of the exceptions to that was 17-year-old goalkeeper Joseph Holliday.

Holliday has been with the club since he was 12 years old, and has been one of FC Edmonton’s backup goalkeepers across the 2021 and 2022 seasons. An academy graduate, he’s waited patiently for his first crack at the professional game, and with a few minutes left in Saturday’s game at Clarke Stadium, Holliday was substituted into the match in his hometown.

The smiles and high fives from his teammates showed that it was a proud moment for the entire squad, and with emotional loved ones in the stands as well.

I cried all the way home. I’ve never been so proud. Thank you to everyone who has supported him since he was little truly. special thank you to Tom & Dave Fath & FC Edmonton past & present coaches & players. He wanted it here & Im so happy I got to see it 💙 pic.twitter.com/qnL1sLB158

“Five years coming, there’s not a better feeling,” Holliday said after the match with a huge smile on his face. “Seeing the crowd, seeing everyone after and signing autographs, it’s the little things. I’ve been dreaming of it since I was 12, I’m 17 now, and it finally happened. Hard work pays off and it’s a dream come true.

“I’m very thankful for the club, FC Opportunity has helped a lot of guys and I’m forever grateful to be one of them. Even if it was just a couple minutes to get my name out there, there’s no other place I’d rather do it.”

Also making his professional debut with a few minutes to spare was Felix N’sa, a loanee from York United and younger brother of The Nine Stripes’ right back Chrisnovic. He suffered a long term injury early in the season, and he too was rewarded for his patience, hard work and determination to get himself onto the pitch.

“I just had a deep, philosophical chat with Gaby (Bitar), and I have massive, massive respect for him, but more than just scoring that goal for himself, he helped me and he helped the team do something that we really wanted to do today,” started Koch. “We wanted to reward two players that have given so much to this team all season long. Felix N’sa was injured when he arrived here, he rehabbed all year long and he’s trained, it was a beautiful moment to give him his first professional minutes today.

“And to reward one of our young, Edmontonian kids Joseph Holliday — who has been at this club for many, many years — to get his first professional minutes today was a very special moment. We wouldn’t have been able to do that if we didn’t get that third goal that gives us a bit of leverage to make those substitutions.

“I was grateful to Gaby for coming back, for the goal for himself, but also for what he did for his teammates too.”

The FC Edmonton attacker secured three points for his side with a spectacular free kick, and was involved all afternoon.