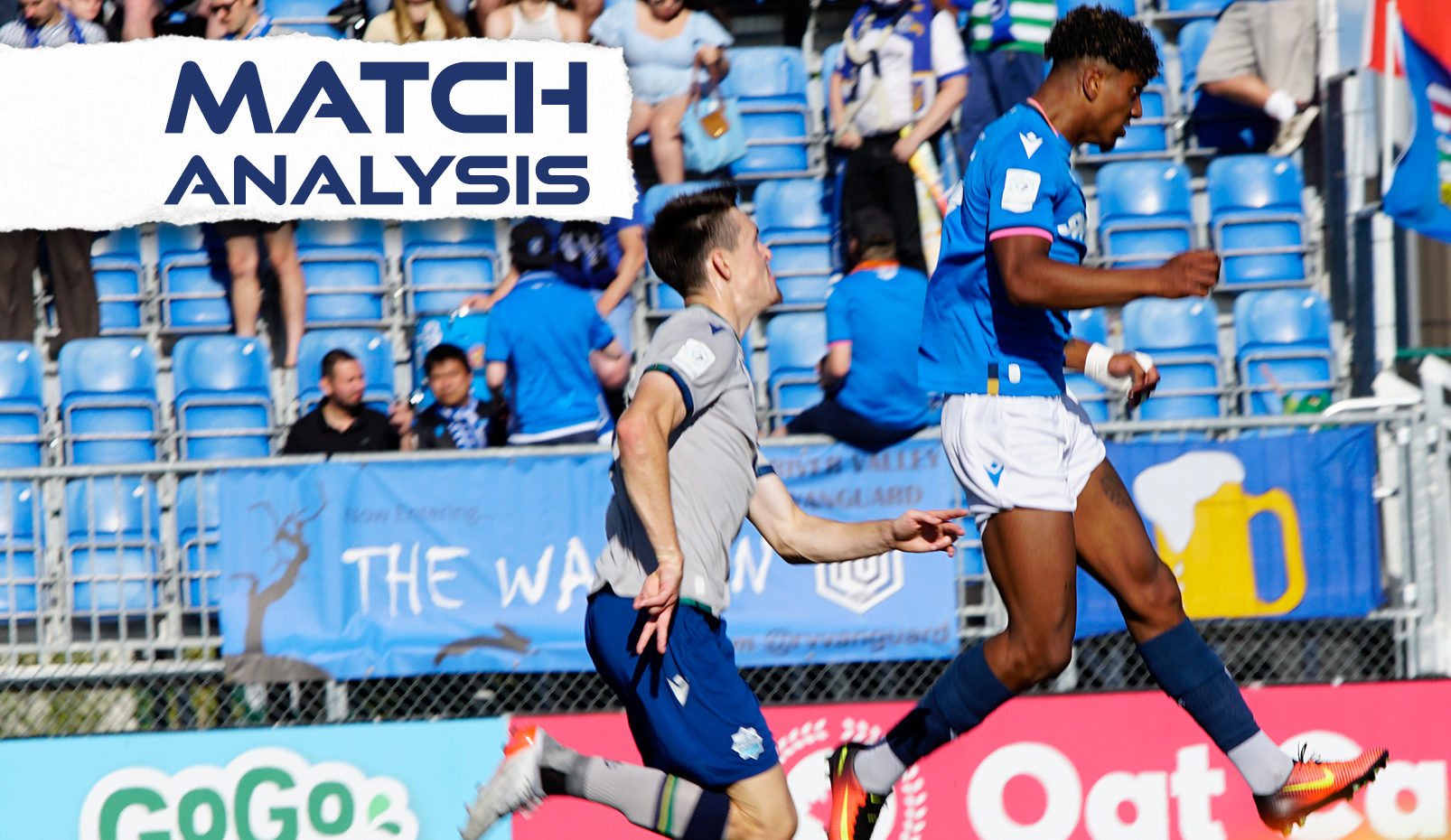 FC Edmonton collected their third win of the season on Sunday at Clarke Stadium, playing at home after six straight on the road. They defeated HFX Wanderers FC 3-2, thanks to a pair of goals from Tobias Warschewski plus one from Azriel Gonzalez.

Gonzalez opened the scoring in the first half by tapping it in after a great long-distance strike by Wesley Timoteo resulted in a rebound that fell fortuitously. The Wanderers would even it up before halftime though, as Zachary Fernandez won a penalty and Samuel Salter buried it from the spot to make it 1-1.

In the early second half, though, the Eddies took over again. Warschewski scored his first by finishing after an excellent run into space and pass across from Timoteo. Just four minutes later, he found the net again with an outrageous curling shot from the goal line outside the box that somehow found the back post. The Wanderers made a late push to get back into it, scoring once when Jérémy Gagnon-Laparé’s attempted screamer hit the post and bounced in off the back of FCE ‘keeper Darlington Murasiranwa, but the Eddies held onto the one-goal lead to preserve three points.

Playing six consecutive games on the road was both physically and mentally taxing for FC Edmonton, who hadn’t played at Clarke Stadium since July 9 heading into Sunday. From kickoff in this game, though, the Eddies looked rejuvenated and a little more comfortable playing on familiar ground.

Playing with an identical lineup to that which bagged a draw last weekend in Winnipeg, Edmonton were purposeful with the ball, moving it confidently out of the back. Nyal Higgins, playing in the centre of the back three, distributed the ball extremely well, not missing a single one of his 48 attempted passes. The hosts were very patient moving the ball between the centre-backs and wingbacks, looking for opportunities to either pass into midfield or send Azriel Gonzalez and Tobias Warschewski in behind with longer balls. Edmonton’s centre-backs completed a whopping 79 passes between each other, and they played incredibly comfortably, holding the ball well while waiting for attacking players to open up spaces or make runs.

The below pass map for FCE’s centre-backs (Luke Singh, Bicou Bissainthe, and Higgins) helps demonstrate just how much they cycled possession between each other, attempting more ambitious long balls occasionally to try and test Halifax but mostly waiting for moments to strike.

Midfielders Shamit Shome, Simon Triantafillou, and Mamadi Camara were more direct with their passing, and their pass accuracy suffered as a result, but their job was more often to play forward, line-breaking balls to try and spring attacking opportunities.

Wesley Timoteo agreed after the game that the Eddies are more confident playing at home. The Clarke Stadium turf is where they train almost every day, and their comfort level in that stadium certainly contributes to how well they passed the ball and outwaited their opponent.

On top of that, head coach Alan Koch explained that it was an excellent moment for his club to be able to feed off what was a strong crowd in Edmonton, and reward devoted fans for their support in this difficult season. Ultimately, this result is a welcome reward for his side after some very difficult and frustrating moments this year.

“As the game was going on, I normally try not to have too many thoughts, because so much can happen in any instance of the game,” Koch said. “But even when they scored for 3-2, I was so proud of our group. I think we showed today the progression of who we are and what we’re made of. I think the players showed how resilient they are after everything we’ve gone through, and I think we played some good football at times today.

“So I’m very very happy; I’m proud of this group. I know I say that every single week, but I’m really proud of the players, staff, everybody that works for this club to keep things afloat. I’m incredibly proud of everybody.”

Wanderers struggle in attack again, sluggish with the ball

Not for the first time in 2022, Stephen Hart used the word “lethargic” to describe his team after a loss. They were slow moving the ball, and although they, like Edmonton, often played a lot of passes around their back three when they took possession, it was less purposeful and they were far more liable to give the ball away cheaply.

The only difference in the Wanderers’ lineup compared to their win last weekend was that Fumpa Mwandwe missed out due to injury, and as a result his team was missing that spark of energy and creativity in the number 10 role.

Hart was particularly annoyed at the hole his team dug for itself, pointing out that all three of Edmonton’s goals came in part because of mistakes from the Wanderers. The defenders were caught flat-footed on the first two goals to allow forwards to get free and finish the chances, and although the third was an excellent shot from Warschewski, no defender was covering the back post for the corner kick.

“We were very lethargic to mark up, players were finding space in between our lines,” Hart said. “And all three goals were preventable. All three goals. We were just way too lethargic, not doing the simple basics of defending, and we paid for it.”

In both halves, Halifax seemed to find their feet and improve after a poor start. They ended the game with a slight edge in possession over the Eddies, mostly because of how they grew into the match after falling behind each time.

According to Hart, though, that wasn’t good enough. Certainly, it’s positive that they were able to adjust and nearly got back into the game toward the end, but conceding cheaply — in Hart’s view — made it an uphill battle.

“We did much better in the second half because we started to take away the space better, but in all honesty when you give up goals like that and you’re playing from behind, you’re away from home, you’re putting yourself behind the eight-ball,” Hart said.

The Wanderers have a long week of training ahead of them now, as they prepare to host Cavalry FC on Labour Day in a match where they’ll be expecting a significant bounce-back performance.

FCE show growth and maturity in preserving lead after conceding

Heading into Sunday’s game, the Eddies had dropped 16 points from winning positions this year — far more than any other team in the CPL. When Halifax scored to make this match 3-2 with about 10 minutes to play, a familiar feeling of doubt may have begun to creep in, as it wouldn’t be the first time the club has been denied a celebratory result by a late goal.

This time, though, Edmonton locked things down extremely well after conceding the second goal. In fact, they didn’t allow a single shot in the last 10 minutes after that goal, shutting Halifax down despite the visitors having over 65 percent possession in those final stages. Only 22.4 percent of the last 15 minutes were played in Edmonton’s defensive third, as they clogged up the midfield and refused to allow the Wanderers any time on the ball to play between the lines.

A few times in those last few minutes, Eddies players demonstrated their growth and improved maturity by making smart choices to kill off the game. They would take the ball to the corner flag, or recycle possession rather than give it away, or shoot a clearance off an opposing player to win a goal kick.

Warschewski scoring the third goal to give Edmonton more of a cushion certainly helped their confidence, but they’ve had moments this year — like the 3-2 loss to York United two weeks ago — where they conceded one late, and immediately conceded another by being unable to collect themselves. In this game, they dusted themselves off quickly and ensured they would hang on to all three points.

“We even spoke about it at halftime,” Koch said. “A couple guys came into the locker room at halftime like, ‘Good job guys, we’ve got this, we’ve got this.’ And to be honest, my message was completely the opposite, it was we haven’t got it, because we should’ve scored two or three goals in the first half and we didn’t. I wanted the players to be frustrated, I wanted them to be, ‘Hey, let’s go on and really take this to the next level.’

“I felt like we did that. Obviously scoring the third goal to go 3-1 up, you could feel there’s a little bit of an air of relief. But I’m thinking, a lot of the supporters in the stands or watching us on TV were a little concerned when we conceded that second goal, because it’s 100 percent correct; we’ve struggled to hang onto leads, and that’s why today’s very satisfying.”

The players themselves can feel that improvement in their group as well. Wesley Timoteo pointed out that this might not have been a result they would have secured earlier this year, saying that he’s proud of how the squad has come together recently.

Unfortunately for the Eddies, they’re back out on the road for their next game — a trip to Ottawa on Friday, followed by a game at York United the following week — but with three home matches left on the schedule they’ll be looking to continue building and improving as much as they can.

The smooth German forward was excellent in this game, scoring two goals to lead his side to victory. He was a constant threat in the half-spaces and inside the box, and he has a quality with the ball that few others in the league can match. His teammate, Wesley Timoteo, spoke glowingly of him postmatch:

“We’re used to it. Tobi’s an amazing player, an amazing person,” Timoteo said. “He’s shown it right away, at the beginning of the season with the bicycle kick, and today he showed again who’s the real Tobi Warschewski. We see it every day, we’re lucky to see it every day and he just did it today in the game and we’re proud of him.”

The Eddies are back on the road yet again after this game, as they head to the capital on Friday, Sept. 2 to play Atlético Ottawa at TD Place (7 p.m. ET/5 p.m. MT). The Wanderers, meanwhile, have an extra couple days of rest, as they host Cavalry FC in a Labour Day matinee on Monday, Sept. 5 at the Wanderers Grounds (2 p.m. ET/3 p.m. AT).