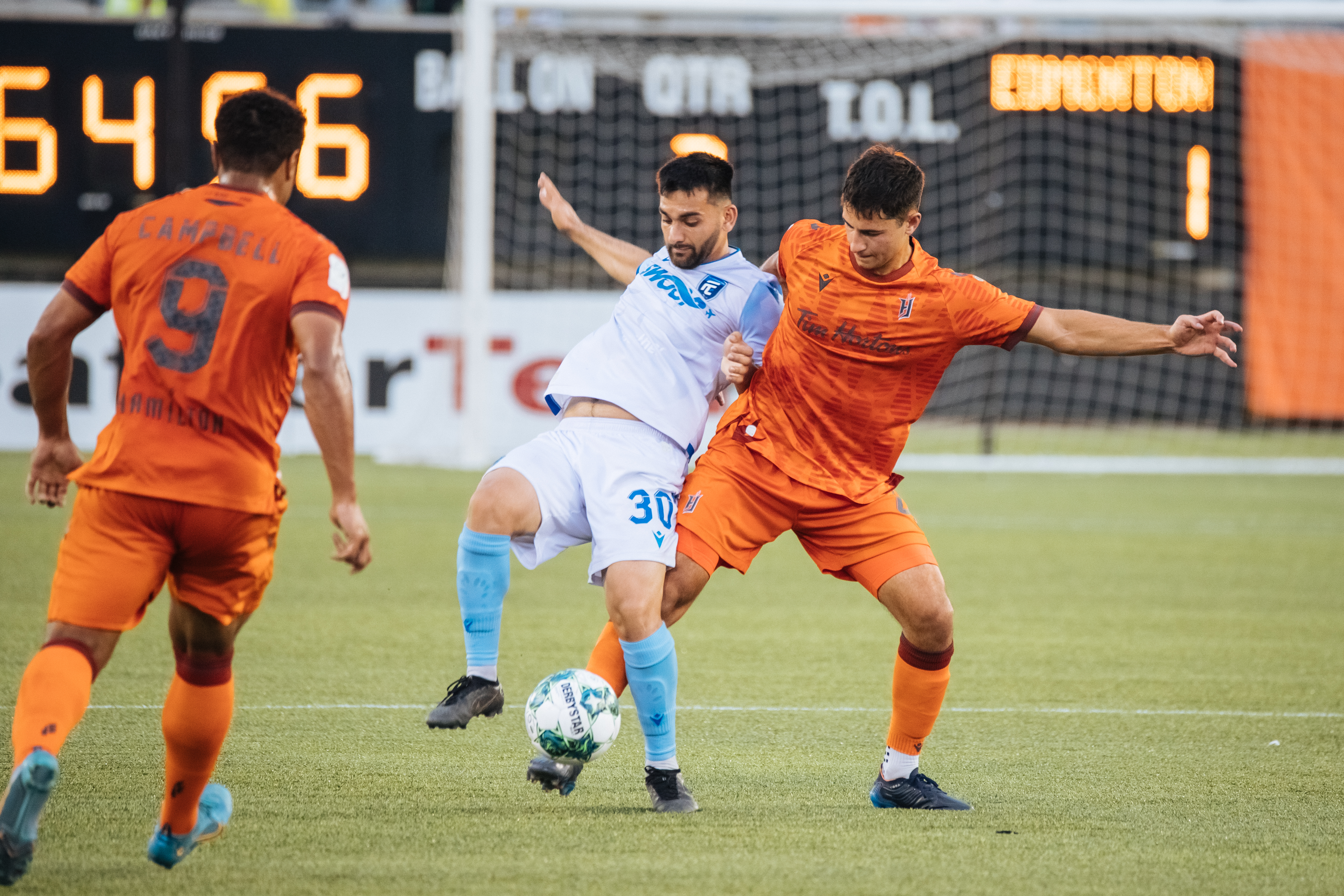 A historic first half, in which they scored four goals for the first time in club history, allowed Forge FC to cruise to a 5-1 win over FC Edmonton. It was also the first time in Forge history that they have scored five, and only the second time FC Edmonton has conceded that many. They also did so in a 5-1 loss to Pacific FC last season.

Speaking of fives, Woobens Pacius became the fifth player in CPL history to score a hattrick. Aboubacar Sissoko and Kyle Bekker also found the back of the net during the first half, while Kairo Coore added a late consolation goal for the visitors.

The half-time whistle didn’t come soon enough for FC Edmonton. After allowing two Woobens Pacius goals during the first 45 minutes of the match, Forge struck again twice during injury time at the end of the first half, both from corner kick efforts.

After a bit of a slow start, in which they did not put a shot on target for the first 25 and a half minutes of the match, Forge took over. Aside from the goals, they dominated every facet of the half: 23 touches in the Edmonton box to just one for the visitors, 1.71 expected goals to 0.02, 10 shots to just one…the list goes on.

Edmonton, meanwhile, just couldn’t catch a break, quite literally. According to head coach Alan Koch part of their strategy during the match was just getting to the intervals. They had initially looked to get to the hydration break unscathed on an incredibly hot night at Tim Hortons Field, but Forge scored just before that was allowed to happen.

As aforementioned, they then allowed two more goals just before the half-time whistle. Despite the dominant performance that Forge had put on, things would have looked a lot different if Edmonton went into the half down only two goals, as opposed to 4-0.

The highlight of the half for Forge was unquestionably Kyle Bekker’s added time Olimpico, a brilliantly struck effort from the corner that travelled directly into the net.

KYLE BEKKER with some @ForgeFCHamilton MAGIC, giving his team a 4-0 lead over @FCEdmontonNow directly from the corner kick #CanPL | 👉 https://t.co/hishXepRT3 pic.twitter.com/N9FPNDgChG

Woobens Pacius became just the second player in Forge FC history to score a hattrick on Tuesday night. Tristan Borges was the first earlier this season during a 4-3 win, also against Edmonton.

After also scoring against York United in Forge’s last match, Pacius has now firmly cemented himself in the league’s Golden Boot race at the halfway point of the season. The 21-year-old Pacius now sits second in the league with seven goals, three behind Alejandro Diaz of Pacific, having played three fewer matches.

Pacius is also now tied with David Choinière for second all-time in terms of goals scored in all competitions for Forge. Considering he has only been with the club since August of 2021, that is a very impressive feat.

Pacius demonstrated that ability brilliantly on his third goal of the match. After brilliantly creating space for himself, he was able to smash home a quick shot despite Edmonton defenders converging on him.

His ability to shift defenders in the box also helped him to win a penalty in the first half. He stepped up to the opportunity himself, and calmly slotted the ball past Andreas Vaikla.

After a pair of 1-0 losses in their last two home matches against Atlético Ottawa and Valour sides who sat back and absorbed pressure, Forge look to be making significant progress in learning how to break down low blocks.

Edmonton again tried to play a low block against Forge, and initially did so successfully. But a variety of different factors allowed the Hamilton outfit to eventually break through.

“It is something we have just worked on of just making sure that we are finding the moments to get there quick before that block forms,” said Smyrniotis. “Then when the block forms just really being meticulous on when we attack, in what zones we attack and get the ball in and sometimes you just have to lose the ball on purpose to counter-press the opponent and then find them disorganized from there, those are a few things we have been working on because I think it is going to be important for games coming up in the future as well.”

They had plenty of time to work on all of these aspects during an 11-day break between matches. They were also able to cause a lot of problems on set pieces, perhaps a byproduct of all that training time as well.

Forge’s ability to counter-press and win the ball high up the pitch in good areas is an aspect of their game that is worth noting in recent matches. They won possession seven times in the final third on Tuesday night against Edmonton, and did so 12 times last match against York.

They have also had success attacking down the right flank in recent matches. Once again the majority of Forge’s attacks, 49 per cent, came down that flank. Rezart Rama was once again excellent in starting attacks from that side, with 19 passes into the final third, while Aboubacar Sissoko drifted over at times to help David Choinière create overloads on that flank.

Below is a look at the passing work that those three players (Rama is 24, Sissoko 33 and Choinière is 7) did during the first half alone down the right flank against Edmonton.

Despite Sissoko being removed from the match, and Choinière mostly shifting over to the left during the second half, Forge continued to dominate the right flank. Terran Campbell, who came on for Sissoko, made a number of good runs and created some good opportunities while playing in a more wide role down that side.

Smyrniotis mentioned that seeing multiple looks down that flank is another benefit from this match that the club can carry forward.

Edmonton, for their part, felt they got away from their game plan early on in the match, which allowed Forge even more dominance.

“We were chasing around the field a lot tonight,” said FC Edmonton coach Alan Koch, “and that is partially because Forge is very, very good. I think partially we struggled.”

There were a lot of Forge players who were excellent during the match, and many who contributed to Pacius getting his chances. But with the way the young striker took those once they came to him, he is fully deserving of this honour.