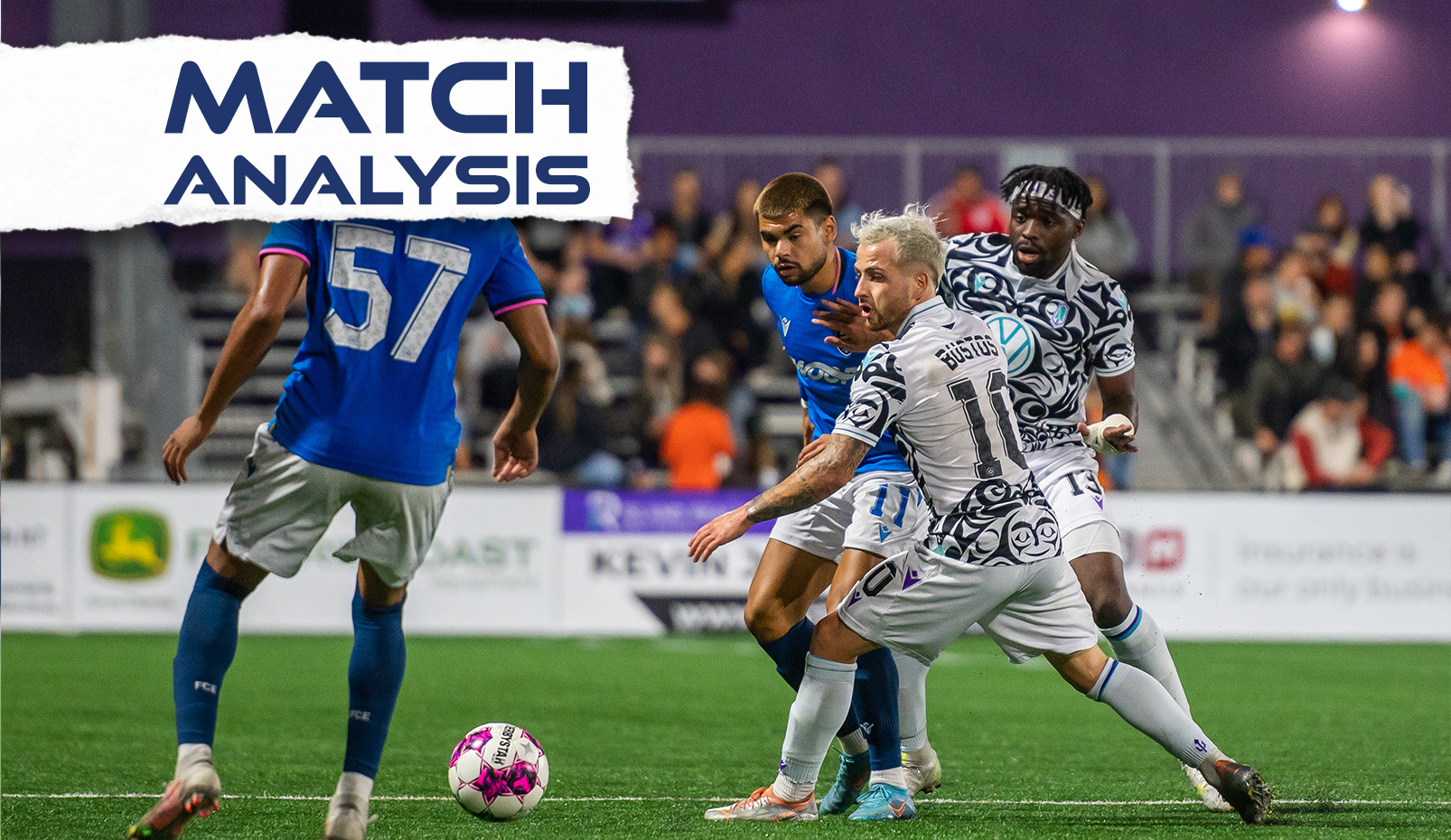 Pacific FC took one step closer to the playoffs on Friday, as they downed FC Edmonton 1-0 at Starlight Stadium.

They’d get off to a dream start in this game, too, scoring inside just one minute thanks to Marco Bustos, who did well to get on the end of a great ball from Manny Aparicio.

From there, Pacific would do well not to give up that lead the rest of the way, either, seeing this result over the line to vault them to second in the table, capping off a strong end to the month of September for them.

Strong start allows Pacific to put one foot in playoffs:

Pacific had every reason to want to get off to a strong start on Friday. Especially after a powerful pre-game ceremony to mark National Truth and Reconciliation Day, Pacific, who donned their Indigenous-designed kits, seemed to have extra fuel to start the game.

With it being their last home game of the 2022 CPL regular season, as well as the final home regular season game for captain Jamar Dixon, who announced this week that he’d be retiring following the campaign, that also added to their early-game energy, too.

As a result, they got on the board quite quickly. In fact, it took less than 30 seconds.

After winning the ball high up the field, Aparicio managed to find the head of Bustos in the box, and from there, that gave Pacific a 1-0 lead that they’d fail to give up the rest of the way.

In a defensive masterclass, one that saw them give up just 0.13 Expected Goals (xG) on five shots to Edmonton, including none that reached the target, Pacific ensured that they’d pick up all three points on this special day, making sure to mark the occasion in style.

“We talked about it beforehand,” Pacific FC head coach, James Merriman, noted afterwards. “We knew that there were a lot of things happening before the match, so that it was gonna be really important to keep our focus and keep our mentality.”

Through that, they extended their unbeaten run to four, as they’ve managed to find some good form at a perfect time. Plus, thanks to that, they’ve also put a late-August three-game losing streak far out of mind, having recaptured the form that has had them near the top of the standings for most of this year.

Off of the back of solid defensive play, much like in this game, they’ve been hard to breach in games, conceding just nine times in their last 14 matches (all competitions), which is a remarkable defensive run.

Because of that, they’ve now all but ensured their return to the playoffs, too. With their magic number down to just one, meaning that any combination of Valour dropping a point or Pacific gaining a point in both of their last two games will get them in, it seems as if it’s a matter of when, not if that the CPL’s defending champions will book a playoff spot.

After worries that they’d follow up their memorable 2021 CPL title win by missing the playoffs altogether, they showed why they were able to lift silverware last season, finding a way to shine when their backs were up against the wall.

As a result, it feels like with Pacific, just making the playoffs seems to be too small of a goal for them in their last two games. Now just two points off first place, they’ll have every reason to push for the inaugural CPL regular season title, as well as guarantee home-field advantage in the finals (should they make it that far), while also ensuring they get into the playoffs in top form.

With a strong belief within their group, one that hasn’t wavered despite having to endure a rollercoaster of a season, they feel that now they can peak at just the right time, finishing the job that they’ve started here.

While Pacific was quite happy to nab a goal early, on the flipside, it had to be frustrating for Edmonton to be on the end of that.

Especially given that they had warned all week that they were expecting just that from Pacific, to then be picking the ball out of their net after just 30 seconds had to hurt, as it meant a week of planning went out the window after that.

Plus, given how Pacific had looked on the goal, it felt like the game was on track towards being a blowout, too, which would’ve only added to Edmonton’s frustrations.

“It was frustrating,” Edmonton head coach, Alan Koch admitted of the first goal. “We knew Pacific would come flying out of the gates as it was a big game, a big occasion, so we knew they were going to be energized for the game.”

Yet, despite that, that didn’t drag Edmonton down too much. Instead, much as they’ve done all season, they just snuck at it.

As a result, even after giving up the early goal, they’d ensure that would be the only goal that they’d allow on the night, as they managed to go the rest of the game without conceding anything else.

In fact, it’d overall be a pretty good defensive performance from them as a whole, as they allowed just 0.78 xG from Pacific on nine shots, with just two of those reaching the target, one of those being Bustos’s attempt.

Against a Pacific team that likes to grab goals at home (they lead the league in home goals after this game with 22), to give them a run for their money like that is no small feat for Edmonton.

“We’re a resilient group,” Edmonton head coach, Alan Koch, said afterwards. “We’ve been through a lot. So I’m not surprised by the resilience to not capitulate, to hang on, to weather the storm as we did.”

Because of that, credit has to be given to their back line for the performance. From the play of Terique Mohammed and T-Boy Fayia at full back, as well as Bicou Bissainthe and Cale Loughrey at centre back, Edmonton did well to make things easy for Andreas Vaikla in goal.

Plus, a lot of Edmonton’s strong defensive play came from their ability to get their whole team involved defensively, too, as it was overall a strong team game for them defensively.

Therefore, although it was probably a game for them to forget offensively, especially considering the recent growth they’ve seen in that area of their game, they made up for that in how they defended.

They defend like that on most nights, and they give themselves a very good chance at winning, making it a formula that you’d imagine they want to maintain going forward.

“Defensively we did very well,” Mohammed said post-game. “Our communication as a group (was good), we were compact, so honestly I’m happy with the performance by us. Yes, we could have gotten more out of this game, but defensively, I think it was a good game for us.”

Naturally a creative player, one who came through the youth ranks as a #10, there hasn’t always been opportunities for Marco Bustos to play as a true attacking midfielder in the professional game.

Often deployed out wide, as is the case with many #10s in the modern game, he instead typically creates from the right side for Pacific, cutting inside on his dangerous left foot to either find teammates or create shots of his own.

In this game, however, he returned to more of a free role as a #10, and he thrived in it, scoring the early goal, but also otherwise remaining very involved in possession.

Sometimes dropping as deep as his centre backs to help his team build-up, before bursting forward into the final third, there wasn’t much ground on the field that he didn’t cover in this game.

Through that, it added another dimension to Pacific’s attack. Already having had the services of Aparicio in midfield, to have Bustos and Aparicio creating together in the middle made for a tough task for Edmonton to handle, as those two seemed to connect well in possession.

As a result, that freed up space out wide for Pacific’s wingers, Josh Heard and Gianni Dos Santos, as well as the always-overlapping Kunle Dada-Luke and Georges Mukumbilwa, who did well to drive forward into the wide channels.

Seemingly every time Bustos got on the ball in space, he found a way to make things happen. Be it by completing a dangerous pass, dribbling a defender or taking a shot, he was a handful to deal with, which is exactly what you’d want from someone in a free role.

“We spoke before the match and in the last couple of days, as we wanted to play him centrally as more of a #10 with the freedom to go and go and find the ball and connect from the build-up and to go forward,” Merriman explained. “As a result, his run right in the first minute is a great example, it was an excellent run, and it was central, and he took his goal well.”

“But then he also got touches on the ball, he was getting involved in the middle of the field, and with his quality, with his technique, it helped us dictate play and control the tempo of the game.”

“I think a big part of playing in that role was to have the license and the belief from the coach to be free, to roam where the space is,” Bustos added. “When I’m given freedom like that, I find the ball a lot more, and that creates space for guys around me.”

Because of that, it’s going to be interesting to see if he gets more run in that position going forward. It makes sense why it happened in a game against Edmonton, as they can be tough to break down in their defensive block, but will the same work in other games, such as in the playoffs?

Yet, while the answer is unknown, if he is able to get on the ball in such a game as he did in this one, there’s no reason why that can’t be the case, making it something to ponder for Merriman, who is trying to get his team’s offence rolling the same way their defence has.

Knowing that he has a dangerous player like Bustos to turn to in that position, that could very well be the solution that he desires, helping them find that offensive gear just in time for the playoffs, should they indeed see things over the line in the coming weeks.

“When everyone’s healthy and everyone’s available to play, we’re up there with one of the best teams in the league, in my opinion,” Bustos confidently stated.

As mentioned earlier, Bustos was everywhere for Pacific, and that was evident considering that he finished with 69 touches, the highest of anyone in this game who wasn’t a defender. You add in that he finished with 45/51 passing, had three shots and one dribble, it was overall a solid night at the office for the Pacific #10, one that certainly helped his team pick up all three points on the day.