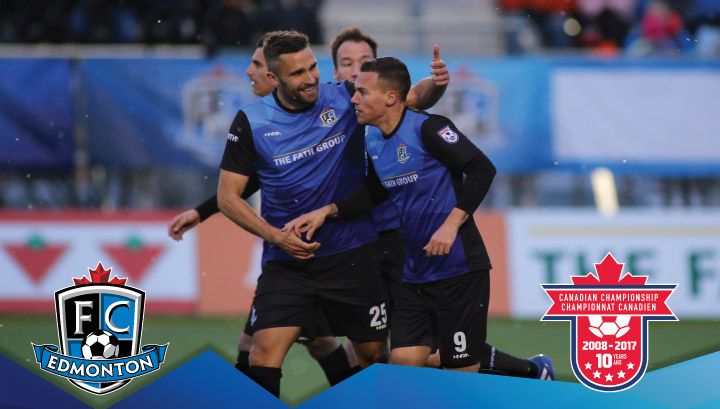 EDMONTON, A.B. — FC Edmonton is set to renew its rivalry with Ottawa Fury FC in the Canadian Championship with the first leg of the Qualifying Round at 5:30 PM MT this Wednesday, May 3 at TD Place, marking the beginning of another Voyageurs Cup campaign for the Eddies.

Wednesday’s first leg will be the first match-up between the two former North American Soccer League (NASL) rivals since September 2, 2016 and their fourth meeting in the Canadian Championship overall since the Fury made its debut in 2014.

The Fury are a much-changed side since making the transition to the United Soccer League (USL) in October of 2016, adding nine new players including former Puerto Rico FC defender Ramon Martin del Campo and six-foot-five striker Tucker Hume. Defender Eddie Edward renews pleasantries with FC Edmonton after joining his hometown club Ottawa in 2016 after spending three and a half seasons in Edmonton.

“We’ve watched [Ottawa] two or three times now and there’s no question they’ve made substantial changes from last season,” FC Edmonton head coach Colin Miller said. “It doesn’t matter what league a team is in, you have to treat each opponent the same and we’ll do our best to get a result for where we want to go in this competition.”

The competition’s 10th season will be FC Edmonton’s seventh with the Eddies getting the better of the Fury in three of four occasions. In his four seasons with FC Edmonton, striker Tomi Ameobi has become the competition’s all-time leading goalscorer with five, including a four-goal campaign in 2015.

Before last season, the Eddies came close to advancing from the competition’s semifinal stage on two occasions, narrowly defeated on aggregate 5-4 by the Montreal Impact in 2014 and 3-2 by the Vancouver Whitecaps in 2015. The Fury came close last season in their first visit to the semifinals with a 3-2 aggregate loss to Vancouver.

Despite the losses, the incentive to progressing to the semifinals is abundantly clear to both sides with the opportunity to face 2016 MLS Cup runner-up and reigning Canadian champions Toronto FC in the next round.

“I spoke about it [Monday] morning to the players before training started that it’s the carrot dangled in front of ourselves and Ottawa,” Miller added. “To draw arguably the biggest club in Canadian professional football in the next round is massive for both clubs. We know what this competition means to the club and its supporters and we know that is the incentive.”

Fans can stream the match on CanadaSoccerTV (youtube.com/c/canadasoccerTV/live) and the second leg of the Qualifying Round is slated for kickoff in Edmonton at Clarke Stadium on Wednesday, May 10 at 7:00 PM MT. Tickets are available at tickets.fcedmonton.com!