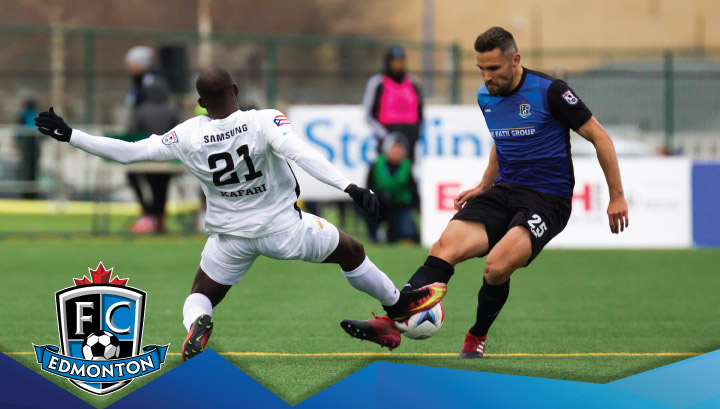 EDMONTON, A.B. – FC Edmonton and the San Francisco Deltas are set to make introductions in the North American Soccer League (NASL) this Sunday, May 14 as the expansion side visits Clarke Stadium for the first-ever meeting between the two clubs. Kickoff is slated for 2:00 PM MT.

Sunday’s contest comes after a midweek match for FC Edmonton against Ottawa Fury FC in the second leg of the Canadian Championship ended 3-2 for the Fury and 4-2 on aggregate, eliminating the Eddies in the Qualifying Round for the second-straight year. The loss came in the club’s fourth match in 12 days, with this weekend’s clash wrapping up one of the busiest parts of the schedule for the Eddies.

“We’re looking for a reaction from Wednesday night’s disappointment and to keep the three points in Edmonton against a San Francisco side that has settled in to the NASL well at this early point in the season,” FC Edmonton head coach Colin Miller said. “It’s a home game, and they become very important in North American sports. You have to win your home games, at least pick up points from them, and that is the intention for Sunday.”

The Deltas haven’t looked out of place in the first seven games of their inaugural season, earning nine points (2W-3D-1L) and sitting third in the NASL Spring Season standings. Led by Canadian and former Ottawa Fury FC head coach Marc Dos Santos, the Deltas have a heavy Canadian connection with defenders Nana Attakora and Karl Ouimette, midfielder Kyle Bekker and most recently Maxim Tissot, who signed with the club this past Tuesday.

“We know they will bring the mindset of trying to go on and win the game,” Miller added.  “They’re coming off a fabulous result against North Carolina last week, where not many teams win. I know they’ll prove to be difficult opposition, but I say week in, week out that it’s about what the Eddies do on the day.”

Coach Miller has a full squad to pick from with the exception of defender Karsten Smith, who is on the verge of returning from a lower-body injury the New York product suffered in training camp. The Eddies look to schedule an intersquad match next week with the purpose of giving players such as Smith extra playing time, with a week of no fixtures following Sunday’s match approaching due to Tuesday’s schedule change.

READ: May 21 match against New York Cosmos rescheduled to June 7

This Sunday’s match at 2:00 PM is on Mother’s Day, and FC Edmonton is doing two Mother’s Day Gift Basket Giveaways, with one being given away at halftime in the Mother’s Day Relay and another through social media where fans can post a picture of their mom at the game to win a basket! 800 pairs of gardening gloves will also be given out at Sunday’s game courtesy of Hole’s Greenhouse.

Kickoff to the match is at 2:00 PM MT and can be streamed live on NASL.com.