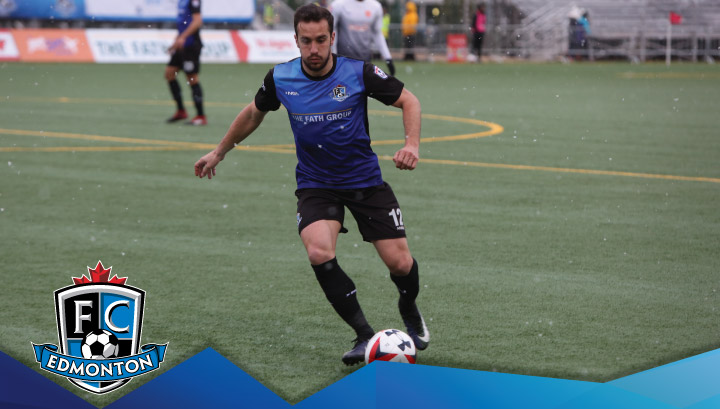 EDMONTON, A.B. — FC Edmonton begins a three-game road trip this Saturday, April 29 in Florida when the club faces Miami FC in North American Soccer League (NASL) action at FIU Stadium. Kickoff is at 5:30 PM MT and can be streamed live on NASL.com.

The trip to Miami follows the club’s first win of the season at Clarke Stadium a week prior with a 2-1 result over Puerto Rico FC. Midfielder Dustin Corea tallied his first goal of the season with a stunner into the top-left corner while Dean Shiels scored his first goal for FC Edmonton. The goals earned the two spots in the NASL’s Team of the Week on Wednesday.

The result was a confidence-booster for the club after the Eddies were held pointless through its first three matches. The Eddies look to use it as motivation heading into an early crucial road trip through Miami, Ottawa for the Canadian Championship and a rematch of last season’s Championship Semifinals with the Indy Eleven.

“We let ourselves down the previous week against [North Carolina FC], but we really bounced back with a solid performance this past Saturday night,” FC Edmonton head coach Colin Miller said. “The win was critical for us, not in terms of pressure from where we were in the league, but just getting a result because we had played well in the previous home game and got nothing out of it. We deserved the three points and got a very positive performance following a defeat, so I’m really pleased with where the group is at heading into this important road trip.

“It’s given everyone a lift. You could see it in training this week and the players are in a better frame of mind.”

Miami and Edmonton have met only three times in their history, with Miami undefeated (3W-0L-0D) and yet to concede a goal to the Eddies. Miami are among the league’s best in the shot department with 64 — 13 better than the second-place Indy Eleven — and four players in double-digits. Effective in possession and moving the ball, Miami have five players in the NASL top-10 for completed passes.

“We now face arguably the best-assembled team in the NASL in Miami, and we know we will have to be at our best on Saturday night,” Miller said. “It’s not about Miami, and I keep saying that. We’ve done our prep work this week, showed video this morning and the guys have a good idea of what we’ll be up against.”

Defender Abdoulaye Diakité rejoins FC Edmonton in Miami and is available for selection while Karsten Smith continues to work his way back from a lower-body injury. With three matches in 11 days, Miller expects each player in the travelling 18 to play a role over the next stretch of fixtures.

“There may be one or two changes to the team that starts [against Miami], but there’s a method to our madness in what we’re trying to do,” Miller added.