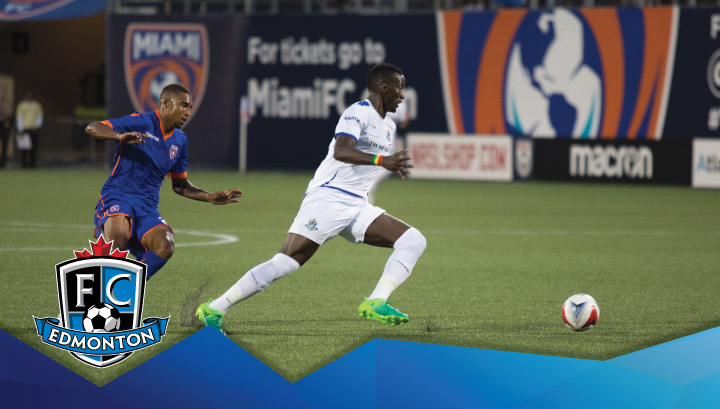 The loss comes in the first of a three-match road trip – the club’s longest of the season – which continues Wednesday, May 3 when the Eddies visit Canadian rivals Ottawa Fury FC in the Canadian Championship.

“The players worked their backs off against one of the best teams in the NASL,“ FC Edmonton head coach Colin Miller said. “If we were a bit more clinical in the attacking third we would’ve made more of a game out of this one. We let ourselves down at times with our final ball and it’s disappointing we weren’t able to get anything more.”

FC Edmonton made three personnel changes from the 2-1 win last weekend against Puerto Rico FC at Clarke Stadium, bringing in forward Jake Keegan for Dean Shiels and Canadian international Ben Fisk for Sainey Nyassi. The return of centre-back Abdoulaye Diakité to the Starting XI pushed another Canadian international in Adam Straith to the midfield over captain Nik Ledgerwood.

FC Edmonton’s best chance of the half came early in the sixth minute when Straith was given a clean look on goal from 35 yards out, but his shot went high and wide of Miami goalkeeper Daniel Vegas.

The Eddies were let off in the 16th minute when Miami FC midfielder Michael Lahoud hit a well-struck shot from 30 yards out, beating goalkeeper Chris Konopka but not the crossbar.

Miami kept applying pressure on the Eddies and soon earned themselves the lead. A good one-two passing play between Kwadwo Poku and Enzo Rennella was finished off by Poku into the bottom left corner for the go-ahead goal ten minutes before the break.

The hosts would carry that 1-0 lead into halftime.

Midfielder Ariel Martinez almost doubled the lead for Miami in the 61st minute with a shot from distance that just missed the left post.

Two minutes later, Miami was able to double its lead through Stéfano Pinho, who took the through ball and beat Konopka one-on-one to the right corner.

Down a pair, the Eddies pushed forward looking to get themselves back in the match. Halftime substitute Sainey Nyassi came close to halving the Miami lead when the midfielder hit a hard shot off the crossbar from inside the box in the 77th minute.

The 2-0 scoreline would hold at the final whistle. FC Edmonton now travels to Ottawa and train for two days before the all-important first leg of the Canadian Championship against the Fury on Wednesday, May 3.

“We’ve got three games in a week and will have to shuffle the pack on Wednesday against Ottawa,” Miller said. “We had seven first-team players sitting out or on the bench here tonight, but I wanted to give as many players a run-out as we could. We nowhave to regroup and pick ourselves up ahead of the Canadian Championship. “