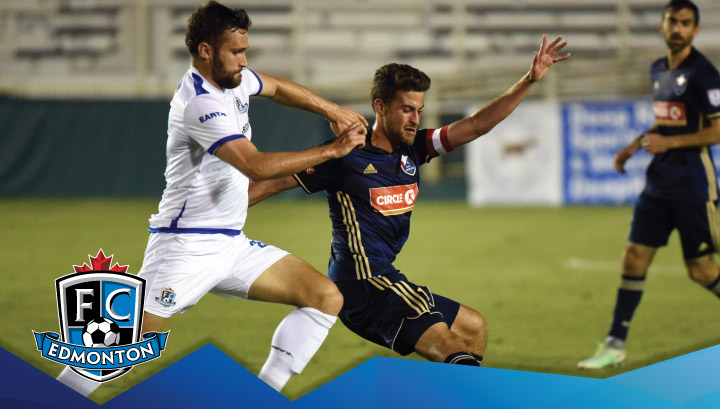 CARY, N.C. – Two goals from Lance Laing and Nazmi Albadawi did the damage for North Carolina FC in the first half, handing FC Edmonton its third loss of the North American Soccer League (NASL) season with a 3-1 defeat on April 15 at Sahlen’s Stadium at WakeMed Soccer Park.

Striker Tomi Ameobi scored the first goal for FC Edmonton this season in the 71st minute, but it only served as consolation for the Eddies, who open the Spring Season winless through its first three matches of 2017.

“The three goals we conceded were very disappointing, and I don’t think Carolina will have an easier 45 minutes all season than they did in the first half,” FC Edmonton head coach Colin Miller said. “Poor defending has been the story of our season so far. We had a positive response in the second half and I’m pleased for [Ameobi]. He put in a good shift up front and was rewarded for it with his goal.”

North Carolina immediately jumped out to a 1-0 lead in the fourth minute from a well-struck free kick from former Eddie Lance Laing. After defender Albert Watson conceded the foul, Laing took his chance from 25 yards brilliantly, firing the ball into the top left corner past FC Edmonton goalkeeper Chris Konopka.

On 23 minutes, the hosts had their second goal. North Carolina’s Nazmi Albadawi made a great play to open up space for himself in the midfield before running at the FC Edmonton defence and firing low past Konopka into the right corner of the net for the 2-0 lead. The Eddies found themselves in a hole halfway through the first half.

FC Edmonton began to control more of the ball in the final 20 minutes of the half and made a substitution five minutes from the break, bringing on Allan Zebie for Nico di Biase to earn the Paris, Fra. product his first minutes of the season. The Eddies would go into the break down by a pair at 2-0.

The Eddies started the second half by bringing on Sainey Nyassi for Jake Keegan, but North Carolina soon had its third. Steven Miller’s cross from the right was put away by Matthew Fondy, who found the inside track on the FC Edmonton defence to one-touch the ball under Konopka for the 3-0 lead.

FC Edmonton began to pound on the pressure and was soon rewarded with its first goal of the season. Striker Tomi Ameobi tapped the ball home from in close after Dean Shiels’ header from a Nyassi cross was deflected off the crossbar. The Northern Ireland native did well to redirect the rebound off the bar right to Ameobi, who was waiting on the left post.

Ultimately, Ameobi’s goal wasn’t enough to spur FC Edmonton to a comeback as the whistle blew with a final 3-1 scoreline. The Eddies return home and prepare to break its losing streak on Saturday, April 22 at Clarke Stadium. Kickoff is 7:00 PM MT.