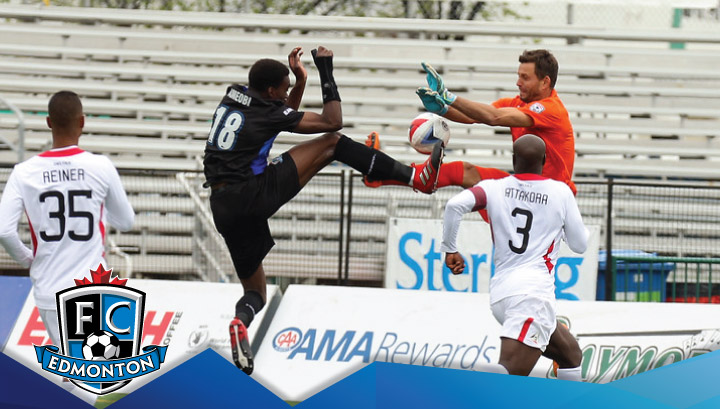 EDMONTON, A.B. — FC Edmonton carried the play for 89 minutes, but a free-kick from San Francisco Deltas midfielder Cristian Portilla in the final minutes found its way untouched into the back of the net to give the visitors the three points in a 1-0 contest at Clarke Stadium on Sunday, May 14.

Despite positive opportunities for a go-ahead goal from FC Edmonton in the first half, the game remained scoreless after 45 minutes of play. Cristian Portillo scored the winning goal in the 89th minute of the match, while between the posts goalkeeper Romuald Peiser registered a clean sheet.

“It’s absolutely devastating,” FC Edmonton head coach Colin Miller said post-match. “I feel so bad for the players who put so much into that game. It was bad enough if we had drawn the game, but to get absolutely nothing is difficult. The difference was a mistake and that’s what cost us. Take nothing away from this San Francisco team, they are very good and they provided an entertaining game as well, but to give up a goal like that is criminal.”

Goalkeeper Chris Konopka returned to the starting line-up for the Eddies after giving way for Tyson Farago during the midweek Canadian Championship match against Ottawa Fury FC. Defender Adam Straith started at centre-back over Albert Watson, who started on the bench for FC Edmonton.

Konopka was forced into action in the opening minutes of the match after Deltas midfielder Kyle Bekker fired two shots on goal that were parried away by the veteran goalkeeper.

The Eddies first shot on goal came on ten minutes after some neat play down the left-wing. The home side kept possession in tight corners before working the ball to Dustin Corea, who fired a shot on target that was held by Peiser.

Ten minutes later, Edmonton found themselves with a pair of chances. Sainey Nyassi found Nik Ledgerwood at the back-post with a cross, but the captain’s header across goal was cleared off the line. Almost immediately after, Ledgerwood found Dustin in the box with a cross before the Salvadoran winger tested the reactions of the goalkeeper with a volley on target that went straight into the chest of Peiser.

Dustin was a key factor for Edmonton throughout the first half as he continued to cause all kinds of problems for the opposition. This time, the winger intercepted a ball in midfield, before playing a well-placed through ball in behind the Deltas’ defence. Striker Jake Keegan ran onto the pass and was in on goal, but his left-footed effort went over the crossbar.

The last chance of the half fell to the visiting side. This time Bekker played in Tyler Gibson with a pass before he beat his man and fired a shot from close range that was well saved by the left-hand of Konopka. The 0-0 score line would hold through 45 minutes of play.

The Eddies nearly opened the scoring within the first two minutes of the second half. After a direct ball over the top from Abdoulaye Diakité, Keegan found himself in on a breakaway, but his effort went inches wide of the near post.

The Deltas would get the winning goal in the 89th minute of play. The opposition were awarded a free-kick after Ledgerwood brought down his man on the left-wing. On the ensuing free-kick, Portilla whipped in a cross towards the back-post that evaded everyone in the box and bounced into the far-corner of Konopka’s net. Portilla’s goal held through the remaining minutes of the match as the visiting side secured all three points.

“The players’ attitudes have been terrific,” Miller said. “The players are giving absolutely everything at the moment and we hope our luck will change soon. We did not deserve to lose the game; we should have picked up more from this game. The players are working very hard to turn things around. We are creating chances and getting into good areas, but we aren’t finishing at the moment.”

FC Edmonton take a break from NASL action after next weekend’s match against the New York Cosmos was rescheduled to June 7. Next up, the Eddies host the Indy Eleven at Clarke Stadium on Saturday, May 27 at 7:00 PM MT, and tickets are available at tickets.fcedmonton.com!