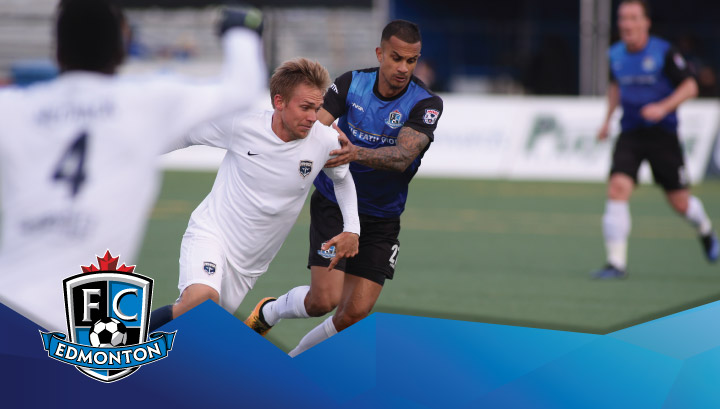 An early goal from Armada midfielder Zach Steinberger was the difference on the night, giving Jacksonville back-to-back wins over the Eddies in this early 2017 season.

“I thought the players were terrific tonight,” FC Edmonton head coach Colin Miller said post-match. “I’m in total disbelief we didn’t win. We will play a lot worse than this and win and it was one of those nights for us. The quality of the attacking play was terrific and I’m devastated for our players.”

Despite a positive start from Edmonton, it was the visitors who opened the scoring on six minutes. Armada worked a short corner kick to Steinberger, who was waiting inside the box. Steinberger opened up before firing a shot past Konopka on the near post to give Jacksonville the 1-0 lead.

Edmonton continued to press Armada in their half and earned their first chance of the match on 18 minutes. After a giveaway inside the Armada half, captain Nik Ledgerwood found Dustin Corea inside the box with a headed pass. Corea took a touch before firing a shot on goal that was well saved by Patterson-Sewell.

The home side continued to search for the equalizing goal as the first half was coming to a close. Corea found Shawn Nicklaw after some nice link-up play down the right wing. The right-back delivered a good cross into the box, but Jake Keegan’s header went just wide of the far post.

Edmonton’s best chance of the half fell on 43 minutes when Shiels received a pass down the right wing. Shiels found Ameobi again with a terrific low cross, but Ameobi couldn’t get enough contact to direct the ball into the back of the net.

Despite the strong first-half performance, Edmonton headed into the half time break trailing Jacksonville by a 1-0 score line.

FC Edmonton started the second half on the front foot. Konopka’s goal kick was met by the head of Ameobi, who flicked the ball onto Keegan. The winger found himself in behind the Armada defence, but his looping effort fell short of the Armada goal.

Corea continued to cause problems for the Armada defence throughout the entirety of the match. This time, Ledgerwood found the winger at corner of the box with a pass. Corea took a touch before firing a shot towards the near post that was saved by the Armada ‘keeper.

The second-half substitutions of Ben Fisk, Sainey Nyassi and Sabri Khattab nearly worked to perfection. Nyassi latched onto a ball over the top before firing a low cross into the box to Ameobi, who was inches away from tapping the ball into the net if it wasn’t for the Armada defence coming up with a brilliant interception.

Edmonton came inches away from securing a point again in the final five minutes of the match. Adam Straith got his head onto an in-swinging corner kick, but his attempt hit the crossbar. The rebound fell to Ameobi who fired a shot that went just wide of the Armada goal.

FC Edmonton were unable to open up the Armada defence and the 1-0 score line would hold through 90 minutes of play.

“The crowd was fabulous tonight, they got right behind us and brought a lot of energy to the match,” Miller said. “We now have a tough match to prepare for in Carolina next week. But if we play like this, we will win more matches than we will lose.”