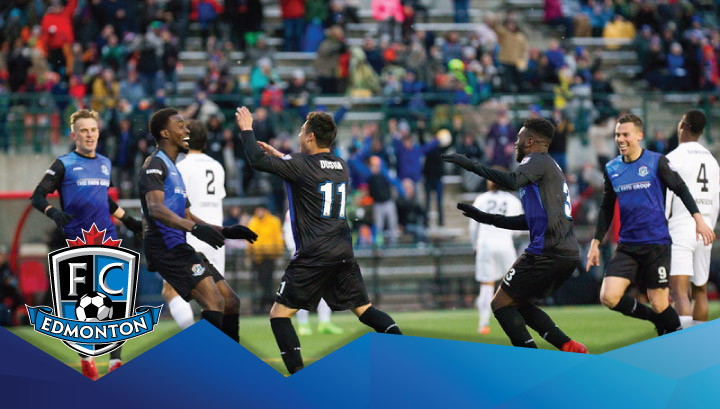 Puerto Rico spoiled the clean sheet for the Eddies deep into stoppage time when Jordi Quintilla scored in the final seconds of the match, but it served only as consolation as FC Edmonton was able to secure its first victory of the season in front of a solid Clarke crowd in chilly conditions.

“We were terrific tonight,” FC Edmonton head coach Colin Miller said post-match. “The players’ attitudes right from the kick-off were very positive. We wanted to do the right thing, but we stayed patient at the same time. We wanted a positive reaction from the loss last week and we got that tonight from the players.”

Miller made three changes to the side that faced North Carolina FC the previous week. Academy product Allan Zebie made his first start of 2017 season, while Pedro Galvao replaced injured Netan Sansara at left-back and Sainey Nyassi started on the wing in place for Jake Keegan.

The Eddies started the match on the front foot and the home side nearly opened the scoring inside the first five minutes. El Salvadorian international Dustin Corea played in Tomi Ameobi behind the Puerto Rico back line, but the striker’s shot was well saved by goalkeeper Trevor Spangenberg.

The visiting side came close to scoring in the opening 20 minutes of play. Hector Ramos found himself on the end of a curling cross from a corner kick, but his headed effort went just wide of Chris Konopka’s net.

Both sides had their chances to score in the closing moments of the first half. Ramirez found space in behind the Edmonton defence, but his shot sailed over the crossbar. Moments later, Shiels was at it again as he laid off a pass towards the top of the box for Zebie. The 23-year-old attempted to curl a shot on target, but his effort went over the crossbar as well.

The 0-0 score line would hold through 45 minutes of play.

The visitors nearly opened the scoring on two different occasions early on in the second half. Ramon Soria was left unmarked at the far post following a cross, but his header went just wide of the mark. Shortly after, Ramos latched onto a loose pass from Konopka, but the striker’s attempt went off the post.

Miller brought on Ben Fisk for Sainey Nyassi on the hour mark and his substitution paid dividends immediately. Fisk found Corea at the top of the box before he fired a shot that flew past a helpless Spangenberg to give the Eddies the 1-0 lead.

Corea continued to cause a lot of problems for the visiting side. Shortly after opening the scoreline, the winger latched on to a pass from Shiels, but his shot was well saved and held by Spangenberg.

Shiels continued to cause problems for the entire Puerto Rico team as the match progressed and he was rewarded with his first competitive goal for FC Edmonton. Shiels curled in a terrific cross towards the back post that bounced past everyone and found the corner of the net. 2-0 for the Eddies through 70 minutes of play.

Puerto Rico pulled back a late goal deep into stoppage time when second half substitute Quintilla latched onto a pass inside the box and his shot beat Eddies goalkeeper Chris Konopka. Despite the late goal, Edmonton held on in the final moments to secure all three points.

“We deserved the three points tonight,” Miller said. “They were our 12th man tonight.  We gave back a performance that was gratifying for them in this weather. I am very proud of the fans and we are very grateful for their support. Moving forward, we have three critical games coming up and we needed these three points. It’s good for the confidence of the entire squad and it will only help us.”