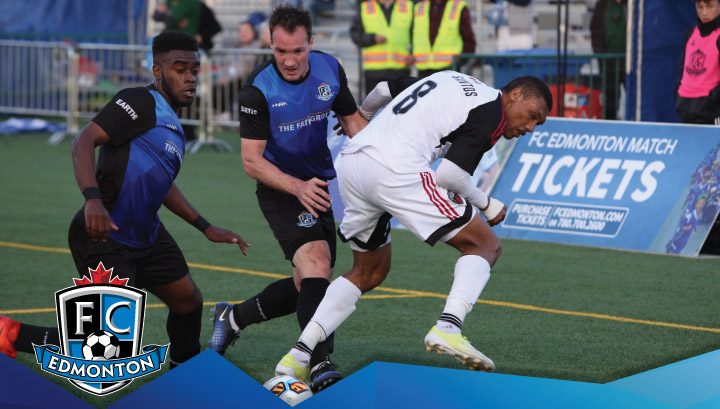 Match Recap: FC Edmonton lose out in Canadian Championship after defeat to Ottawa
May 10, 2017
by
Kassim Khimji | @KassimKhimji

EDMONTON, A.B. — FC Edmonton was eliminated from the Canadian Championship, 4-2 on aggregate, following a 3-2 defeat to Ottawa Fury FC in the second leg of the competition at Clarke Stadium on Wednesday, May 10.

The victory means the Fury advance to the semi-finals and face Major League Soccer’s (MLS) Toronto FC beginning Tuesday, May 23 in Ottawa.

After a 90th minute goal in the first leg gave Ottawa the 1-0 advantage heading into Wednesday, an away goal inside the first 45 seconds left the Eddies with an early deficit of three goals that wasn’t able to be reduced despite first goals of the season from striker Jake Keegan and midfielder Sainey Nyassi.

Defender Abdoulaye Diakité was sent off midway through the second half for FC Edmonton, and striker Steevan Dos Santos notched the game-winning goal deep in stoppage time to secure advancement.

“It’s very disappointing, especially with the way we started,” FC Edmonton head coach Colin Miller said post-match. “I was proud of the guys’ effort in the second half. I asked them at the break to go and try and win the second half and they put in a good effort for the most part.”

Ottawa opened the scoring in the opening minute after a giveaway in the Eddies’ half allowed Sito Seoane to walk in one-on-one with goalkeeper Tyson Farago, before the forward beat Farago with a low shot to the left corner.

Just before the ten-minute mark, Ottawa nearly doubled their lead after a pair of chances. Sito was at it again as he ran at the Edmonton defence, but his shot struck the woodwork and bounced back into play. Dos Santos got to the rebound, but his attempt missed the empty net and went out for a goal kick.

Tyson Farago started his second match for Edmonton this season and he came up with a huge save on the 15-minute mark. The visitors were awarded a free kick after Nik Ledgerwood brought down his man outside the box. Ryan Williams struck a beautiful free kick, but Farago got across his net to tip the ball out for a corner kick.

The Eddies pulled one back in unorthodox fashion on the half-hour mark after a blunder by Fury goalkeeper Callum Irving. The keeper dropped the ball inside his own box without being aware of Keegan behind him, who was slow getting back on defence after missing a header. Keegan took the ball off from Irving and calmly took his opportunity to level the score on the night at 1-1.

The Eddies suffered a setback shortly after Keegan’s equalizing goal after the Fury were awarded a penalty kick following a handball inside the box on Albert Watson. Dos Santos stepped up to the spot and placed his shot low into the corner past Farago.

Edmonton would head into the half-time break trailing Ottawa by a 2-1 score line, 3-1 on aggregate. Miller made several changes with a triple substitution to begin the half. Shawn Nicklaw, Dean Shiels and Netan Sansara made way for Tomi Ameobi, Adam Straith and Sabri Khattab.

The Eddies scored their second goal of the match to tie it up on the night after a counter-attack. Following a Fury corner kick, Ledgerwood carried the ball and made the most of the 3-on-2 situation as he found Nyassi on the right-hand side of the box. The Gambian kept his composure and found the back of the net to level the match after 60 minutes of play.

Edmonton were forced to play the remainder of the match with 10-men after Diakité was sent off. After consulting the assistant referee, the decision was made that Diakité prevented a clear goal scoring opportunity and was issued a red card.

Ottawa sealed their path to the Canadian Championship semi-final deep into stoppage time after Dos Santos secured his brace to give the Fury a 3-1 win, 4-2 on aggregate.

“We have to regroup and go again on Sunday,” Miller said. “I’m expecting a positive reaction against a very good San Francisco side. We know we can be better. There were positives to take from today and we have to build on that and correct one or two things.”

The Eddies face a quick turnaround as they face expansion side San Francisco Deltas for the first time this Sunday, May 14 at 2:00 PM MT at Clarke Stadium. Tickets for the Mother’s Day match are available at tickets.fcedmonton.com.