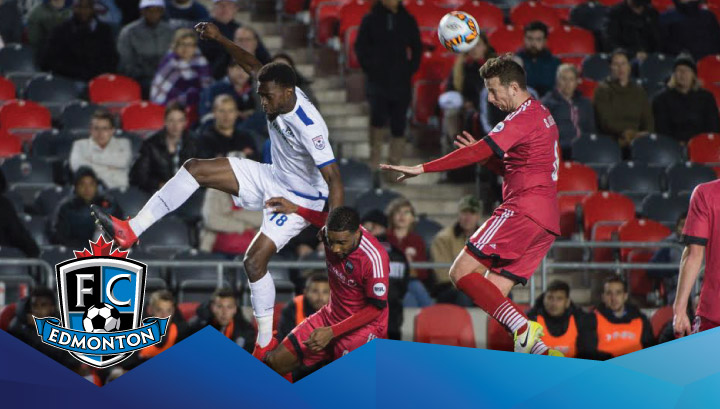 OTTAWA, Ont. – A late winner from Ottawa Fury FC forward Ryan Williams denied FC Edmonton a result on the road in the first leg of the Canadian Championship Qualifying Round on Wednesday, May 3.

The match opened up offensively in the second half as both teams pressed for a winner, but it was Ottawa that found the back of the net in the final minutes off a cross that rebounded into the middle of the box for Williams to capitalize on.

Both teams regroup for the second leg next Wednesday, May 10 at 7:00 PM MT in Edmonton at Clarke Stadium where the Eddies will look to respond from the defeat and fight to progress to the semifinals. The winner of the two-legged tie faces MLS runners-up and Canadian champions Toronto FC in the next round.

“It was a very tough, physical game with few opportunities between the two sides, but it’s disappointing with the manner we gave away the winning goal,” FC Edmonton head coach Colin Miller said. “We all win together and when we lose it’s my team. It’s only half-time in the tie, that’s the reality of the situation, and now they’ll come to Edmonton where it’s very difficult for visiting teams to get any sort of result.”

The Eddies filled its minimum Canadian quota of three starters with four, beginning in between the pipes with goalkeeper Tyson Farago for his first start of the 2017 season. Captain Nik Ledgerwood started in the midfield alongside Allan Zebie, while Ben Fisk rounded out the Canadian content in the left of midfield.

Chances were minimal in the opening 20 minutes, with the only notable action coming in the 18th minute when both FC Edmonton left-back Netan Sansara and Ottawa’s Eddie Edward earned yellows after coming together following a challenge.

FC Edmonton’s first chance came in the 25th minute when Fisk’s cross was delivered well into the box, but midfielder Dustin Corea couldn’t get all of the header.

The Eddies almost ended the first half with a goal if it weren’t for a smart stop in close from Fury goalkeeper Callum Irving. Fisk made a great run and crossed it into the middle for Ameobi, whose touch deflected to Dean Shiels. The Northern Ireland international’s shot was parried by Irving and sent over for a corner.

The half would end deadlocked at 0-0. Farago was up to the task in his engagements, coming out regularly to break up crosses and corners and rising up strongly to the task.

The first action of the second half required a heroic tackle from right-back Shawn Nicklaw. On a partial breakaway for the Fury, the Guam international darted in from the right and made a great diving tackle to deny Ottawa the opportunity on goal.

FC Edmonton would’ve had the go-ahead goal in the 58th minute if it weren’t for a great double save from Irving. Ameobi’s first shot was saved and deflected into open space for Zebie, but the keeper charged across and denied a point-blank shot for the Eddies.

Minutes later, the Fury answered with their own opportunity with a free-kick from 25 yards out. Ryan Williams’ free-kick was blocked by the FC Edmonton wall, then the ensuing rebound was redirected twice in the box before being cleared by Diakité.

Just seconds before the game went into stoppage time, the Fury took the lead. The cross in from the left couldn’t be controlled by Farago and the Eddies defence, and Williams buried the rebound into the open cage for the 1-0 lead and late game winner.

“We have a huge game in the league on Saturday in Indianapolis and we have to regroup and go again next Wednesday,” Miller added.

FC Edmonton returns to North American Soccer League (NASL) action this Saturday, May 6 in Indianapolis in a rematch with the Indy Eleven from last season’s Championship semifinals. The second leg of the Canadian Championship follows next Wednesday, May 10 at Clarke Stadium. Kickoff will be at 7:00 PM MT.