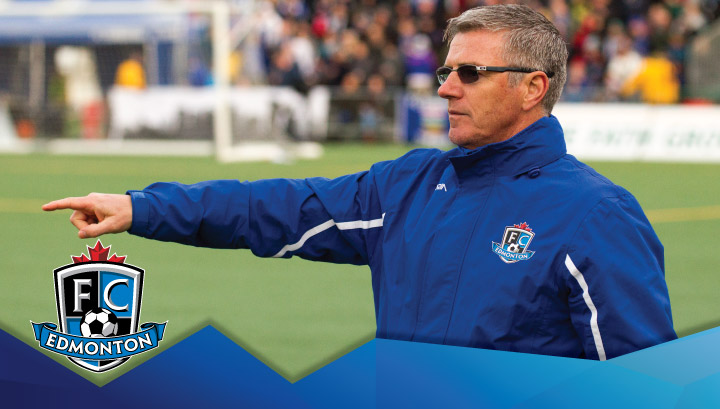 Miller on North Carolina defeat: “We didn’t do ourselves any justice”
April 17, 2017
by
Jamie Umbach | @JamieUmbach

FC Edmonton dropped its third match in as many contests to begin the 2017 North American Soccer League (NASL) season this past Saturday, April 15 with a 3-1 loss on the road to North Carolina FC.

Head coach Colin Miller’s men were down 2-0 in the first 22 minutes from a combination of quality finishing by NCFC and lapses in defence from FC Edmonton, leaving the Eddies with an early mountain to climb away from home.

“We spoke before the match of the quality [Lance Laing] has from free kicks and we were proven right as he punished us with a fantastic finish off a free kick that we shouldn’t have given away,” Miller commented. “The second goal came from poor defending and a good strike to the near post. Our players responded well for the most part in the second half other than going asleep for their third goal.”

“We didn’t do ourselves any justice [against North Carolina] from a defensive point of view,” Miller added. “We’ve come away from the first three matches of the season with zero points when we could’ve won [April 8] against Jacksonville and drawn the first game. When you go from the best defensive record in the league by a mile last year to a catalogue of errors early in the season, it’s disappointing.”

Despite the result, the Eddies can take positives from their performance in the second half, including the club’s first goal of the season scored by striker Tomi Ameobi. Offseason signing Dean Shiels also played a crucial role in the goal, heading midfielder Sainey Nyassi’s cross off the bar before redirecting the rebound to the left post for Ameobi to put home.

“It was great to see Ameobi score his first as he’d been playing very well the last couple of weeks without having any success, so I’m pleased for him,” Miller said. “Second half we showed a lot of character, continued to work and never dropped our heads, we kept working and made some positive substitutions all the way through to try and swing it on our favour and I thought in the second half we were arguably the better side.”

FC Edmonton looks to use Clarke Stadium to its advantage to break its slump this Saturday, April 22 at 7:00 PM MT against Puerto Rico FC. Tickets are available for purchase at tickets.fcedmonton.com! Go #AllTheWayUp with the club on social media this season by using the hashtag to win prizes and help reveal the history of soccer in Edmonton, both past and present.