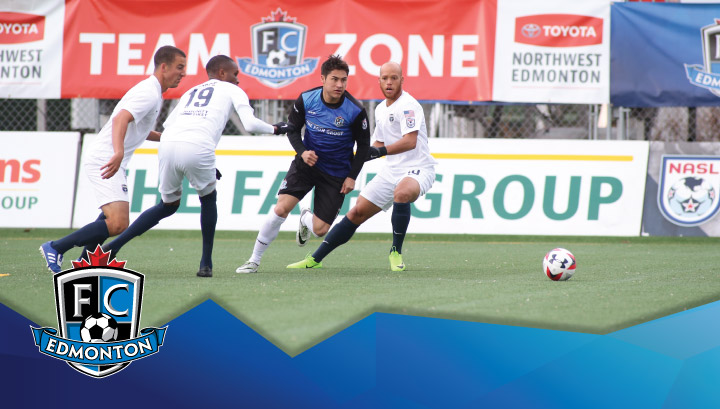 FC Edmonton hasn’t started its 2017 North American Soccer League (NASL) season as hoped, but the club is already beginning to show signs of offensive improvement early in the new campaign.

The Eddies have had more than a handful of positive looks towards goal in its first two matches despite failing to find the scoresheet against Jacksonville Armada FC. The club’s regular defense-first mentality remains embedded in its philosophy, but the action in the final attacking third has shown that the Eddies have the potential to be a major threat moving forward this season.

“I think the difference between last year and this year is we’re creating a lot more opportunities to score,” FC Edmonton captain Nik Ledgerwood said. “Last year we would maybe get one or two, but this season we’re generating a lot more chances to win the game.”

The crowd at Clarke Stadium this past Saturday got a snapshot of the Eddies’ offensive potential as they pressured the Armada relentlessly for their equalizer, but no sight of a goal. Defender Adam Straith came tantalizingly close in the 87th minute when the Victoria, B.C. product’s header from Ben Fisk’s corner struck the crossbar before Tomi Ameobi’s volley went just wide of the left post.

Through two matches of a 32-game NASL season, FC Edmonton enter Saturday’s clash with North Carolina FC knowing it’s only a matter of time before the goals find their way into the back of the net.

“As everyone probably saw in the stadium, it’s just one of those games where if we get one goal, we get a handful,” Ledgerwood added. “I think we still need to take the positives out of it because it’s still early in the season and we just have to keep working.”

FC Edmonton returns under the lights of Clarke Stadium on Saturday, April 22! Tickets are available at tickets.fcedmonton.com. Go #AllTheWayUp with the club on social media this season by using the hashtag to win prizes and help reveal the history of soccer in Edmonton, both past and present.