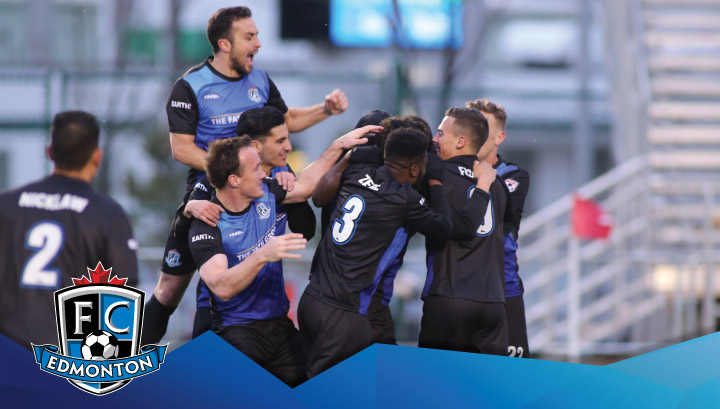 FC Edmonton head coach Colin Miller emphasized the importance of Saturday’s 2-1 victory over Puerto Rico FC as the club heads into a three-game, 10-day road trip beginning this Thursday when the club departs to Florida to face Miami FC on Saturday, April 29.

In addition to being the club’s first win of the 2017 North American Soccer League (NASL) season, the result had an extra bit of feel-good factor around it as changes to the line-up, both before the match and at half-time, played an important role in the Eddies earning the three points.

The Eddies used only 13 players as starters in a 4-5-1 formation through the first three matches of the season before making three personnel changes and the switch to a 4-4-2 against Puerto Rico. The late decision by Miller to keep left-back Netan Sansara out of the line-up due to a back injury allowed Pedro Galvao to step into a starting role, while Sainey Nyassi and academy product Allan Zebie earned their first respective starts of the season after serving only in substitute roles the previous matches.

“There’s been a sort of settled team at FC Edmonton for the first part of the season and the guys that came in did well,” Miller said. “We wanted a positive reaction to the result from last week, and we got that in abundance here. The group knew that we were very disappointing last week [in North Carolina] and we should’ve had more from the first two games of the season.”

In the second half, FC Edmonton’s bench players took over the match. Midfielder Mauro Eustaquio controlled the midfield in his first appearance with the club after coming on for Nik Ledgerwood to begin the half. After Ben Fisk replaced Nyassi in the 59th minute, the Canadian international found Corea two minutes later with a terrific pass that was finished off just as beautifully by the El Salvadorian international for the opening goal.

“I said to the players at half-time that we’d have to slow down a little bit because we were in such a hurry to do the right things that we actually caused our own problems,” Miller added. “I thought [Ben Fisk] looked very lively when he came on and had a couple chances himself, so that was a very positive substitution. [Mauro Eustaquio] had a very positive showing and made some terrific passes in his first appearance for the club.”

Saturday’s victory comes at an important time, as the club departs on a difficult three-game road trip against Miami FC, Ottawa Fury FC in the Canadian Championship and last season’s NASL runners-up the Indy Eleven.

“The players know themselves that we’re going to be a very good team this season and this is now a positive introduction to these next three games,” Miller said. “This is an amazing spell that we’re going into, beginning with arguably the best-assembled team in Miami FC. We needed these last three points — the players, the fans, and everyone involved.”