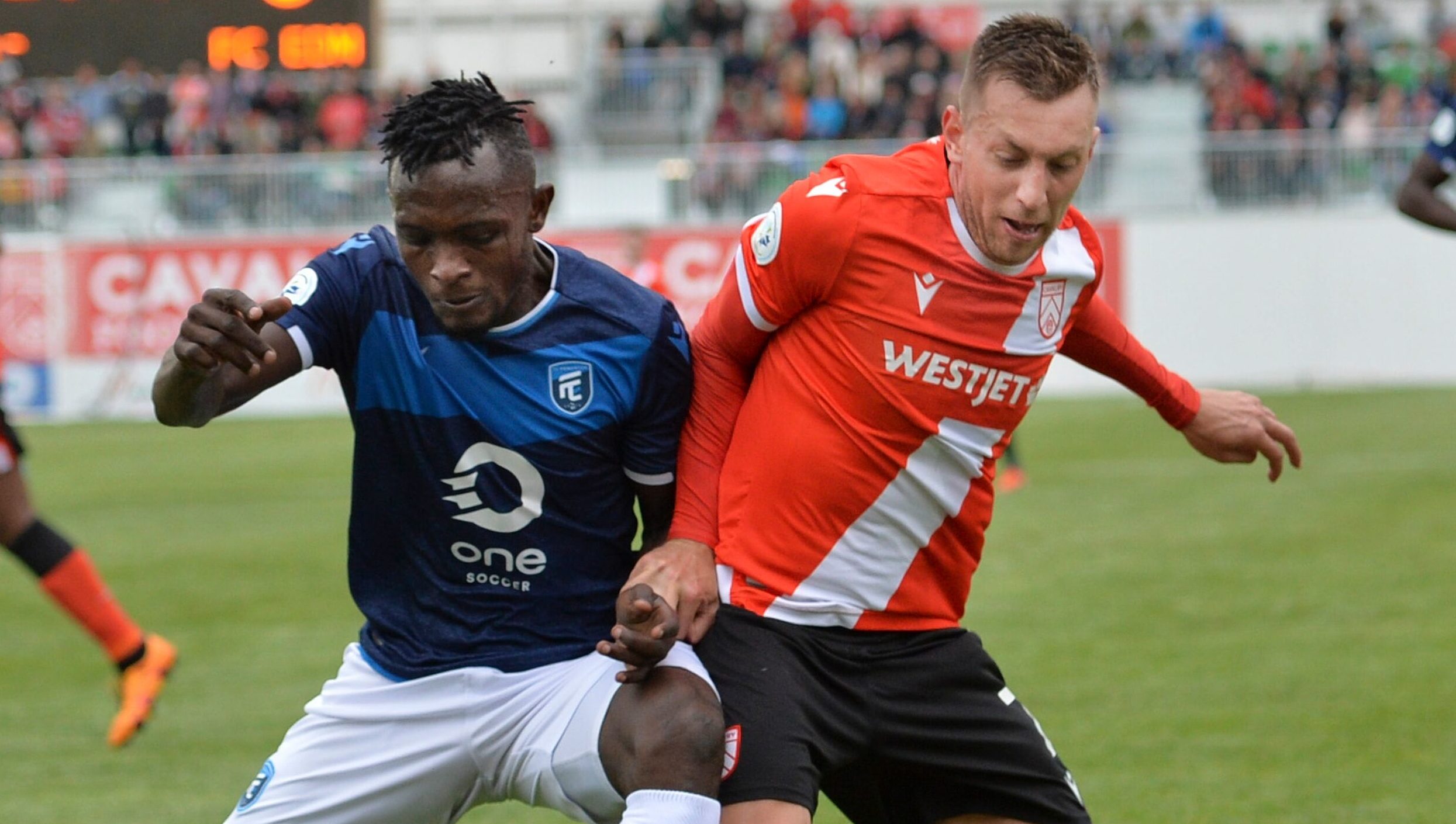 The Wild Rose Cup is back.

Al Classico rivals FC Edmonton and Cavalry FC will clash Tuesday night at ATCO Field at Spruce Meadows – the first match in Calgary since Leg 2 of the Finals 2019 nearly 700 days ago.

The all-Alberta clash is a fitting return to Spruce Meadows, which will have a new look (more on that later) and a mix of travelling supporters for a match with important early-season implications.

Cavalry sits in fourth place with the Eddies just behind them, three points adrift from matching their Alberta rivals at 14 points through nine matches. An FC Edmonton win, which would be their first against Cavalry in club history, would see them even on points for the first time since the first week of the 2019 Fall season, when they both started with victories on the opening weekend.

Alan Koch’s Eddies side snatched a decisive 3-1 win over Valour FC in their return to Clarke Field Saturday, rebounding after a 2-2-4 stint at The Kickoff in Winnipeg. Goals from strikers Easton Ongaro and Tobias Warschewski sent the home team firmly past the league leaders.

Cavalry’s return to home markets was far from impressive – dropping a 2-0 result to Pacific FC at Starlight Stadium. An early Marco Bustos goal stunned the Cavs who were short-handed going forward as Ali Musse and Ahinga Selemani missed out while Joe Mason and Sergio Camargo were both not fit enough to feature.

Cavalry and Eddies supporters elected not to give out the Wild Rose Cup in 2020, deeming the Cavs’ single match win at the Island Games as insufficient competition. Cavalry won the 2019 edition by posting a 4-1-0 record against their local rivals.

These two teams will meet in the Canadian Championship in two weeks at Clarke Field (Sunday, August 15), offering an all-Alberta rematch almost right away.

If FC Edmonton’s sturdy 4-4-2 shape at The Kickoff showed brilliance in glimpses, their win over Valour FC on Saturday showed its true potential. Koch’s side was difficult to break down, leaving Valour with three shots on target and one chunky deflection goal to take away.

Which brings us to the meta FCE has found in 2021: play for the clean sheet and see if your strikers can convert a chance or two. As lumbering attackers Tobias Warschewski and Easton Ongaro gain more confidence in the attacking third, as they clearly did with goals at the weekend, you wonder if that strategy will continue to be effective.

The pressure will be on Cavalry’s high-powered offence to be the difference Tuesday in Calgary, too, especially considering their last result. Tommy Wheeldon Jr. only fielded four outfield players on the substitute bench at Pacific, with Selemani and Musse missing along with Oliver Minatel and Richard Luca. Whether these players are injured or simply saved a flight to the West Coast following a busy Kickoff schedule is unknown.

Meantime, Wheeldon Jr. will likely have to go without Novak and Nik Ledgerwood due to yellow card accumulation after they both grabbed fourth cards on the weekend.

That being said, Sergio Camargo’s return after a weeks-long absence bodes well, as he provided a much-needed spark between the lines in 45-minute spurts for the opening handful of matches at The Kickoff.

ATCO Field will look much different to supporters on the ground and those watching in the stands Tuesday as the club debuts a new playing surface and state of the art lighting set up, both of which were installed this Spring. The stadium could get noticeably dark during the 2019 season – especially for television audiences – with a single temporary floodlight giving some visibility. There are now five permanent light stands while the resodded pitch at Kentucky Bluegrass has gotten rave reviews from Cavs players, offering a premier playing surface.

“I know a lot of people judge strikers just on goals and accolades, but that’s not what we’re about. We’re about the team first, and you can see Easton puts in shifts every single night. Toby puts in shifts every single night. Matt Durrans came off the bench against Valour, he put a shift in. So that’s what we expect from all of them, but it was very enjoyable to see them get rewarded.” – FC Edmonton head coach Alan Koch

“There’s going to be an emotion [in all games returning to home markets]. It was up to us to be party poopers against Pacific, we didn’t achieve that, and I’m sure the Eddies will be the same way, trying to make it hard for us.” – Cavalry FC head coach Tommy Wheeldon Jr.