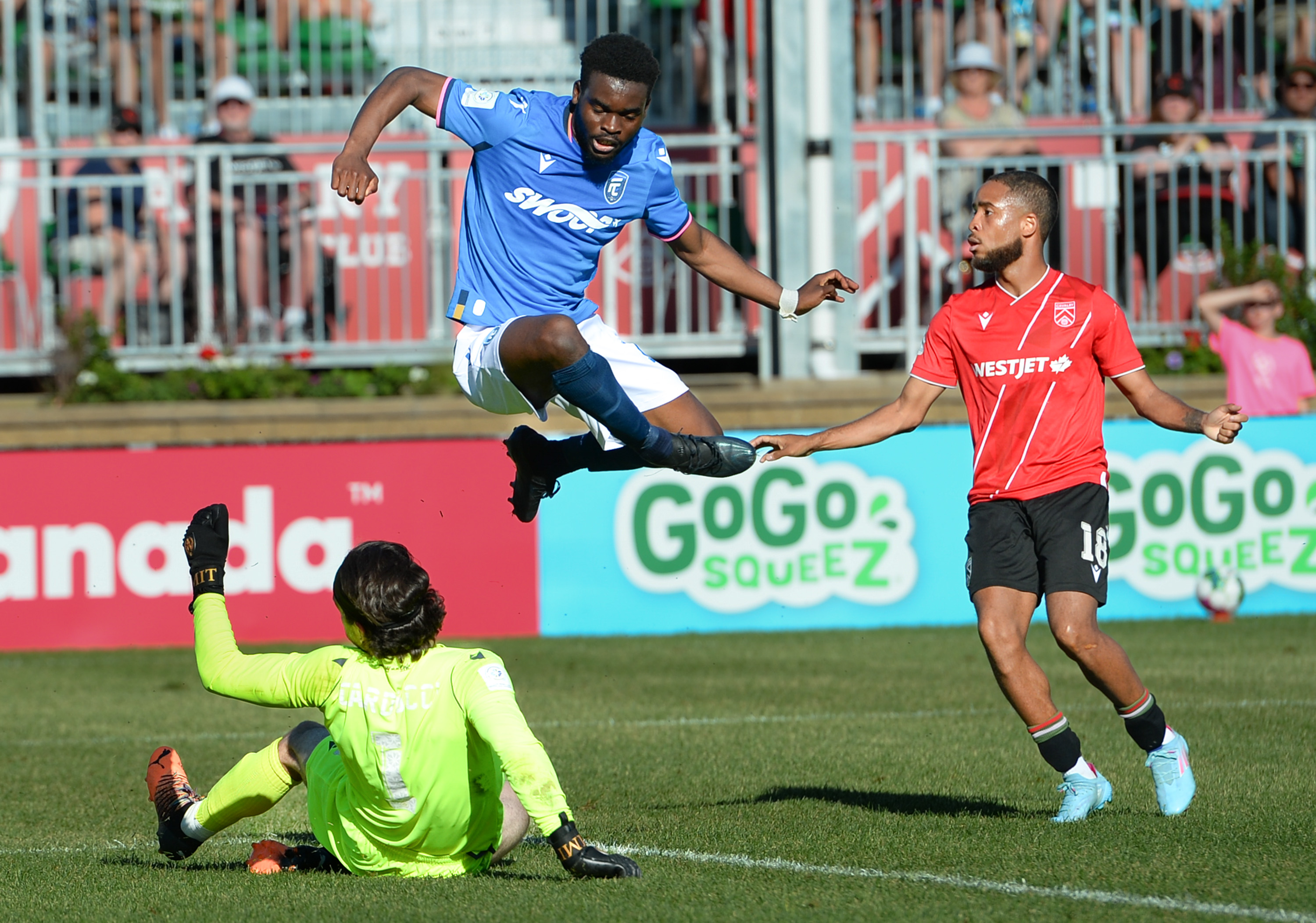 On paper, this year’s meetings between Cavalry FC and FC Edmonton have largely gone to script, with the Cavs continuing their dominant history against their provincial rivals. Cavalry has won all three meetings between the two sides so far in 2022 in all competitions, and a 3-0 win on June 26 was their tenth all-time against the Eddies.

But the 3-1 match, on June 26 at ATCO Field, was a lot closer than the scoreline indicated. FC Edmonton gave the hosts plenty of difficulties, doing something that very few visitors manage during one of the more challenging away trips in the league and outshooting the Cavs at home.

On Saturday, the goal will be to go a step further. Having still never defeated Cavalry, doing so would undoubtedly be the highlight of what has been a challenging season for the Eddies.

“We have something to prove to ourselves,” said FC Edmonton coach Alan Koch, “and we know we are going to face a good quality team who we have struggled against in the past. So we will focus on ourselves, we will focus on the performance that we want to put in, and we will see how the match unfolds.”

While their history against Edmonton has largely been incredibly positive, Cavalry has been making the wrong kind of club history lately.  A 3-0 away defeat to Pacific this past Friday was the biggest loss in Cavalry’s history, and after losing to Forge midweek they have now dropped three matches in a row for the first time.

They are still eight points clear of the playoff line, but Valour now has two games in hand, so the Cavs will want to stop the bleeding sooner rather than later. They will have extra incentive to do so in this match, as a win or a draw would mean clinching the 2022 Wild Rose Cup, a supporter-created trophy handed out to the winner of Edmonton and Cavalry’s regular season series.

“Every time FC Edmonton play us it is a cup final for them because they have never beaten us,” said Cavalry manager Tommy Wheeldon Jr. “So it actually is a cup final, one made by the fans, so actually it is a great incentive for our players because we talk about wanting to play in these big game experiences, Edmonton has had the full week to prepare. So they have an advantage coming into this game because they have been able to just focus on us, we haven’t.”

One uncharacteristic part of Cavalry’s recent struggles has been their lack of goals. The club has scored just once in their last three matches. But like when they faced a similar stretch to start the season, Wheeldon Jr. isn’t concerned about it being a long-term issue.

“We’ve got to get the service, we’ve got to get the structure, we will have more of the ball against Edmonton so with that we will create more opportunities,” he said. “Our set plays are as good as anybody’s, probably collectively in the world. Half our goals have been scored from that so I think we’ve always got a way of scoring goals. That doesn’t phase us.”

They will get some reinforcements in that department for this match. Both José Escalante and Bradley Vliet are available for selection. It is unlikely, however, that either Trafford will appear in this match, as Mason has been dealing with a minor injury, while Charlie is suspended. Jean-Aniel Assi will also miss out.

“We will focus on how we can continue that unbeaten streak against Edmonton and we will try to win that supporters’ trophy, which I think is important to our fans. So I think it makes for a really great fixture on a nice hot day on the weekend.” — Cavalry FC head coach Tommy Wheeldon Jr.