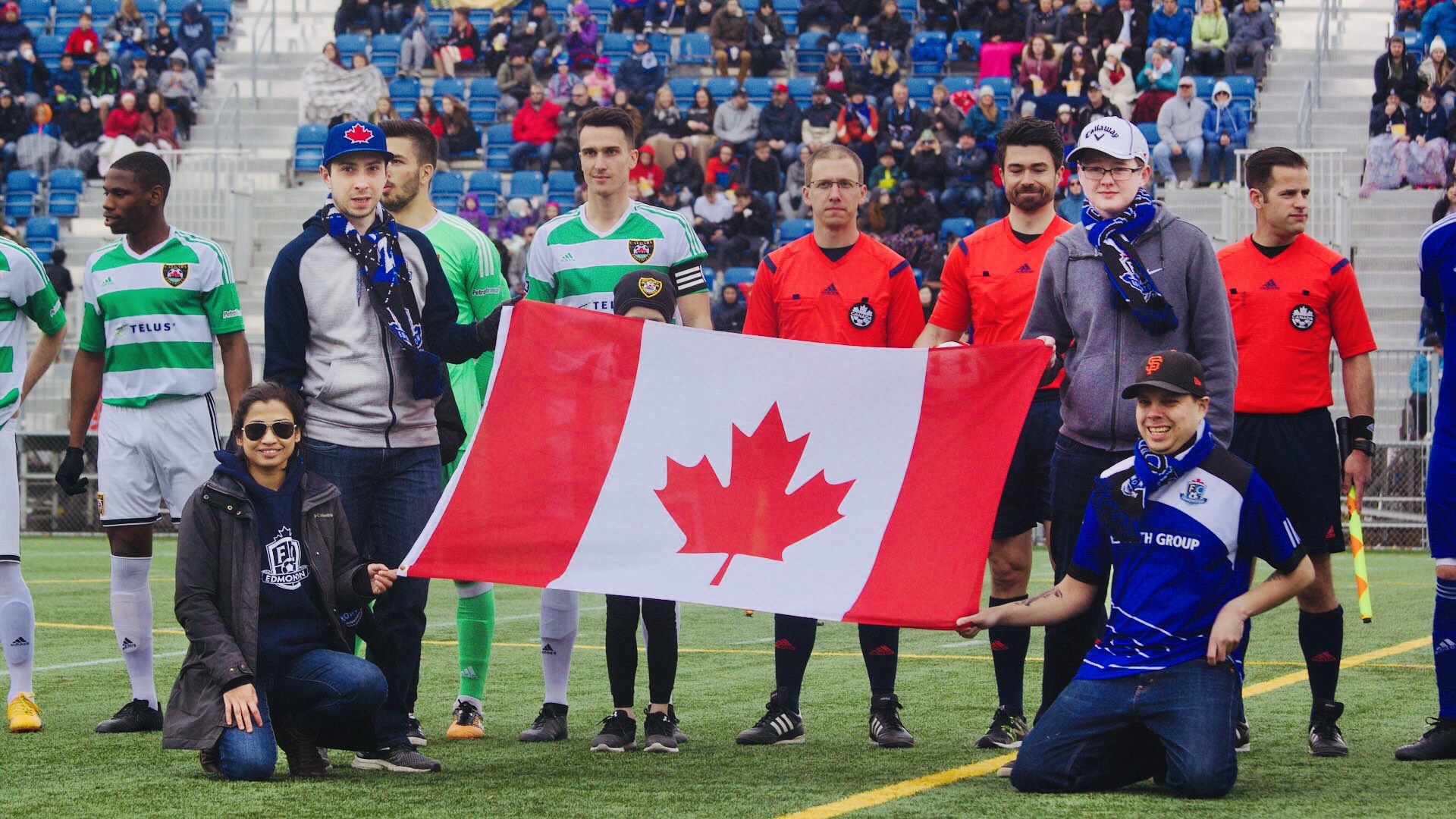 EDMONTON, AB. – Sunday’s edition of Al Classico was more than just a soccer game. It was a taste of what’s to come in the future of this sport in Canada. Despite FC Edmonton’s 4-0 loss to Calgary Foothills FC at a nearly full Clarke Stadium, there were plenty of positive takeaways from Al Classico.

The Eddies rolled back the year during the first half with many former players starting the match for Edmonton. Edmonton’s first ever goal scorer Shaun Saiko started the match with former captain Paul Hamilton and they were joined by the likes of Sam Lam, Edem Mortosi, Ajay Khabra, Mason James and Haris Kevac. Fans got to see not only the ex-players, but players more recently with the squad like Allan Zebie and David Doe. The Eddies were able to showcase the talented members of the FC Edmonton Academy in the second half as Technical Director Jeff Paulus fielded ten new players in the second half that consisted of only current and recently graduated academy members.

However, it was the visiting side started the match on the front foot as the capitalized on a couple defensive errors to take a two goal lead in the opening 10 minutes of the match. DuWayne Ewart opened the scoring with a finish from in close. Shortly after, Ahmed Musse latched onto a loose to fired a shot into the corner of the net. In the second half, Jackson Farmer made it 3-0 on the 55-minute mark after weaving his way past the Edmonton defence before scoring. Moments later, Tofa Fakunle added their fourth and final goal of the match.

“Credit to the first half group, it was the first time they’ve ever played together,” Paulus said post-game. “Most of them just came from indoor soccer, they haven’t played outdoor soccer all season. I also wanted to showcase the academy kids and what we do in the program. I have high hopes for several of these kids and I wanted these players to get a taste of what’s to come and the environment”

Edmonton and Calgary have played against each other in the past for friendly matches as it offers both teams the chance to test themselves against strong opposition. Both teams also have benefitted from both clubs having strong development programs within the organizations.

The Foothills currently have former FC Edmonton players such as Nik Ledgerwood, Bruno Zebie and Ajeej Sarkaria. While the Eddies signed a number of players from the Foothills youth system like Paul Hamilton, Michael Cox, and Niko Saler, just to name a few, in FC Edmonton’s early years of existence.

“We will compete on the field,” Foothills Technical Director Tommy Wheeldon Jr said. “But afterwards we will collaborate because I think in the end we all want the same goal and that’s to promote Canadian soccer. Right now, Ajeej is going into his third season with us and Bruno is going into his second and they have both been brilliant for us. When the NASL was here, there was no second team, so players like those two were in that in-between, playing in the university system.”

It was a great spectacle for all fans as they got to get a glimpse of the future and what could be in store for Edmonton’s soccer scene. It was also a positive sign for soccer fans in Edmonton as over 3000 fans showed up to cheer on the Eddies despite the not-so-great weather conditions. Al Classico was a clear indication that local talent and the worlds game is alive and well in Alberta.

“I think [everyone] saw a little bit of the importance of the Edmonton Calgary Rivalry today,” Paulus said. “This rivalry is massive for the Canadian Premier League (CPL), it drives football, it drives the passion and emotions of the fans. If we can create regional rivalries in the CPL, then it will take off like we saw today. And I think that’s the importance of Edmonton versus Calgary.”

Canadian Women’s National Team Goalkeeper Stephanie Labbe continued to break barriers as she came on in the final ten minutes for Marco Carducci. Labbe is a product of Edmonton, Alberta, having grown up in Edmonton most her life. Labbe has well over 100 caps in her professional club career and 50 appearances for the Canadian Women’s National team.  Labbe was previously with the Washington Spirits of the (NWSL) before taking a medical leave of absence. Following her departure in Washington, Labbe felt the right move was to join a men’s program and decided to train with Calgary Foothills in hopes of earning a contract.

The women’s national team keeper was called into action several times in the final 10 minutes of the match. The 31-year-old was forced to be sharp on her toes as she smothered a break away attempt before denying Edmonton a goal in the final minutes with a fine reflex save.

“She’s been phenomenal for us,” Wheeldon Jr said post-match. “Gender is a not an issue, I can’t speak highly enough of her. She is in the national team set up for a reason and she has 50 caps for a reason. She is world class.”