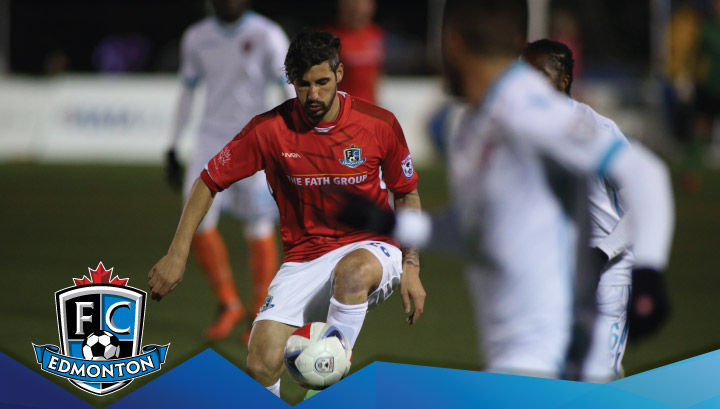 EDMONTON – A strong Miami FC side was too hot to handle in FC Edmonton’s final home match of the 2017 North American Soccer League (NASL) season, defeating the Eddies 2-0 on Saturday, October 21 in front of a boisterous crowd on Girls in Soccer Night II at Clarke Stadium.

Miami opened the scoring in the first half through Stefano Pinho and then doubled their lead in the second when Dylan Mares capitalized on a mistake on defence by the Eddies. FC Edmonton played the tail-end of the match with 10-men after second-half substitute Abraham Dukuly was sent off after receiving two yellow cards in quick succession.

“I thought it was a fantastic effort from the players,” FC Edmonton head coach Colin Miller said post-match. “It was the strongest squad Miami could have played tonight and I thought that was a compliment to our team. We were committed right to the end, but it’s disappointing with the quality of the goals we conceded tonight. [Miami] were the strongest team to ever play in Edmonton.”

Despite a strong opening ten minutes by FC Edmonton, it was Miami who would take the lead on 11 minutes. The visitors produced a strong spell in possession before beating the backline with a neat pass to Jamie Chavez. Chavez squared the ball to the back post for Pinho, who tapped the ball past Tyson Farago for the early lead.

Edmonton’s best chance of the first 45 minutes fell to Daryl Fordyce five minutes before the first half concluded. Sainey Nyassi pressured the Miami defence into a turnover before he found Fordyce with a low cross inside the box. Fordyce attempted to tap the ball into the net, but his effort went over Vega’s crossbar.

After the half-time break, the Eddies continued to push for the equalizing goal with the first chance fell to Fordyce shortly after the restart. The Belfast product found himself with space at the top of the box and fired a shot towards goal, but it sailed over the crossbar for a goal kick.

Miami should’ve double their lead just past the hour mark. After an in-swinging corner kick, Farago caught the ball but fumbled it just outside his six-yard-box. The loose ball fell to Poku, but his effort missed the empty net and went out for a goal-kick.

The Eddies gifted Miami another golden opportunity and this time the visiting side made no mistake. After an errand back pass from Nyassi, the ball eventually fell to Mares who curled a shot inside the back-post to give Miami a 2-0 lead.

FC Edmonton’s chance of mounting a comeback took a blow late on after the referee sent of second half substitute Abraham Dukuly for his second caution of the match. Referee Juan Marquez deemed Dukuly to have taken a dive inside the box for his first caution and the youngster received his second yellow for a late challenge on Lahoud before the full-time whistle.

The Eddies finish their 2017 campaign with two-straight road matches against Puerto Rico FC in Kissimmee, Fl. This Wednesday before a rematch with Miami FC to end the season on Saturday, October 28.