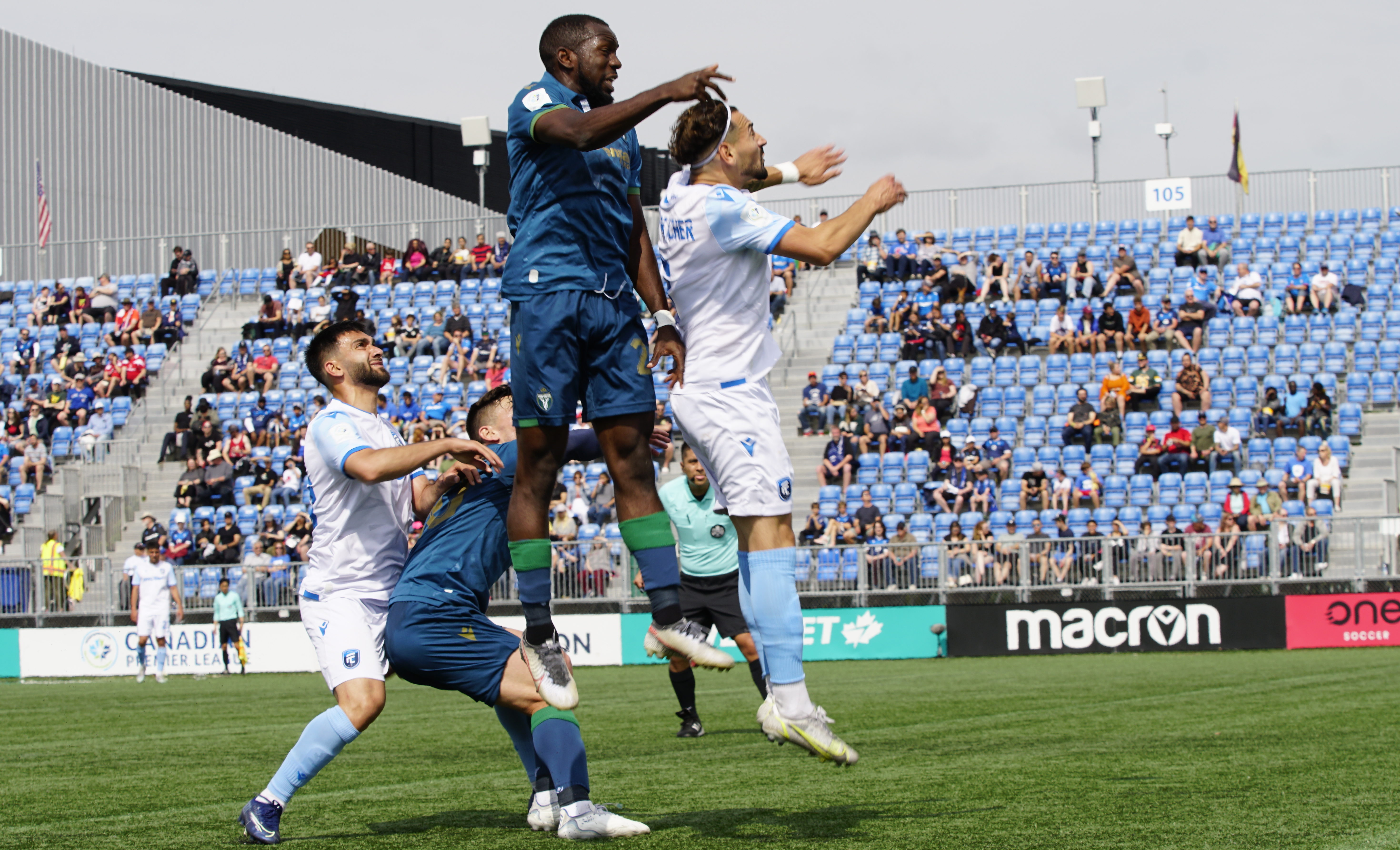 FC Edmonton picked up their second win of the season in a dominant 3-0 Canada Day victory over York United at Clarke Stadium. The result tied the club record for the biggest win, which came last September against Valour, also by a 3-0 margin.

The history didn’t stop there, as it was also their first win against York United in CPL action, coming in the league’s 300th ever match.

Bicou Bissainthe opened the scoring, while Gabriel Bitar and Mamadi Camara also got in on the festivities as Edmonton fired 18 shots at the net of debutant York United keeper Gianluca Catalano (6 on target).

An Edmonton counter-attack in the sixth minute was the first dangerous action of the match, as the home side was able to win a free kick in a dangerous area. Wes Timoteo’s threatening delivery nearly found the head of Nyal Higgins, but the Eddies defender was unable to direct the ball goalward.

York United threatened next, as Osaze De Rosario created enough space in the Edmonton box to get a shot off with some slick dribbling, but not quite enough to get that shot through to the goal. Lisandro Cabrera’s follow-up attempt was off target.

Edmonton then nearly capitalized on a mistake from Catalano, who came out of his net to try to cut out a long ball. Gabriel Bitar took the ball off the keeper, but was unable to curl his shot into the open net from a tough angle.

The Eddies then broke the deadlock in the 23rd minute. An excellent whipped-in corner kick from Timiteo this time connected with the head of Bissainthe, who found the back of the net for the second time in three matches.

Things looked like they were going from bad to worse for York on yet another corner kick a few minutes later. In an attempt to clear the ball, De Rosario handled it, and the referee quickly blew his whistle and pointed to the spot. Timoteo’s penalty, however, was saved brilliantly like Catalano to keep York in the match.

Proceedings settled down shortly thereafter, as that was the last real chance of the half for either side. As a result, Edmonton went into the interval with a 1-0 lead.

Max Ferrari had a pair of chances to equalize early in the second half. First, he nearly got on the end of a deflected cross in the Edmonton area. Then, moments later, De Rosario broke forward and played a clever ball into Ferrari’s path that the York winger, unfortunately, skied over the net.

Edmonton then caught the York backline sleeping in the 58th minute. Marcus Simmons played a brilliant ball over the top to Mamadi Camara who was completely unmarked in the box. Despite shouts of offside from the York backline, the goal was allowed to stand.

Just two minutes later, Edmonton added another. After Timiteo initially lost the ball in the York box, he won it back off of Jordan Wilson before crossing it to a wide-open Gabriel Bitar who converted to make the match 3-0 for the Eddies.

As York desperately pressed for any sort of consolation in the match, FC Edmonton continued to hit them on the counterattack, leading to several other chances. Masta Kacher had the best of those chances as he and Timateo broke through on a 2-on-1 break, but got his shot all wrong.

The win is Edmonton’s second in three matches, while York United has not won since May 6 in league action, a stretch of eight matches.