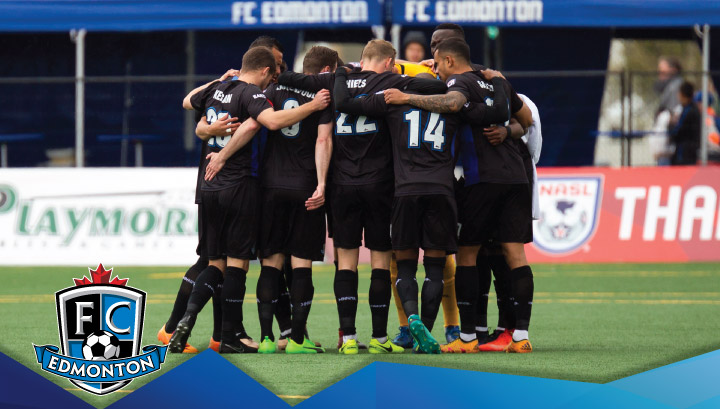 Rest and recovery for Eddies comes at pivotal point ahead of Indy clash
May 20, 2017
by
Kassim Khimji | @KassimKhimji

After a tough spell of five matches in 15 days, FC Edmonton continues to recharge with an off-week ahead of the Indy Eleven’s visit to Clarke Stadium on Saturday, May 27.

The Eddies took part in a full-squad intersquad game on Saturday afternoon to keep match fitness up after having its match this weekend against the New York Cosmos rescheduled to June 7. The change in schedule serves a benefit for FC Edmonton as well and captain Nik Ledgerwood welcomes the opportunity for he and his teammates to recover and regroup after a recent heavy fixture list.

“I think a break right now is good for us,” Ledgerwood said. “We’ve been playing in a lot of games and travelling a lot lately and it takes it out of you. I think it’s beneficial for everyone to sort of have a slow week, making sure they’re back to 100 percent and then we can get going for the next game.”

FC Edmonton returned to training on Thursday after a 1-0 loss to the San Francisco Deltas on Sunday. Ledgerwood insists that this week and a half heading into the Indy match will be vital as the players and staff prepare for a big clash with last year’s NASL finalists after already drawing the Eleven 0-0 earlier in the season on May 6 at Michael A. Carroll Stadium.

“We don’t want to keep falling back down the table, so this game against Indy will be massive for us to keep touch with the rest of the pack,” Ledgerwood said. “We’ve always matched up well against them, so it’s just getting the ball in the final third and having the quality and confidence that we can finish.”

Ledgerwood feels the experience within the squad is more important than ever at the moment, with every next game proving important in the fight to return to form following a slow start to the season.

“Every professional athlete needs to be accountable for their performances,” Ledgerwood noted. “It’s definitely important for the senior guys and some of the international players to step up and be leaders and role models to show how important this next game really is for the club.”