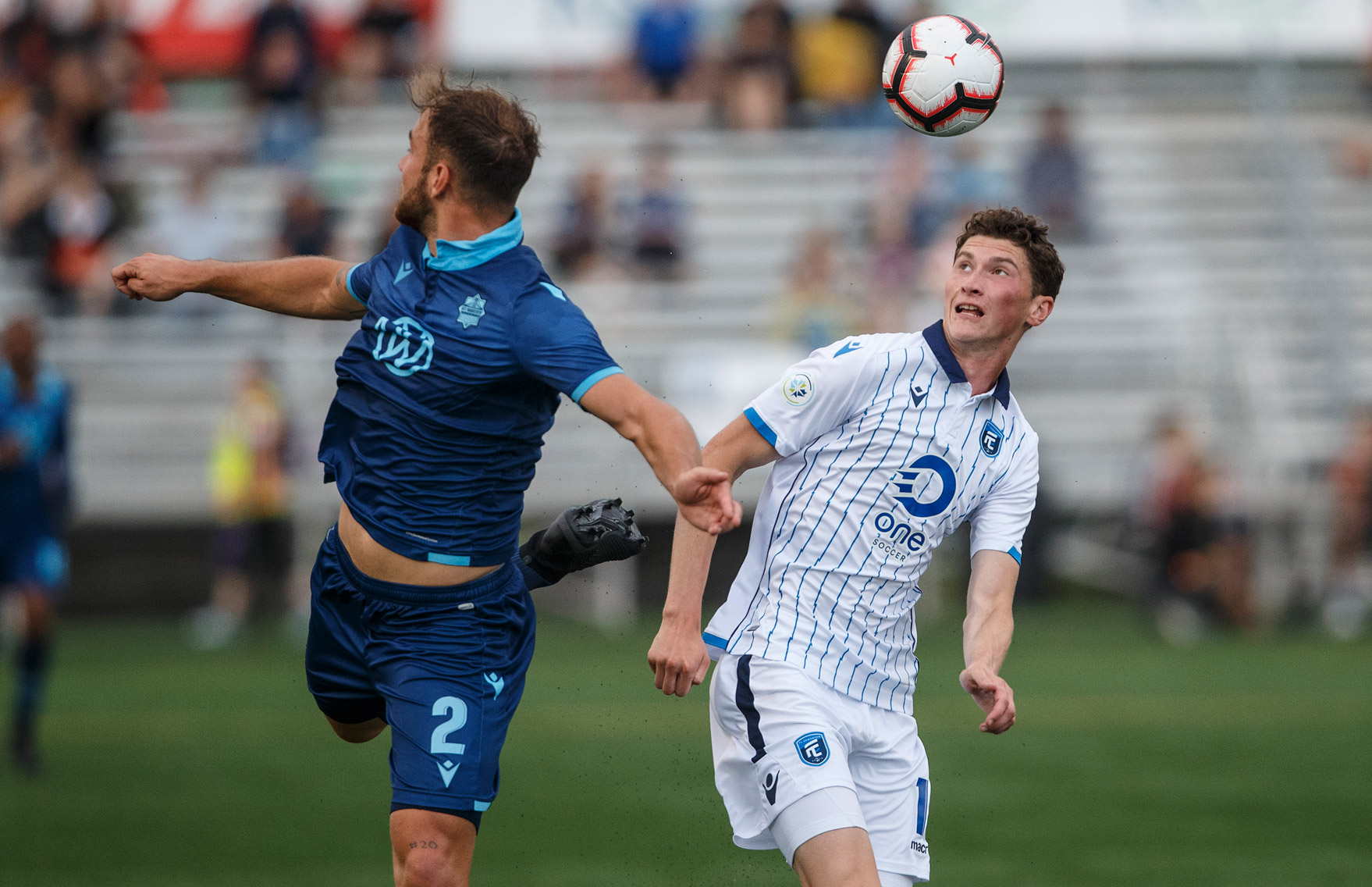 EDMONTON – FC Edmonton unveiled the latest iteration of its attacking lineup at Clarke Field on Wednesday, and if the ensuing 2-0 victory over HFX Wanderers was any indication, it could be a real headache for the rest of the Canadian Premier League.

Six-foot-six Easton Ongaro got his first CPL start, coming hot on the heels of his first-ever league goal in Saturday’s 1-1 draw with Forge FC. Next to him was six-foot-three Tomi Ameobi.

Ongaro opened the scoring in the first-half by heading home a Jeannot Esua cross, and then Ameobi made it 2-0 with a penalty just a couple of minutes into the second. Ameobi headed to the spot after Chrisnovic N’sa had to put a bear hug on the big striker in order to keep him from turning and shooting.

But, it wasn’t just the goals. Both of them were consistently winning first balls. Ongaro had a couple of efforts scrambled away off the line, too — including a shot from point-blank range that hit HFX centre back Chakib Hocine like a knockout punch to the skull.

FCE could have won by more, and probably deserved to be ahead by more than one at halftime.

“I was disappointed not to be up more at half time,” said FCE coach Jeff Paulus. “But I felt content with our performance and that we could see it out.”

“Just like the other day, another brilliant ball delivered in out wide,” said Ongaro of his goal. “I was in the right place at the right time, and the ball ended up in the back of the net.”

But Ongaro lamented a couple of other chances that weren’t converted.

“Especially the one that (Hocine) took off the face, actually,” said Ongaro. “It could have easily went in the net. I’d like to have that one back.”

With forward Oumar Diouck moved out to a wide spot, the two basketball players masquerading as soccer players simply had their way.

“He’s just this rare blend of height, his heading ability, that’s the second great goal he’s taken with his head, but his feet are fantastic for a big guy,” Paulus said of Ongaro, who was drafted by Cavalry FC, but later signed for his hometown team, as both clubs worked together to put the best interests of the player first. “I’ve got a special one here.”

The Wanderers have just one draw to show for their efforts on the road in league play this season. This was their eighth game in 25 days, and their fifth road game in a row over the last 14 days — counting league and Cup competition. Coming off a 6-2 loss to York9 on the weekend, this is a team that very much looked like it needs an extended break. But they play again Monday.

“But, you know the situation, we really needed to keep the ball and pass the ball better,” said Wanderers coach Stephen Hart.

“And I felt really sorry for (strikers Tomasz Skublak and Luis Alberto Perea) up top, just because they didn’t get any service. And then no penetration from the wide players whatsoever. And once all of that is happening, your game going forward is pretty stagnant and you use up even more energy trying to win the ball back.”

Ameobi said the Eddies came into the game wary that the Wanderers might pose problems, as any team coming off a bad loss would.

“But it was probably the first game this season where we felt like we were in control from start to finish,” said Ameobi. “We always knew it was going to be a tricky game because you’re playing a team coming off the back of a bad loss. But hats off to all the lads, this whole week in training regardless of that result… they did the business from start to finish.”