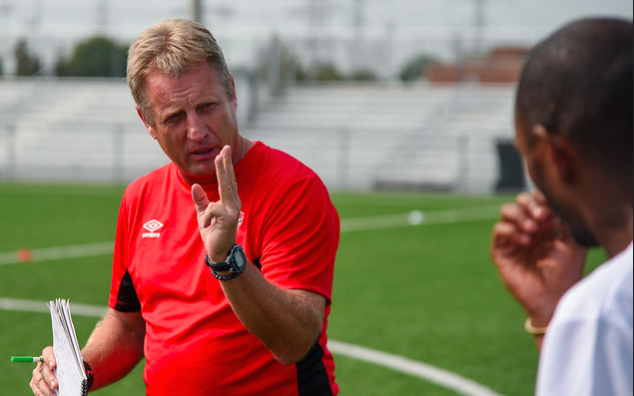 The under-17 FIFA World Cup is underway and it is an event that showcases the brightest players in that age category from all over the world.

“There were so many good moments,” Fleming said. “The experience made me realize as a coach I have to work so hard to keep getting better. That’s what it really did. It was great getting there. Going to one was unreal and going to two was surreal. But truly it humbled me in many ways. It’s an invaluable experience as a coach. You learn so much and I realized I had to get better and keep learning and pushing because you see the quality of football across the world.”

Fleming took the U-17 program to two consecutive World Cups. The first one in 2011 which took place in Mexico and in 2013 when it was held in United Arab Emirates (UAE).

Each location posed its own challenges in terms of atmosphere and overall environment.

“People from Mexico really love their football,” Fleming noted. “We had about 30,000 people come out to watch some of our games. If you weren’t playing good football, they would let you know.”

“In UAE the crowds were much smaller, but the heat and humidity was incredible,” Fleming recalled. “The tournament was in October, it cooled down a bit but it was just so hot and everyone from our side wasn’t used to it. So you never know how players will react to the various conditions.”

“It was an unbelievable experience,” Fleming added. “The first world cup we only lost one game to the eventual finalist which was Uruguay. Then we tied two matches, one was against England.”

The match against England was a match that really sticks for Fleming. They went up against an England side featuring the likes of Raheem Sterling, Jordan Pickford, Nathan Chalobah, and Nathan Redmond.

Canada went down a goal, but clawed back to earn a 2-2 draw. Striker Sadi Jalali scored a goal, as well as current Forge FC goalkeeper Quillan Roberts, who scored a dramatic goal, which is still the only goal to be scored by a goalkeeper in an international FIFA competition.

“What I love about that game was the fact we were not intimidated,” Fleming said. “They had some great players on that team. Some of those guys are part of the senior England team now.”

“We went down twice, but we kept going and it was a pretty dramatic match. The emotions amongst the staff during and after the match was incredible. England are a big player in the world stage, and we deserved the result. Even the England coach came up to me after and stated that we deserved a point out of that.”

A lot has changed in the Canadian soccer scene since the last time Canada qualified under Fleming. It’s been six years since then and now Canada has four professional academies and its own professional league. The overall landscape of soccer in the country has changed, in particular at the youth levels.

“When I first started the identification process for the camp, only 15 to 20 percent of the players were apart of MLS academies,” Fleming noted. “Back then I was very fortunate to have a great network of coaches in the country that helped identify players for me. Now, it’s different because it’s more formal and players are being monitored more. There are four pro academies and I would feel more prepared assembling a team together because I can call the academy coaches and ask about players, and get information about them.”

Then the second game becomes a must-win no matter what the outcome was in the first game. If you win, you want to win your second game to qualify. If you dropped points in game one, then you need a result in the second game to stay alive, so the pressure rises. Then the final game, if you didn’t win the first two, it’s a game that dictates the fate of your side in the tournament. You either go through or you go home.

That’s the case for the current U-17 side after suffering two defeats against Brazil and Angola. Canada conceded a last minute goal to Angola, which could prove to be crucial as the best third place team will progress. So that one point would’ve been vital for Canada.

“I love the Canadian character and that hasn’t changed,” Fleming added. “They’ll come back and give it their best. All the teams are good at these tournaments, there are no weak opponents. It’s about being best prepared and executing and they need a result now. It’s not impossible to progress on three points, because Argentina in 2011 went through as the best third place team on three points.”

Canada face New Zealand in their final group match in Brazil. Kick-Off is set for 5:00 p.m. MT and you can tune in on TSN.