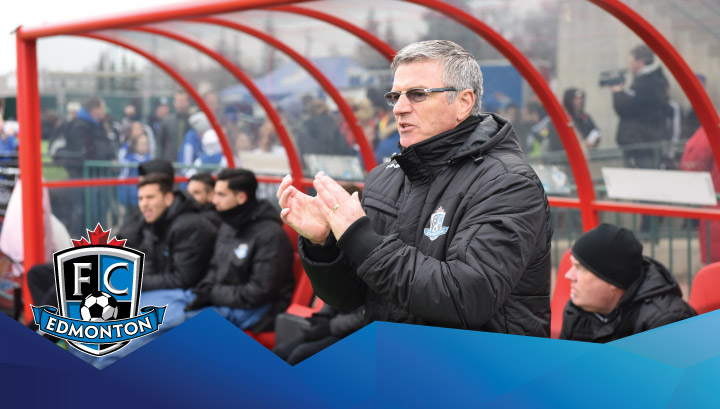 A 2-1 victory over Puerto Rico FC this past Saturday came at a crucial time for FC Edmonton as the club embarks on its longest road trip of the season — a three-match, 11-day away trip that began Thursday and includes match-ups with Miami FC, Ottawa Fury FC and the Indy Eleven.

The trip comes at an early but pivotal point in the season, with each fixture presenting its own unique challenges and talking points.

“We face one of, if not the toughest NASL opponents in Miami FC before traveling to Ottawa for the Canadian Championship,” FC Edmonton head coach Colin Miller said. “Then of course we play the NASL runner-up Indy Eleven a few days later. We have three very, very important and tough games ahead of us but we feel we have the squad capable of putting together a successful road trip.”

Led by former Serie A defender and manager Alessandro Nesta, Miami FC are a well-equipped side with the likes of midfielder Ritchie Ryan, goalkeeper Daniel Vega and forward Stéfano Pinho. The Florida side have proven hard to handle for FC Edmonton in the past, winning all three matches between the sides without conceding a goal.

A Canadian rivalry is renewed shortly after on Wednesday, May 3 when the Eddies face the United Soccer League’s (USL) Ottawa Fury FC at TD Place in Ottawa for the first leg of the Canadian Championship. It’s the first match-up between the former NASL rivals since Sept. 2, 2016, and the series is set to return to Edmonton on Wednesday, May 10 for the second and final leg with the winner earning the chance to face Major League Soccer (MLS) opposition in the semi-finals.

“It’s a very healthy relationship and rivalry between the two clubs,” Miller added. “[The Canadian Championship] is a competition we always look forward to because the incentive for winning is the chance to play arguably the biggest Canadian club in Toronto FC.”

An always-difficult visit to Michael A. Carroll Stadium, where the Indy Eleven hold the longest modern-day NASL home unbeaten streak, awaits FC Edmonton on Saturday, May 6 at the tail-end of the road trip. The Eddies fell 1-0 to Indy last season in The Championship Semifinals, ending their run to the Soccer Bowl.

Three fixtures in quick succession calls for a lot of man management and line-up shuffling, and Miller is adamant that every one of the 18 players travelling on the trip is capable of stepping in and doing the job at any moment.

“Everyone that’s here in this squad is good enough to play in our first-team,” Miller commented. “There will be an opportunity for every lad who leaves Edmonton with the team on Thursday to get game-time, and that’s what they have to be excited about.”