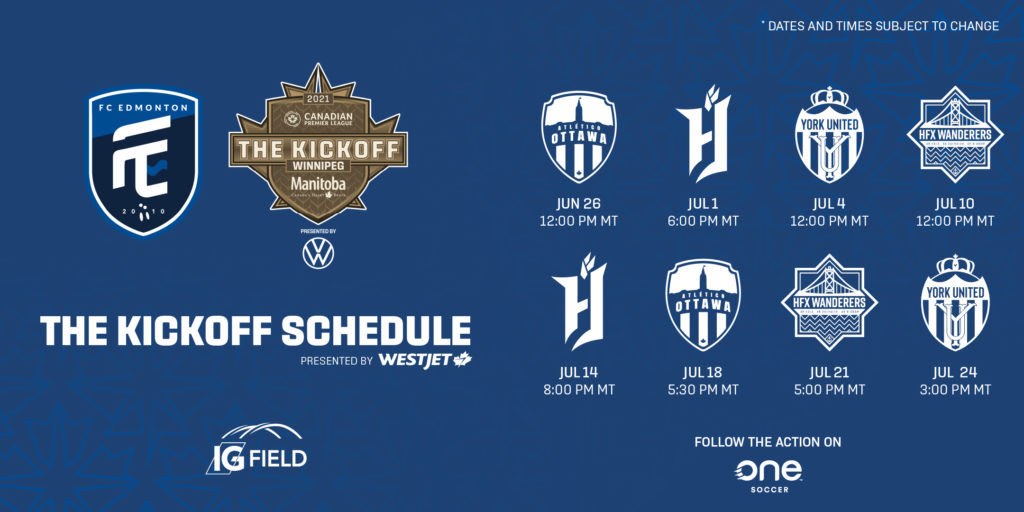 The Kickoff Presented by Volkswagen will commence on Saturday, June 26 with the League’s 2021 regular season’s first two matches and scheduled to conclude on Saturday, July 24. Schedule announcement to come on June 9.

The season will begin with each club playing eight matches (32 games total). All games will be played without fans in a sequestered environment at IG Field, the home of Valour FC in Winnipeg, Manitoba.

The League is committed to a full 28 regular-season match season that will follow a single table format that will provide fans with a more competitive season that creates more exciting matches right to the end of the season.

The CPL will continue to monitor health and safety protocols in all or Club’s cities at which point the potential of clubs returning to their home markets in front of supporters will be re-evaluated.

A capital city renowned for world-class performing artists and lively gatherings, Winnipeg is a cultural oasis. For thousands of years, the junction of the Red and Assiniboine Rivers has been a meeting place. Today, Manitoba’s capital city has evolved into the largest city on the Canadian Prairies. Located on Treaty 1 Territory, Winnipeg has been central to Indigenous gatherings, the fur trade, the railway, the grain exchange and is now known for its aerospace, technology, and creative industries, among others. From the turn-of-the-last century Exchange District, to The Forks, Osborne Village, and the beautiful grounds of the University of Manitoba campus on which IG Field is located, Winnipeg truly offers a range of cultural districts, a vibrant entertainment scene and of course, friendly Manitobans.

All matches will be played at IG Field, home of the Canadian Premier League’s Valour FC, the Winnipeg Blue Bombers (CFL) and the University of Manitoba Bisons. Established as one of Canada’s top soccer stadiums that has hosted major events including the 2015 FIFA Women’s World Cup, the facility earned rave reviews for both functionality and atmosphere. Completed in 2013, the magnificent 33,234 seat venue is not only state-of-the-art, but aesthetically among the finest in North America. Located on the University of Manitoba campus next to University Stadium.

The safety of everyone involved in this event is our top priority. The Canadian Premier League and all participants will abide by all mandated public health protocols and measures to execute this event. The CPL has developed strict health and safety protocols that have been approved by the MB Public Health Office. These include a responsible approach that manages risk for the residents of Manitobans, but also for our players and all other participants in the event.

Guidelines are in place for team testing before travel, during the first seven days and weekly thereafter, and players will be cohorted with their teams and only interact with other teams during matches. Additionally, essential personnel will be limited and proactive screening, monitoring, and tracking of participants will be documented to ensure the event is successful and safe.

Almost all the participants in the event are Canadian or will have been in Canada for quite some time following mandatory quarantine periods and are operating under strict Return to Play protocols. They also continue to follow all mandatory health protocols in their respective local markets. Any international players arriving in Canada before the event will travel to their home markets first, follow the mandatory 14-day quarantine period, and be tested before they leave to travel to Manitoba.

In partnership with the Canadian Premier League’s media broadcast partner OneSoccer, fans will: