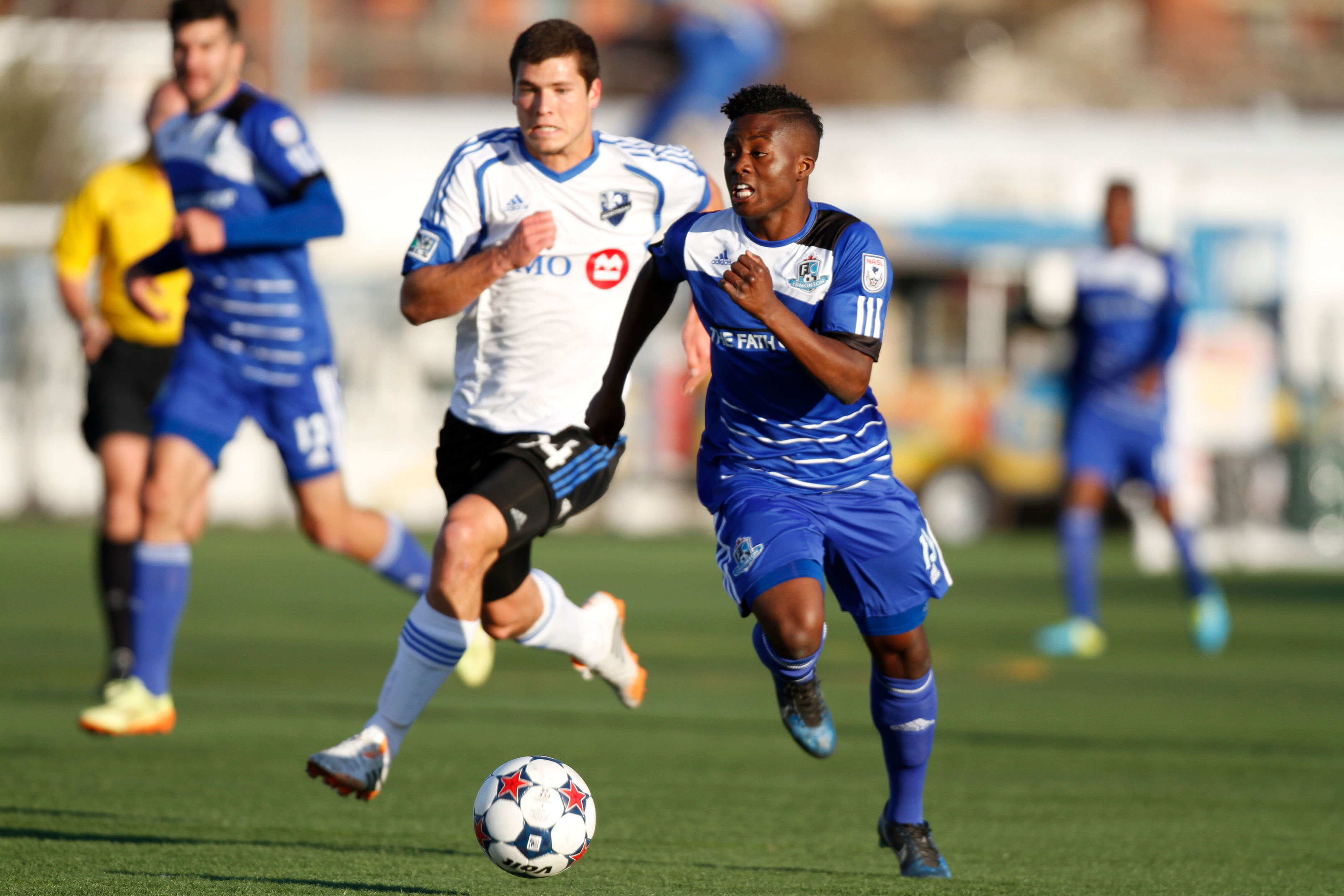 It’s been a long journey home for Hanson Boakai. The 23-year-old attack-minded midfielder made his way back to Edmonton this off-season after spending the last half decade playing in Europe. His name may ring familiar to some fans, as Boakai became the youngest player ever to play in a North American Soccer League (NASL) match when he suited up for FC Edmonton at just 16 years of age in 2013.

From that moment, the youngster seemed destined for greatness.

3 years after his debut, Boakai, who was dubbed the ‘Canadian Messi,’ made the decision to put his skills to the test in Europe. There he struggled to find his place, bouncing around various teams and leagues in Sweden, Romania, and Finland before ending up back where it all began.

A grown-up Boakai can now admit that the pressure of being deemed the next great Canadian soccer player was tough to handle at such a young age. “Not every teenager is having that kind of pressure. I didn’t know how to deal with it. Everyone was saying my name as a kid and it gets to your head. Your head gets bigger” he said.

“Now I know better of course, but as a kid who are you to know?”

While he appreciated being called the ‘Canadian Messi,’ it only added to the burden Boakai was now carrying on his back. “Messi is Messi” he said. “If somebody says you are the Messi of a country, it means you are basically the face of football. It’s a lot of pressure for a young player.”

Boakai now looks back at his time as a youth phenom through a matured lens, one that has been altered and changed by his time overseas. If he could go back and give advice to his younger self, he’d tell him to be calm and to just focus on his next objective. “You haven’t done it yet. Even though everybody’s telling you you’ve done it, you haven’t. There’s more to come.”

“Today’s important, but tomorrow is coming.”

That tomorrow did come, and it took the 18-year-old to Europe and away from his family, friends, and everything he had ever known. “That is one of the hardest things anyone can do. I went there as a kid.”

“You’re a young person and you’re alone. You need the right people around you and unfortunately for me I didn’t always have people around me to say ‘this is right’ and ‘this is wrong.’ I had to make decisions for myself.”

Boakai faced more than just social isolation during his time in Europe, he faced racial discrimination as well.

“Everywhere you go, even here, you deal with that” he said. “You’ll go to a country like Romania where you’re going to find yourself being one of the few people like yourself. It’s a shock.”

He recalls hearing fans chant and yell slurs at him trying to get into his head. “The way my parents raised me is to focus on myself and not to worry about what people say, because if you do, it’s over for you.”

His experience in Europe wasn’t all bad however, Boakai returns to Canada a more mature player not only off the pitch, but on it as well. His physical talents have been apparent the day his feet first found a soccer ball, so it was the mental aspect of his game that he set out to improve.

“In Europe it’s not about who’s the better player, it’s about tactics. You can be so good but if you don’t know where to be, you won’t get the chance to do what you’re supposed to be doing.”

“Whenever I had a break and I came back I was just surprised every time how different the mentality is – everything is different.” He then added with a laugh “it surprised me how healthy they eat compared to here.”

Boakai didn’t just play in Europe, he practically toured it, spending time with five teams across four different countries. “That’s one of the most frustrating things to me” he said. “I haven’t been able to settle. For a football player it’s good to move places but you have to settle down.”

Every stop along the way introduced Boakai to new cultures, teammates, and systems. It seemed before he could even get his footing he was off again and headed to a new team to learn from a new coach with a different mentality.

He hopes he can find that routine and familiarity he has been looking for in his return to FC Edmonton where he’ll be reunited with Jeff Paulus, a coach he knows well.

“Me and him go way back. When I was 15 before I signed for the first game he was my coach. He was the head of the academy.”

The two stayed in touch when Boakai made his way to Europe all those years ago, and Paulus became someone he would reach out to for not only soccer advice, but life advice as well.

“It’s one of the reasons I came here because I have a coach who understands me as not only a player but as a person. He basically raised me. I wouldn’t be anywhere else.”

Despite already having seven years of pro soccer under his belt, Boakai’s still just 23-years-old, and sees his best days on the field in front of him. Now a man, he returns to Edmonton with something to prove. “I want to do so well with the team. Not only for myself but for the city. They deserve it. It’s been up and down the past few years for Edmonton.”

Boakai looks forward to having the opportunity to not worry about the extra challenges he faced in Europe, and instead just focus on soccer. “Here, I have everything around me. I have my family, my friends. I have everything I need. Now all I need to do is play.”

When Boakai finally dons the Eddies blue again, he doesn’t want it to be a return, but a reintroduction. He wants to show that he is not the same person that got on that plane and flew across the world five years ago. He’s no longer an immature kid or an unpolished player.

“I want to be myself. I want to show people who I am as a person. Myself, me, Hanson.  Not the ‘Canadian Messi.’ My name is not that.”

He pauses for a second.

“My name is Hanson Boakai.”