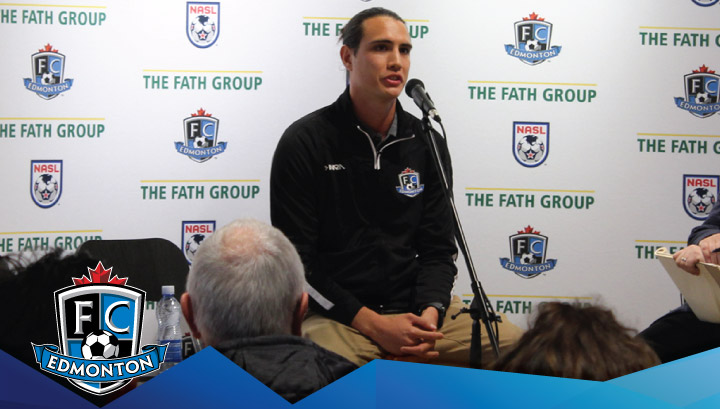 The Road to Recovery — Karsten Smith
May 17, 2017
by
Kassim Khimji | @KassimKhimji

As FC Edmonton’s 2017 training camp back in February entered its second week, centre-back Karsten Smith was hit with the harsh news that his season would have to start later than usual.

The Huntington Station, N.Y. product suffered a torn calf a week before the club’s scheduled preseason trip to Manchester, England from Mar. 9-22, forcing him out of training for over two months.

The 28-year-old worked closely with FC Edmonton athletic therapists Jose Jiménez and Brandon Salter in hopes of a speedy recovery, and continues to work vigorously in hopes of reaching match fitness as soon as possible after only just returning to full training this past week.

“I had to start from square one after my injury,” Smith said. “I could only swim and do gym stuff for a while. Slowly but surely, with the help of Jose and Brandon, I started to do more exercise to help strengthen my calf. I took about 8 weeks. It was a long process, but I’m really optimistic and I’m looking forward to getting back to it.”

Smith’s injury came at an unfortunate time because it meant that the centre-back would miss out on the pre-season training in Manchester. However, Smith was still present on the trip, where he began his recovery.

Smith would show up an hour-and-a-half before each training session to receive treatment, beginning his day with mobility work, manual manipulation and then power exercises in order to regain his strength and fitness. In addition to that, Smith was working with the University of Alberta to maintain and increase his strength. The six-foot-three defender also made changes to his diet in order to increase his chances of a healthy recovery.

“I’ve taken the time to explore Edmonton as well, I didn’t realize how beautiful the city is. I’ve been doing a lot of hikes and trail walks. It all really helped me learn the mental side of coming back from injury.”

The centre-back admits it hasn’t been easy watching his team play this season without being able to help them directly on the pitch.

“It’s frustrating because you can’t do anything physically to help out,” Smith said. “Especially when you see things in games that you think you can help out with. I’ve been trying to stay positive and I’ve had injuries before, but I’m really optimistic about coming back this time. I still feel very much a part of this team despite not being able to play, and I’m grateful to my teammates and coaches who also allowed me to travel with the team for preseason.

Smith signed for the Eddies during the Fall Season as head coach Colin Miller was looking to add more depth to his defensive line. Miller’s signing proved to be a good one as Smith was forced into action on the day he arrived from Pittsburgh Riverhounds, making his debut against Ottawa Fury FC on July 17, 2016.

“Consistency is key,” Smith noted. “I’m strong and I do believe I can compete with anyone in this league physically. I’m a possession-based centre-back and I have always been like that. If you combine my communication skills, with my technical and physical ability, I believe I can bring some calmness and organization to the team. We have good centre-backs and I know I have to wait for my opportunity. But I’m always working on improving my game and I’ll be ready when the coach needs me.”

FC Edmonton take a break from NASL action after next weekend’s match against the New York Cosmos was rescheduled to June 7. Next up, the Eddies host the Indy Eleven at Clarke Stadium on Saturday, May 27 at 7:00 PM MT, and tickets are available at tickets.fcedmonton.com!