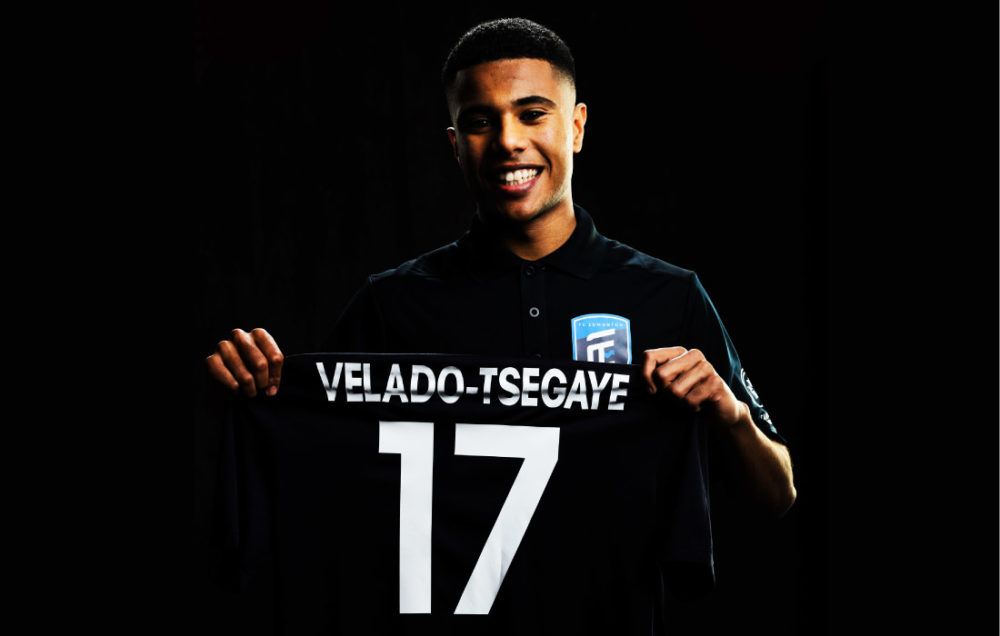 Marcus Velado-Tsegaye has checked off another box on his list of football goals. The 17-year-old has signed his first professional contract, and it is with his hometown team.

“This is something I have been dreaming about since the age of five when I first started playing football,” said Velado-Tsegaye. “To be given the opportunity to further develop as a player at home is something most athletes don’t get the chance to do, which is why it’s so exciting for me.”

The forward played his youth football with Xtreme FC, Edmonton Drillers and Edmonton Victoria, before joining the FC Edmonton Academy at the age of 14. Velado-Tsegaye feels having developed through the Academy, and playing at the U-16, U-18 and U-20 levels, makes this so much sweeter.

“The goal for all of us was to get a pro contract for the first team,” explained Velado-Tsegaye. “That is why this accomplishment feels amazing to me.”

Velado-Tsegaye is coming off a very successful summer with the Academy, scoring 11 goals in the Edmonton & District Soccer Association Men’s Premier Division, as the Academy won the league-provincial double. FC Edmonton Head Coach and Director of Soccer Operations Jeff Paulus believes Velado-Tsegaye has a real opportunity in the inaugural season of the Canadian Premier League.

“We were all given a glimpse of his incredible potential in the second leg of the Fall Al Classico, when he cut inside and beat Marco Carducci far post,” recalled Paulus. “Marcus has lightning-quick pace, very good movement off the ball and is always looking to break the line.”

Velado-Tsegaye scores against Cavalry FC in the Fall Al Classico

Joining the club alongside players like Prince Amanda and David Doe, who Velado-Tsegaye has played with for a couple of years with the Academy, adds a level of comfort for all three of the youngsters. Now comes a fantastic opportunity to learn from some veteran players going forward.

“We bring chemistry, and we’re young, so the older guys are teaching us how to be better as players because they’ve been through it all, they’ve been competing at a high level for a long time,” Velado-Tsegaye suggested. “If I’m playing bad they’ll tell me how to improve, and I feel like over the past couple of months I’ve been improving as a player.”

Velado-Tsegaye admits there are sure to be nerves as the club gets closer to the first match, but knows he’ll ease into things after his first couple of touches. After that, he’s out to prove he belongs.

“Coming in to this new league as a young, 17-year-old kid, I will look to make age irrelevant to performance and show everyone I am here to compete,” Velado-Tsegaye said. “We have a great team being formed with a good balance of youth and experience, and team chemistry that is through the roof.”

“This is what I think makes our club so special.”

FC Edmonton is a proud member of the Canadian Premier League, which kicks off on April 27, 2019. Season tickets begin at just $240! For more information, head to our website – https://fcedmonton.canpl.ca/season-tickets/