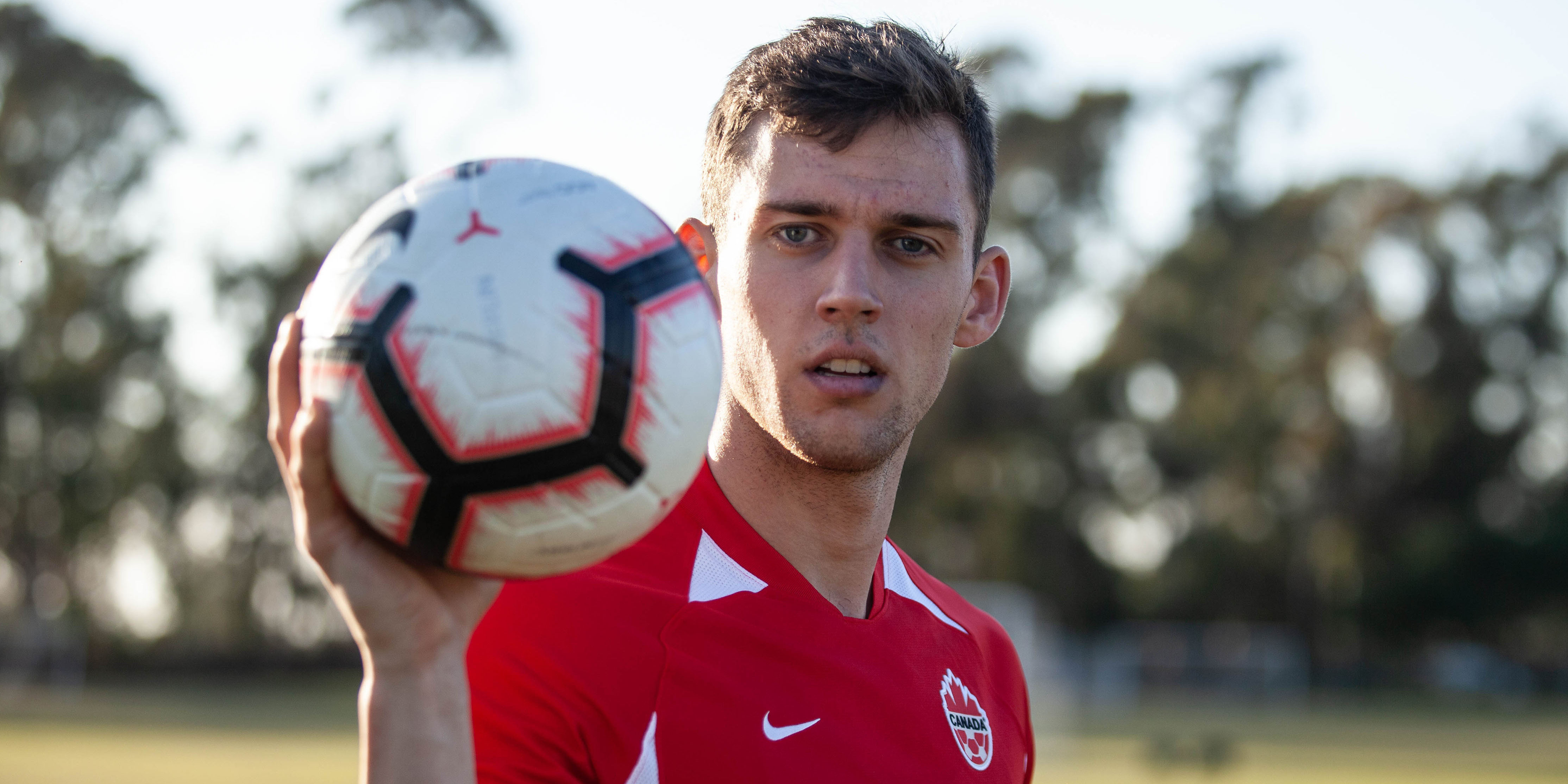 Looking down the Canadian men’s team roster at this month’s training camp in California, we all figured it might happen. With three Canadian Premier League players in the squad, and three games on offer, the question really became who will earn the first cap — no longer when will it happen.

The answer came in game two against Barbados. The name to remember for future pub quizzes? Amer Didic.

The defender, who played for FC Edmonton in 2019 (and, as a result of his CPL success, will now dip his toe into MLS waters once more, with the Whitecaps), was one of Canada’s standout players in the second 4-1 win over Barbados. He stood tall defensively, and he made further history by scoring Canada’s third goal off a set piece.

“It was a very, very exciting moment when I learned that I was gonna be able to put on the red and white kit,” Didic told CanPL.ca. “I couldn’t have asked for a better debut.”

Reflecting on his goal, he added: “There were a couple corner kicks before that where (Liam Fraser) put some sweet balls into the box and I mistimed one of them. So after the second one he was like, ‘Man, if you don’t score one of these goals I’m gonna be upset with you.’

“So the third one, it was a great ball in, and I just timed it perfectly so I was able to get it on target.”

That seasoned effort in his national team debut earned Didic the nod for Canada’s third game, last Wednesday against Iceland. The defender agreed that he must’ve done something in his first start to deserve the second, having beaten out the more experienced Manjrekar James and Derek Cornelius for the start.

Having joined Canada for three straight camps now, confined to the bench for both contests against the United States, Didic took the time to observe John Herdman’s tactics. He learned as much as he could, learning plenty despite not seeing any minutes in the first two camps. It was those experiences, he suggested, that made his transition into the lineup so smooth.

“I was able to meet the coaching staff, learn their style of play and their tactics,” Didic said. “I’d been in previous camps and know what the coaching staff want to see on the pitch. For me it was a matter of getting in there and performing those roles.”

Didic did attend a national team camp in 2017, under Octavio Zambrano, but he fell off the radar a little bit as he struggled to break into the Sporting Kansas City squad. He, in part, credits his resurgence to his CPL adventure.

After spending the better part of three years with Swope Park Rangers, then SKC’s USL affiliate (plus a brief stint at San Antonio FC), Didic signed for FC Edmonton with the hopes of rejuvenating his national team prospects. As it turned out, he’d go on to play 20 times for the Eddies, showing himself to be one of the CPL’s best defenders.

“Coming back into the league and playing for Edmonton, a goal of mine was to get on Herdman’s radar,” he said. “To even get called up was something. Now, playing two games for the national team is something that without the league I’m not too sure what would’ve happened.”

His success, as well as that of fellow January debutant Tristan Borges and two-time call-up Marco Carducci, is something Didic hopes will inspire more young Canadians in the CPL, who have now seen the extent to which Herdman and his staff are paying attention.

Heading into the second season, Didic expects to see the CPL’s contribution to the senior national team grow (not to mention the U-23 roster for Olympic qualifying). In his view, the regular minutes players get in a domestic league makes it easier for them to fit right into every camp, perhaps even more so than players relegated to benches elsewhere.

“It’s only gonna get more and more challenging and more rewarding for these Canadians playing in the CPL, now knowing that John’s watching every single game, week in and week out,” he said.

“Just seeing how all the boys from the Canadian Premier League fit in seamlessly, it’s very very positive. I could see a lot more in the future getting called up.”

It seems that, perhaps, Didic will be moving on from his time at FC Edmonton, having shown enough there to earn an MLS camp invite. It’s possible he could reunite in a backline with Derek Cornelius, with whom he shared centre-back duties in his national team debut.

Whether or not he finds his way back to Clarke Stadium, however, Didic has made history as a CPLer. He’s living, breathing proof of the benefits of coming home for Canadians.