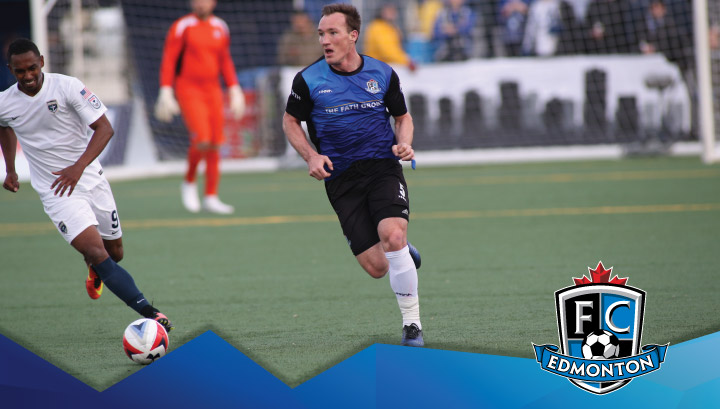 Centre-back Albert Watson’s experience and consistent play in defence will be important for FC Edmonton as the club chases its first win of the North American Soccer League (NASL) season on Saturday, April 22 at Clarke Stadium.

Watson has always been a consistent figure in the Eddies squad since signing from Linfield FC in 2013. The Northern Ireland product continues to be a dominant force in the back-line for Edmonton and earned himself a spot in the NASL Team of the Week for weeks two and three after two strong defensive performances versus Jacksonville Armada FC.

So far through three matches, Watson has won 20 duels and nine tackles, while coming up with 14 clearances and 12 interceptions. The veteran hopes he can continue his strong form throughout the 2017 campaign as the Eddies look to pick up steam throughout the coming weeks.

“It’s nice to get featured in the Team of the Week, but to be honest it doesn’t really matter much to me,” Watson said.  “I just concentrate on doing my best. The second game in Edmonton was one of my best games I thought. I was disappointed with some aspects of my play from last game [against North Carolina]. It just shows you that you’re only as good as your last game.”

The defender has played over 100 games for FC Edmonton and holds the record for most appearances in club history. Watson has been around to experience all the good and bad times in Edmonton and the defender knows there is no need to panic at this point of the season.

“We are only one point off where we were [at this point] last season,” Watson stated. “We just need to get back to work, get to the basics and we’ll be back on track. It’s a long season, we know what we have to improve. Things will pick up like it did last year.

“We have to be accountable for our mistakes and work harder. The experienced core has to step up our performances and drive the rest of the squad forward so we can get a result on Saturday.”

With Edmonton set to face Puerto Rico on Saturday at Clarke Stadium, Watson and his teammates have been working hard in hopes of securing the club’s first win of 2017. Watson knows if they keep training hard as a team, it is only a matter of time until Edmonton takes off this season.

“After Saturday, I have to dust myself off and get back to improving myself for the team and for myself,” Watson said. “I want to be on my best game every week.

“You win and lose as a team and you have to improve as a team as well. We have to work harder to get things right and that’s what we will do this week. We have fans who come and support us every single week and we have to put on a good performance for them.”

FC Edmonton welcomes Puerto Rico FC to Clarke Stadium this Saturday, April 22 at 7:00 PM MT. Tickets are available for purchase at tickets.fcedmonton.com! Go #AllTheWayUp with the club on social media this season by using the hashtag to win prizes and help reveal the history of soccer in Edmonton, both past and present.