EDMONTON — There are tough road trips, and then there’s the road trip that FC Edmonton is about to embark on.
Six matches.
49 days between home matches.
They will have travelled 26,626 kilometres when their road trip ends and they fly home on Aug.22.
The Eddies have certainly encountered a lot of adversity this season. But they will handle this challenge like they have every other obstacle this year — they’ll embrace it.

“One of my professional years, our team was on the road for a month. I’ve experienced it a little bit. It’s a bit of a crazy time. But it’s also a great learning experience and this is where you show your true character,” said Eddies forward Masta Kacher.
“We’re going to be almost like a family, but we have that feeling already in our locker room. We’re  working together every day trying to get better.”

The Eddies have yet to win a match on the road through the first half of the Canadian Premier League season. They earned a 1-1 draw against Valour FC on June 5 for their only point on the road.
They held a 1-0 lead until the dying moments of the match when Willy Akio scored in extra time to deny the Eddies their first road win of the season.

“It’s going to be a challenge, but we have to do what we can to try and get as many points on the road as possible,” said forward Mamadi Camara, who leads the Eddies in scoring with four goals this season.
“It’s so important for us to play for that 90 minutes, plus. You have to be turned on to all moments of the game, and those little moments where you lose focus can cost you points.”

This six-game road trip isn’t your ordinary road trip. Let’s just say they will be collecting a lot of frequent flyer miles this summer.
The Eddies will fly next week to play Forge FC in Hamilton on July 19, then head across the rest of the country to play the HFX Wanderers FC in Halifax on July 23.
They will return home and travel down the Queen Elizabeth II highway and face Cavalry FC on July 29 in Calgary.
They go back to Ontario on two separate trips to face Atletico Ottawa on Aug.7 and York United FC on Aug.14.
They finish off their road weary schedule against Valour FC in Winnipeg on Aug.21.

“This is just one of many challenges we’ve had to face this season,” said Kacher.
“It’s going to be a long grind, and we’re going to obviously miss home, but we have to get the most out this experience. Everything we face, we have to approach it with hard work and be ready to battle.”

After a real tough start to the season that saw FC Edmonton go winless in their first 11 matches, the Eddies have turned a big corner.
They earned their first victory, with a 1-0 win over Atletico Ottawa on June 19, and then earned a 3-0 win over York United FC on July 1.
They’re 2-2 in their last four games and have continued to show significant growth from where the club was playing at the beginning of the season.
Earlier in the season, they may have been outmatched in some of their matches, but they always showed a no quit mentality.
Now, chemistry and confidence is building amongst this young group, and they haven’t lost that no quit mentality.

“It’s a big road trip, but we’ve learned a lot of lessons from earlier this year playing on the road, and our team has grown a lot,” said midfielder Wesley Timoteo.
“We’ve built a lot of chemistry, and we’re ready to fight for each other on the road.”

The club is getting major contributions from the likes of midfielder Gabriel Bitar, who has scored in three straight matches. Timoteo is tied for the CPL lead in assists with five and Camara leads the team in goals with four and has become a dangerous threat up front, after switching from his natural position of midfielder.
Defensively, Bicou Bissainthe has provided stability to the Eddies back line, and he has become a threat on corner kicks, having scored twice in Eddies both wins. The likes of Luke Singh and Nyal Higgins are carrying the load along with Bissainthe on the back line. Higgins and Singh lead the CPL in interceptions.
And in goal, Andreas Vaikla leads the CPL in saves with 42, while recording three clean sheets.

“We have to show that we’ve matured and grown and we have to show complete performances,” said Camara.
“It’s going to be a real test for us, but we’re all embracing it. We can sit here and find all the excuses, but at the end of the day, we have a job to do, and we’re paid to win games, and we have to do everything we can to achieve that. Winners find ways to get wins. That’s all that matters, and we’re going to give it everything we’ve got each game.” 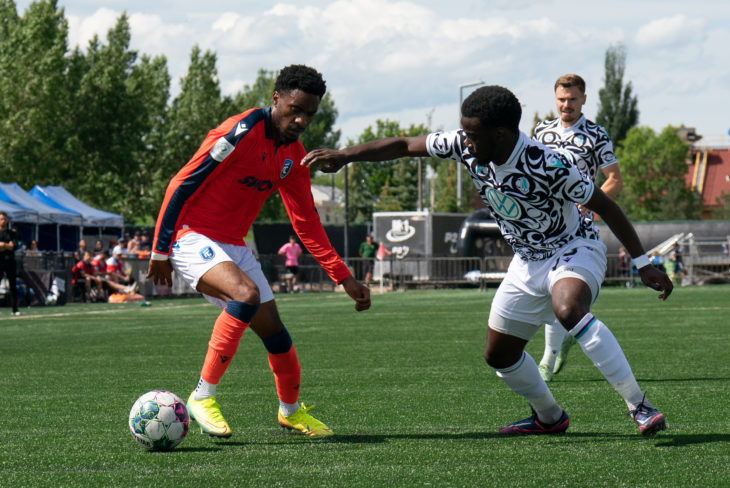