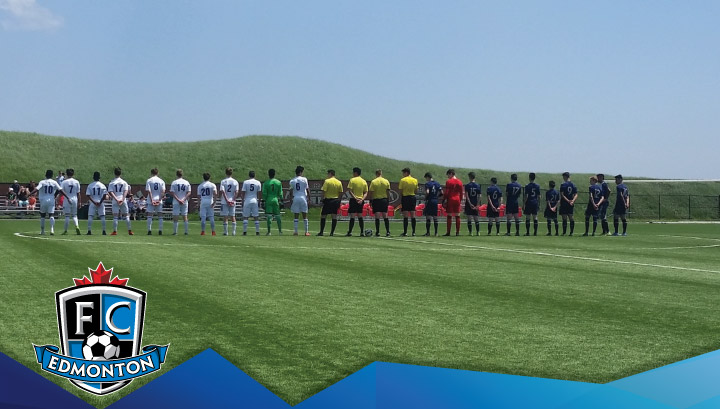 The FC Edmonton Academy was among the nation’s best at the Canada Soccer U-15 Showcase and identification event from May 15-19 in Toronto, ON, competing against a Canada select side and the academy/residency programs of Major League Soccer’s (MLS) Vancouver Whitecaps, Toronto FC and the Montreal Impact.

As part of Canada Soccer’s Men’s EXCEL Program, the U-15 showcase provides Canada Soccer with an early opportunity for both education to young players as well as scouting by national, provincial/territorial, and professional coaches.

The FC Edmonton Academy left the showcase with three competitive 1-0 losses to Toronto, Montreal and Vancouver and a 4-1 defeat to the Canada selects, but the experience goes far beyond results at this high of a level of development. It’s a rare opportunity for the Academy to test itself against highly-skilled opposition, and a rare chance for FC Edmonton Academy Technical Director and Assistant Coach Jeff Paulus to evaluate the U-15’s development against other Canadian academies.

“The level of play was fantastic all week,” Paulus said. “You’re not going to see a better player in Canada at that level anywhere else, and the experience of our Academy facing that level of talent is the best you can get for the U-15 age group.

“It’s a learning experience for everyone involved. Making sure at this level that our players are playing the way we want them to is important. If you lose a match playing your system, you can hold your hands up and look beyond the result, but if you win you feel an even greater sense of accomplishment.”

Entering its fifth year, the Academy took an important snapshot at the showcase of the quality expected to compete with Canada’s elite. This level of competition is something Paulus hopes becomes more regular in order to provide the players more opportunity for growth.

“As a smaller academy, we only get better by knowing the level of opposition expected,” Paulus added. “We have to try and replicate that level of competition, because here we faced four quality academy sides, three in the MLS, that were technically very good and tactically organized. Everything those clubs do in their academies goes towards development.

“If kids get that experience every week, then our game will take a big jump, and that leads to overall better players which in time makes for a better Canadian Men’s National Team program.”

Paulus’ Academy evaluations extend to this weekend, beginning Friday with a FC Edmonton U-17 Academy 2-1 win over Toronto FC.

“Today was an Academy check for us against Toronto and we passed the test,” Paulus said. “It was a huge challenge for our development model. Although the mindset stays mostly the same, but in this age group we want results as there’s an element to winning at this age.”

The Umbro Showcase runs from May 19-22, pitting the U-17’s against Ontario academies North Mississauga, Markham, and Wexford Soccer Club, where Jeff got his start in soccer as a kid.

“[The Umbro Showcase] is about university scouts seeing our players and helping our players earn scholarships,” Paulus said. “If we’re able to help these players work towards educations, the trip pays itself off.”