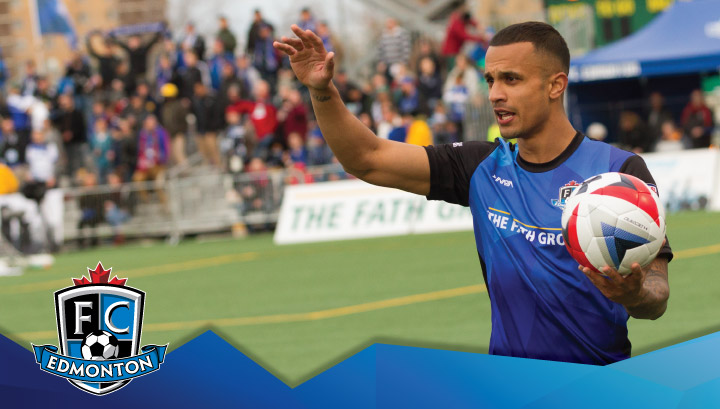 The Eddies were held scoreless in two tight 1-0 losses to Jacksonville Armada FC to begin the season before falling last weekend 3-1 against North Carolina FC. Striker Tomi Ameobi scored the first goal of the season for the club in the loss, with off season signing Dean Shiels notching his first point as an Eddie with an assist on the play.

Strong finishing from North Carolina paired with defensive errors from FC Edmonton resulted in a 2-0 deficit early for the Eddies last weekend in Cary, N.C. The league’s best defence from 2016 has been tested early this season through its first three fixtures, and the club knows the best way back to success is to re-establish itself defensively in all areas of the park.

“Our [defensive] shape against North Carolina was all over the place and they had tonnes of space to play with,” FC Edmonton assistant coach Jeff Paulus said. “We need to be better on the ball, we need to be faster when in possession, and we need to keep the ball and play out the back. We cant afford to keep giving the ball away in our half.

“You always ask players to win their one-on-one battles, and I think most players will say they want to step up their game as well. These players are honest and understand that here, so we need to collectively make sure we’re ready for Saturday.”

Puerto Rico FC have opened its 2017 campaign with three straight draws, earning a 1-1 result with the Indy Eleven last time out. Forward Hector Ramos scored his second goal of the season in the stalemate and looks dangerous early in the season alongside forward Jairo Puerto. The pair have combined for 21 shots in the first three matches of the season.

Defender Karsten Smith remains the only player in question for the Eddies after sustaining a lower body injury in preseason, but the New York native is nearing a return to full match fitness.

“Saturday is a massively important game,” Paulus added. “You never want to start a season with four losses. We are not far off from where we were last season — only one point — and we made the postseason then, too. We know we are in a situation where we need to win this game, and it’s certainly one of the more important games we have played in a long time.”

FC Edmonton welcomes Puerto Rico FC to Clarke Stadium this Saturday, April 22 at 7:00 PM MT. Tickets are available for purchase at tickets.fcedmonton.com! Go #AllTheWayUp with the club on social media this season by using the hashtag to win prizes and help reveal the history of soccer in Edmonton, both past and present.